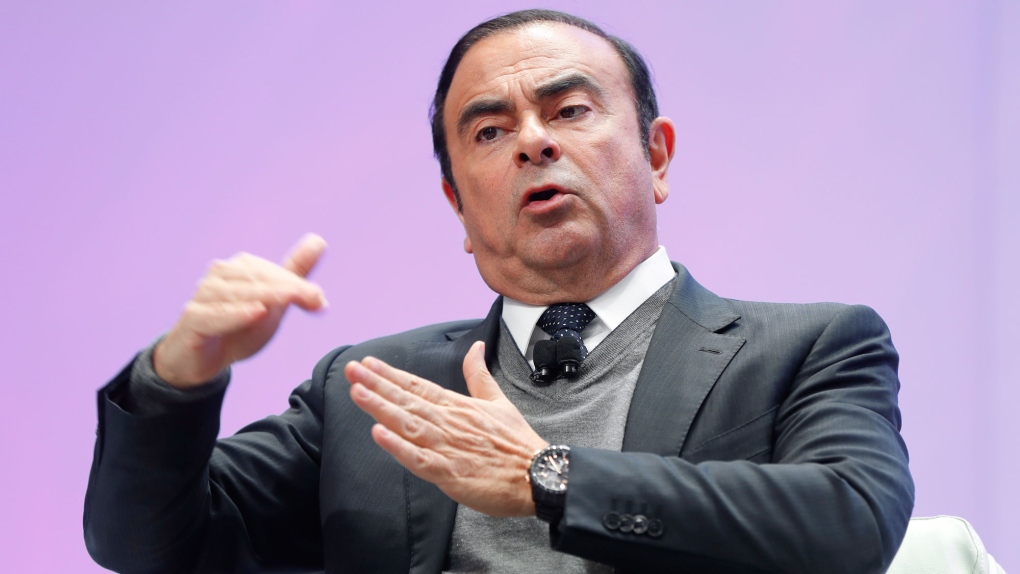 TOKYO -- Nissan said Tuesday it will still pursue legal action against its former chairman, Carlos Ghosn, despite his escape from Japan to Lebanon.

The Japanese automaker said in a statement that Ghosn engaged in serious misconduct while leading the Nissan-Renault-Mitsubishi alliance.

"The company will continue to take appropriate legal action to hold Ghosn accountable for the harm that his misconduct has caused to Nissan," it said without giving details.

Japan and Lebanon do not have an extradition treaty. Experts have said it would be difficult to bring Ghosn back to stand trial in Tokyo. Chief Cabinet Secretary Yoshihide Suga said the situation had to be handled carefully.

Ghosn faces charges of financial misconduct. He managed to skip bail and leave the country despite heavy surveillance while he was staying at a home in Tokyo.

Japanese news reports Tuesday gave new details of that escape, saying he left his residence alone, met two men at a Tokyo hotel, and then took a bullet train to Osaka before boarding a private jet hidden inside a case for musical equipment. Prosecutors are investigating why the cargo was not inspected before it was loaded, the broadcaster NHK and financial newspaper Nikkei said, citing unnamed sources.

The jet used, made by Canada's Bombadier, is designed to allow easy access between its passenger and cargo compartments.

The Nikkei report said dozens of people in various countries helped to plan his clandestine departure.

Nissan's statement was the first word from the company since Ghosn's flight last week. The automaker and Japanese prosecutors allege Ghosn misstated his future compensation and diverted company assets for personal gain. He says he is innocent.

Ghosn has not appeared in public since arriving in Lebanon. He is expected to give his side of the story in a news conference planned for Wednesday in Beirut.

Earlier, he said the allegations against him were concocted by Nissan, Japanese authorities and others who wanted to block efforts toward a fuller merger between Nissan and its French alliance partner Renault SA.

Ghosn said in a statement last week that he wanted to escape "injustice." Critics of the Japanese judicial system say his case exemplifies its tendency to move too slowly and keep suspects in detention for too long.

Nissan said in its statement that an investigation is ongoing in France, and the U.S. Securities and Exchange Commission has found some wrongdoing.

Ghosn has not been charged in France or the U.S.

Japan's Justice Minister Masako Mori said Japan would tighten border control precautions to prevent a recurrence. She did not confirm reports that Ghosn left via the Kansai Airport in Osaka, hidden inside a musical equipment box as he was brought aboard a private jet and flown first to Turkey and then to Lebanon.

Mori told reporters Tuesday that all airports will be required to check all cargo and luggage, including items destined for private jets.

She reiterated her defence of the justice system and denounced Ghosn's escape as an "unjustifiable" crime. She said each nation's system has its own way of making arrests and granting bail.

The scandal over Ghosn's case has tarnished Nissan's image and created a leadership vacuum at a time when the automaker's profits and sales are tumbling. Ghosn's successor Hiroto Saikawa also resigned last year amid financial misconduct allegations related to questionable income.

"Nissan will continue to do the right thing by co-operating with judicial and regulatory authorities wherever necessary," the Yokohama-based company said.

Although Ghosn is unlikely to face trial in Japan, Greg Kelly, another Nissan former executive, is still facing charges of under-reporting Ghosn's future compensation. He says he is innocent.

Kelly, an American, who is out on bail, has not been charged with the breach of trust allegations Ghosn is also facing.

Nissan has also been charged as a corporate entity. The company says it won't fight the charges and will pay the required fines.