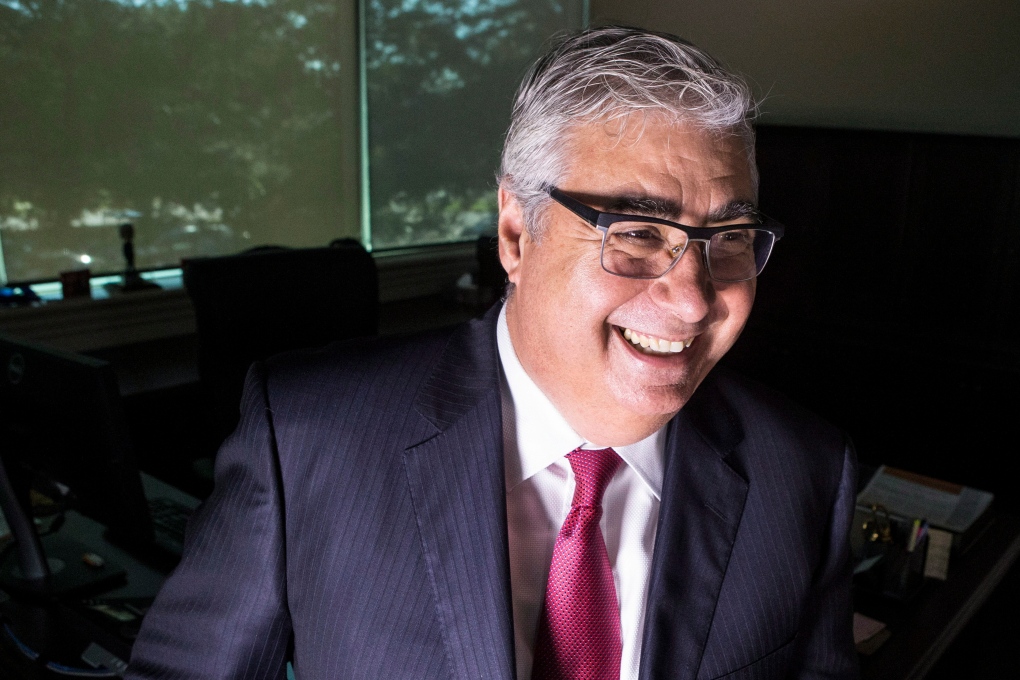 Marc Caira, Tim Hortons’ new CEO, poses for a picture in one of the company's coffee shops in Oakville, Ontario on Monday September 16, 2013. (Chris Young / THE CANADIAN PRESS)

OAKVILLE, Ont. -- Everything from coffee cup sizes to doughnut selection is under the microscope at Tim Hortons (TSX:THI) as the company's new chief executive settles into his role and begins a widespread review of the chain's operations.

Marc Caira is looking for ways to boost the reputation of the already iconic company, and he wants to improve how customers feel about their experience at the counter, which he calls "the moment of truth" for any quick service restaurant.

"If you make a mistake there, then you're impacting the consumer, and today's new reality is you can't afford to do that," he said in a recent interview at the company's headquarters in Oakville, Ont.

"You cannot give consumers permission to go somewhere else."

Before he joined Tim Hortons, Caira held various executive roles at Nestle's global operations where he helped expand the company's hot and cold beverage division. He says his experience with Nestle means he comes to Tim Hortons with an open mind and thinking like a customer.

"The beauty of my role is that I can ask as many questions as I want," he said.

Hardly two and half months into his tenure at the Canadian chain, Caira is still learning how Tim Hortons operates. So far, he has travelled to more than 20 cities across the country to talk with franchisees, and he's been catching up on how the 49-year-old company has evolved.

His office smells of a fresh coat of paint and new leather chairs, and hints of his roots at Nestle are scattered around the room. A collection of KitKat chocolate bars behind his desk are branded with his image, a personalized option for the Japanese market.

In his new role, that type of creative quirk could come in handy. Tim Hortons has faced an onslaught of competition from coffee chains like Starbucks and fast food restaurants like McDonalds, who have offered deep discounts to their customers along with loyalty programs.

Overall same-store sales, a retail industry barometer, have improved somewhat, rising 1.5 per cent in the second quarter. Yet the numbers suggest that fewer customers are coming through the doors and overall they're spending less money. Tim Hortons does not provide specific traffic data.

A study from the NPD research group found that Tim Hortons' share of the $4.6-billion coffee chain market fell to about 76 per cent in May, a decline of about two per cent from 2009 before McDonalds launched its McCafes.

At least part of the difficult market can be attributed to slower economic growth and reduced spending by many Canadians in a fickle market. Caira wants to ensure that customers don't walk out of his stores baffled by a complicated menu or feel like they've waited in line too long.

While nothing has been decided yet, changes will likely involve simplifying the company's menu, which at this point includes a rotating selection of more than 60 types of doughnuts, and no less than five different coffee cup sizes.

At a conference held by Scotiabank on Tuesday, the 59-year-old executive told analysts that Tim Hortons needs to ensure its menu defines the company, rather then reflects the same products offered by its competitors.

"Everybody sells smoothies," he said, singling out one of the more recent additions to the Tim Hortons menu.

"You walk into a number of any restaurants you want, look at the menu, they look familiar."

Numerous other options are being considered as well, including an expansion of Tim Hortons products into vending machines and agreements with new partners to take its brand outside of the restaurant.

Already the company is trying to speed up the process at its counters, including double-lane drive-thrus and beverage express counters that shuffle customers away from the cash register while they wait for their drink to be prepared.

While Caira wants to be different, he knows that sometimes traditional mainstays are what work best. His favourite doughnut is the Boston Cream, which he enjoys with an iced cappuccino.

Tim Hortons needs to consider launching innovative platforms it can build on, rather than just new products, he said. Hot lunches have been a popular focus for the company over the past year, and soon it could expand into more options angled at dinner-hour customers.

"The panini started out as a platform for lunch, we can easily take it into breakfast," he said.

And while Caira hasn't made any specific decisions for changes to the menu or the company's operations as a whole, he plans to unveil a new strategic plan before the end of the year.

Activist investors have been pushing for the company to make major changes to its U.S. expansion plans and boost its leverage to buy back more shares. Caira has already responded to some of the demands from Scout Capital Management LLC and Highfields Capital Management LP, though he says he won't necessarily react to all of their suggestions.

"We will listen and engage, but there are times where we will agree to disagree," he said, pointing to suggestions that Tim Hortons should exit the supply chain as one area where he won't budge.

"I don't agree with that at all," he said. "That's part of our business model, so we need to protect that."

Edward Jones analyst Bobby Hagedorn said he is confident that Tim Hortons has a strong enough reputation in Canada to overcome any short-term economic challenges or attempts by other companies to trample its market share.

"Despite what we would consider a very tough operating environment, we do think these guys have the locations, customer loyalty and the brand that allows them to succeed in that environment," he said in a phone interview from St. Louis.

"People are going after their core breakfast segment, so we do think the company needs to get back on track. We do think they're going to be able to do that."