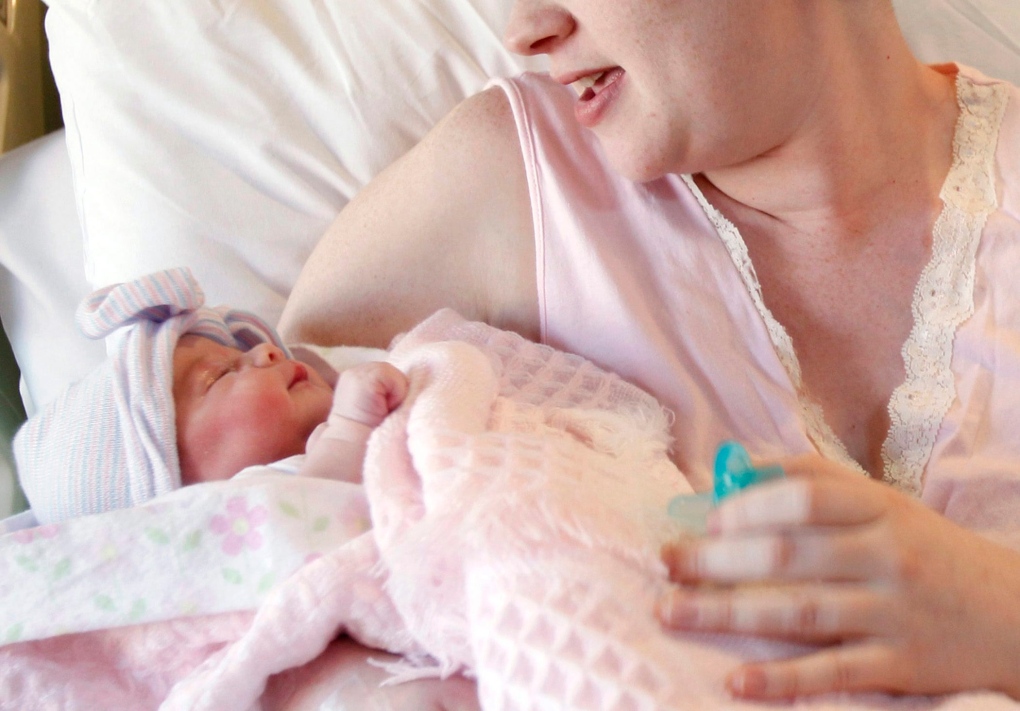 A mother holds her newborn baby at a hospital in Corpus Christi, Texas in this Nov. 11, 2011, file photo. (Michael Zamora / Corpus Christi Caller-Times via AP)

OTTAWA -- A new study from Statistics Canada suggests that new mothers who become self-employed after having children are able to better manage their weekly hours of work, giving them a better work-family balance.

The study released Friday finds that women who work full- or part-time jobs when they don't have children for the most part work 40 hours a week, but that clustering effect fades with new mothers who take the leap into self-employment.

Instead, the study finds an even distribution of work hours, meaning roughly the same percentage of new mothers work 10, 20, 30 and 40 hours a week, suggesting they tailor their hours to the family's child-care needs.

The study is the first of its kind in Canada to mine empirical research -- in this case results from the 2006 mandatory long-form census and the 2011 voluntary national household survey -- for insights into the work choices new mothers make.

The statistics office may be able to go even deeper into the data once the results of the 2016 census are in to see how career choices change for mothers as their young children age and what decisions fathers make in the race for more work-life balance.

"It's a very complex issue. We only scratched the surface of it," said Yuri Ostrovsky, a senior research analyst at Statistics Canada who co-authored the study.

The study comes as the federal government is looking at measures aimed at new parents, including extending parental leave to 18 months, although without an increase in benefits.

The Liberals have also promised to bring in legislation to give about 883,000 federally regulated workers the ability to request a change to where they work or their schedule, or to seek time off to deal with a personal situation. The proposal wouldn't force their employers to agree to each request.

A discussion paper the government posted online over the summer as part of consultations on the proposal pointed to millennials -- the largest generation in the Canadian workforce -- as increasingly demanding more flexibility over when, where and how they perform their jobs.

The Statistics Canada study should add to the government's evidence base.

Of the more than 500,000 Canadian women sampled in the study, the researchers identified women who didn't have children in 2006, but did have them in 2011, to see changes to their work hours and earnings, as well as whether they left hourly wage work in favour of self-employment

The study found that new mothers were more likely to become self-employed than other women who work in full-time or part-time jobs. Data show that the probability of new mothers making the jump to self-employment is 1.2 percentage points higher than other working women, which the researchers say is a statistically significant difference.

Still, the percentage of women in the study sample who made the leap was small: 5.3 per cent of new mothers, versus 4.1 per cent for other women.