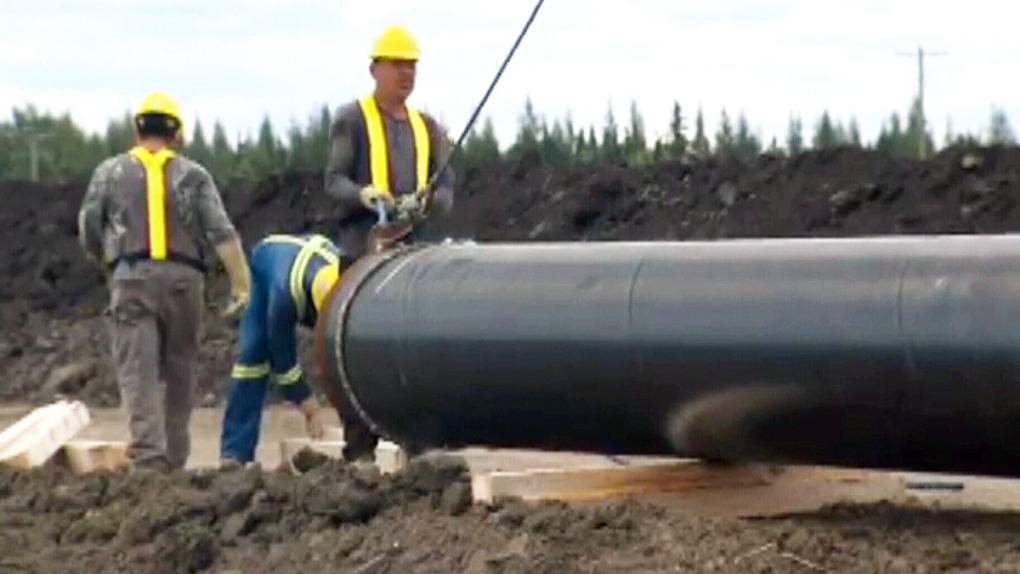 The National Energy Board has approved energy giant Enbridge's plan to reverse the flow and increase the capacity of the controversial Line 9 oil pipeline.

The federal watchdog has granted Enbridge (TSX:ENB) "leave to open" its Line 9B pipeline between southern Ontario and Quebec, but it won't allow the line to start operating until the board is sure it's safe.

The NEB said Thursday that it will require Enbridge to do hydrostatic testing along three densely populated segments -- near Hilton, Ont.; Kingston and Brockville, Ont., and Mirabel, Que.

The tests involve filling the pipe with water at much higher than its usual operating pressure to ensure the pipe is strong enough and won't burst.

The results must be provided to and approved by the NEB.

It's the latest delay for a pipeline Enbridge had been aiming to start up last fall.

The original Line 9 has been in the ground for around four decades, but Enbridge has reconfigured it to ship greater volumes and flow crude eastward rather than westward. That way, Quebec refineries can have access to domestic crude, rather than having to rely on imports.

"But given the fact that this pipeline is situated in a urban area and that if there would be a leak, it would be affecting lots of people, we wanted to have an additional degree of confidence," she said.

Mercier said she doesn't know how long it will take to do the tests, but "it might be a question of a few days to a few weeks."

The NEB has also imposed more conditions on the project once it starts up, such as biweekly ground patrols and quarterly integrity testing during the first two years of operation.

Enbridge is figuring out its next steps, said spokesman Graham White.

"Enbridge is reviewing this and the other conditions outlined in the decision to determine what is required for compliance, scope of work and timelines," he said in an emailed statement.

"Although conditions must be met before the pipeline can be operated, the granting of the Leave to Open is an acknowledgment of the thorough, detailed engineering analysis and real actions on safety and integrity that Enbridge has invested in this project over the past three years. We are confident that Line 9 can be operated safely and we will fulfil the regulator's conditions."

Last October, as work on the pipeline was wrapping up, the regulator raised concerns about the placement of shut-off valves in relation to water crossings. In February, the board said it was satisfied with Enbridge's approach and the company applied for permission to start up the pipeline.

Two Quebec refiners eager to have western crude shipped their way -- Suncor (TSX:SU) and Valero -- have recently written to the NEB asking why the line has not yet been allowed to start up.

Mercier said she understands the frustration, but the board won't compromise when it comes to safety.

"We take the time that's necessary to do the proper analysis, ask the good questions and get the result that we want before we allow the pipeline to go on."