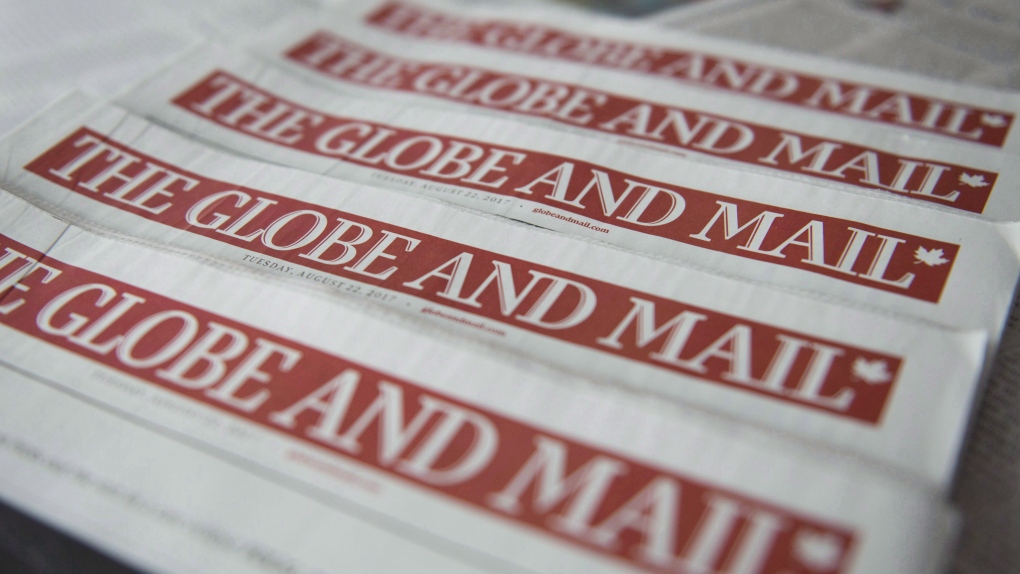 Copies of the Globe and Mail newspaper are shown in Toronto on Tuesday, Aug.22, 2017. (Graeme Roy/THE CANADIAN PRESS)

CALGARY -- The Globe and Mail will roll out a redesigned newspaper with fewer, bigger sections starting Friday that will be printed on narrower paper to make handling easier for readers and save money on newsprint costs.

The Toronto-based company will save about $1 million per year on newsprint as it cuts the width of its printed product to 10 inches (25.4 centimetres) from the current 11 inches (28 centimetres), said publisher and CEO Phillip Crawley on Wednesday. He said the company spent $8.2 million on newsprint in its last fiscal year -- the savings therefore amount to about 12 per cent.

"It's a narrower width. We have done this once before and the readers liked it. They felt it was handier," said Crawley, referring to a similar slimming of the newspaper from 12 inches seven years ago.

"Obviously, that requires a redesign."

The redesign includes moving B.C. content, which had its own daily section front in British Columbia editions, into the A-section of the newspaper, Crawley said, adding there will be just as much room for the articles.

Fewer bigger sections will save printing costs for the Globe and allow it to extend its final printing deadlines to allow more late-breaking news to make it into the newspaper, he said.

In August, the Globe announced plans to stop its Atlantic Canada daily print edition, saying it was losing $1 million each year to deliver about 5,000 copies of the paper each day.

The revamp comes at a tumultuous time for newspapers.

On Monday, Postmedia (TSX:PNC.A, TSX:PNC.B) and Torstar (TSX:TS.B) announced they will trade 42 newspaper titles, mainly Ontario community newspapers, and close most of them, citing a lack of advertising revenue. The deal is being examined by the Competition Bureau.

A spokesman for Torstar declined comment Wednesday on whether its Toronto Star newspaper is considering using a narrower format. Postmedia did not immediately respond to the same question about its major daily newspapers.

Crawley said the Globe hopes its redesign will allow it to grab a bigger piece of the shrinking Canadian print advertising pie, but he said pleasing readers is just as important.

"We make more money from subscription revenue than we make from advertising revenue ... We passed that point earlier this year," he said.

"Subscription revenue is growing and that's our main aim, (that) the redesign will stimulate further reader interest in reading the content."

The Globe's redesign includes putting Monday to Thursday content in two sections instead of four, although Crawley says the amount of space for news stories will remain the same.

The weekday Globe will feature an A-section combining News and Life and Arts. The B-section offers Report on Business, Globe Investor and Sports. A new national real estate section is to appear on Friday and the Drive section will move from Thursday to Friday.

On Saturday, readers will see a six-section Weekend Globe, which is to include regional pages for B.C., Toronto, Alberta and Montreal. Report on Business, Sports and Arts are to continue as stand-alone sections.

"Sophi analyzes not only what kind of traffic it's attracting but it also analyzes how many subscribers it converts," he said.

"We know on a particular day which stories are drawing subscriber engagement, where people are saying, 'OK, I want to read that, I will pay for it, I will go behind the pay wall and buy a subscription."'

A subsidiary of the Globe and Mail and the Toronto Star's owner Torstar holds investments in The Canadian Press as part of a joint agreement with the parent company of Montreal's La Presse.