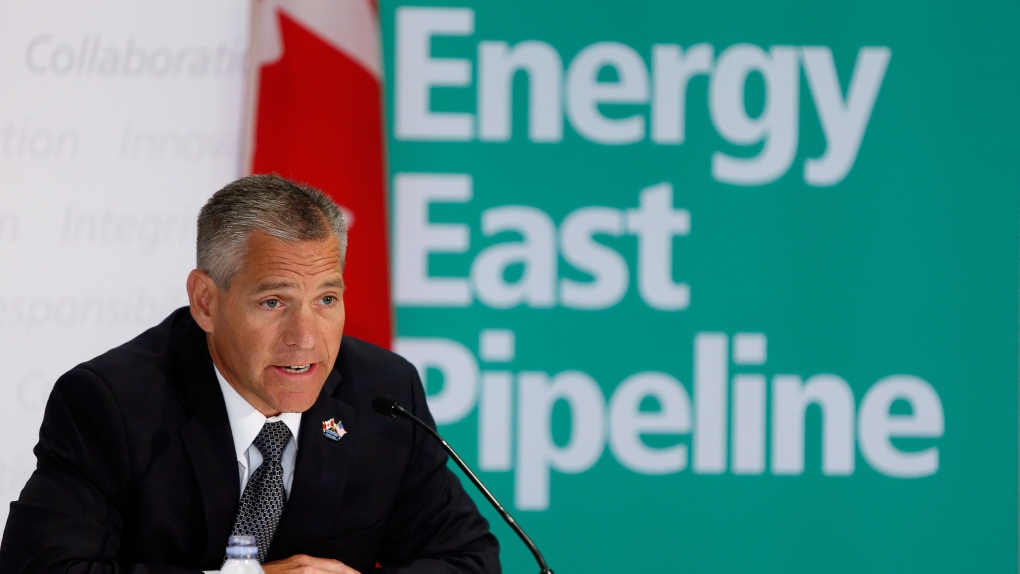 SAINT JOHN, N.B. -- Mi'kmaq communities in New Brunswick said Wednesday the Energy East pipeline project must have their consent in order to pass through their territories.

Chief George Ginnish, of the Eel Ground First Nation, told National Energy Board hearings in Saint John, N.B., on Wednesday that Mi'kmaq communities remain "deeply concerned" about the effect the proposed pipeline will have on their aboriginal and treaty rights.

Ginnish was speaking on behalf of a group of nine communities in eastern and northern parts of the province.

"We have to consider the impact that any projects will have on our next seven generations, it's our duty to our ancestors," said Ginnish.

He told the three member panel the Mi'kmaq are concerned about the impacts of the pipeline's construction and the effects of potential oil spills on watersheds and watercrossings as well as on traditional fisheries and on species such as Atlantic salmon.

He said there are also concerns about increased tanker traffic in the Bay of Fundy. The tankers would be used to export crude oil from Western Canada that would be stored at a proposed marine terminal in Saint John.

"Unless all of these concerns can be meaningfully addressed, we cannot and will not consent to the pipeline in our territory," Ginnish said.

The chief said that through a series of peace and friendship treaties with the Crown the Mik'maq have never surrendered their aboriginal title to their lands.

"The Energy East pipeline will cross through our Mi'kmaq traditional lands . . . thus the project will require our consent," said Ginnish.

Bruce McIvor, a solicitor for the Elsipogtog First Nation near Rexton, N.B., said the energy board's mandate is limited in relation to the project because of the band's treaty rights. He said Elsipogtog expects a direct relationship with the Crown in dealing with its pipeline concerns.

"The board . . . cannot fulfil completely the Crown's obligations and we think it's important that's reflected ultimately in the board's report," MacIvor said.

Officials with Energy East said they are committed to ongoing consultations with First Nations groups in order to address their concerns.

Christian Matossian, manager of indigenous relations for the Energy East pipeline, said the company respects the legal and constitutional rights of aboriginal communities.

He said the company is operating under current Canadian law with respect to its engagement with aboriginal people.

"Energy East will strive to reach consent with First Nations and also seek to avoid and mitigate any potential effects that the project has on the community," said Matossian.

The three day hearing was scheduled to wrap up later Wednesday.

Hearings will be held in nine other cities and are set to conclude in Kingston, Ont., in December.

By Keith Doucette in Halifax