TORONTO -- As the coronavirus pandemic brings global air travel to a near standstill, airlines around the world are facing some tough questions about how long their planes will be parked and what a longer term interruption to air travel could mean for the industry as a whole.

As of Tuesday, on the heels of months of border closures and travel bans due to COVID-19 outbreaks, there were 12,350 passenger planes in service around the world, according to figures gathered by Cirium, a data and analytics firm that specializes in the travel industry. That’s less than half the approximately 30,000 commercial aircraft that Cirium says would typically be crisscrossing the skies.

The airline industry as a whole may have entered the COVID-19 crisis in relatively good financial shape, points out George Dimitroff, the head of valuations at Ascend by Cirium, the consultancy arm of the company. “Globally speaking, the industry has had a decade of uninterrupted profitability,” Dimitroff told CTVNews.ca on the phone from New York City on Tuesday. “Airlines have accumulated cash reserves, they’ve got aircraft on their books that are fully owned,” he added. But Dimitroff isn’t denying the unprecedented situation carriers are finding themselves in, and how no one could have fully prepared for the present moment.

PARKED PLANES: WHERE ARE THEY AND WHAT HAPPENS TO THEM?

Grounding a multimillion-dollar plane isn’t as simple as parking a car in a garage and walking away. In short-term storage situations, which Dimitroff says typically last a month, a parked plane would require engine and hydraulic system checks, tests to the aircraft’s electrical and flap systems, and tire rotations. “Aircraft are not designed to sit on the ground. Their condition actually deteriorates that way,” Dimitroff said. He also said planes in short-term storage are still flown occasionally so they’re not sitting idle the entire time.

For example, WestJet was forced to ground more than 130 aircraft from its fleet to respond to virus-related travel restrictions, and was able to do so in under a week, company spokesperson Morgan Bell said in an email to CTVNews.ca. “Keeping the aircraft in warm storage treats the plane as if it is flying even though it’s not, meaning that regular maintenance intervals such as daily and weekly checks are performed on a schedule,” Bell wrote. In an email, Air Canada said it had no one available to speak on the issue when CTVNews.ca asked for the same information. 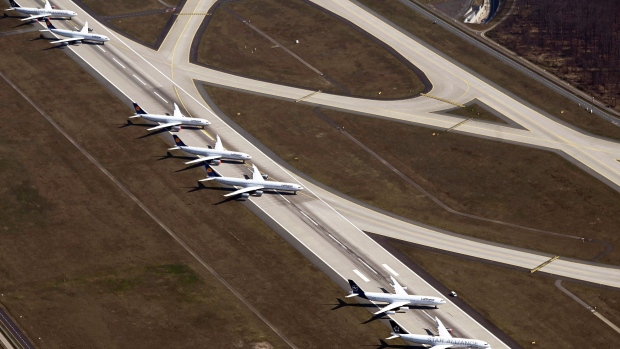 Commercial jets placed in long-term storage will also undergo these types of periodic check ups. But the longer a plane sits idle, the higher the chance more high-level maintenance or repair work is needed to keep the aircraft functional and flight-ready. Dimitroff says the aircraft’s age is also weighed as a factor in an airline’s decision to return it to service or retire it. 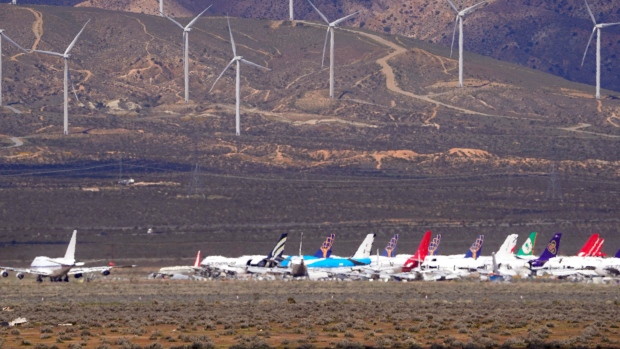 A “C-check,” as it’s called in the industry, is an extensive inspection and thorough set of maintenance system checks performed on an aircraft to determine its functionality and airworthiness. The frequency of C-checks can vary depending on how many flight hours a plane has racked up as well as the carrier’s operational guidelines. Depending on the type of aircraft, Dimitroff estimates the cost of a C-check inspection can run anywhere from $150,000 for a narrow-body aircraft to upwards of $300,000 for a wide-body jet.

In WestJet’s case, Bell said it takes about 60 man hours a week per aircraft to conduct the required maintenance. Multiply that process by the 17,271 aircraft that are currently parked on fields, airport tarmacs and in hangars around the world and it becomes clear how complex and costly itcan become for airlines over time. 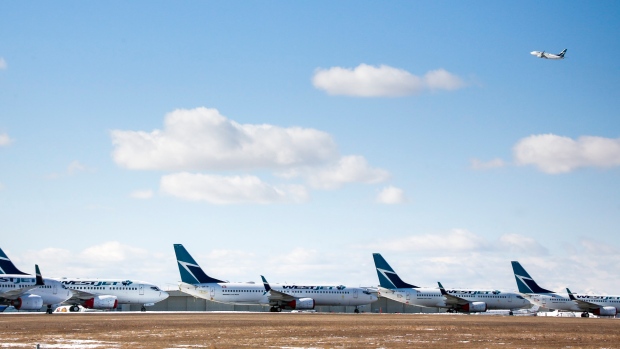 The largest groupings of parked commercial planes waiting out the pandemic can be found in the U.S., at airports and storage locations in New Mexico, Arizona, and California, according to Cirium’s data. It’s also no coincidence these parking locations are all found in warm and arid places; the kinds of conditions considered ideal for storing sophisticated pieces of technological machinery for long periods of time without exposing them to potentially damaging elements like humidity and cold.

Bell says the bulk of WestJet’s grounded fleet is sitting in chock blocks at airports in Calgary, Toronto, Vancouver and Edmonton. That matches the storage location data collected by Cirium, which suggests there are more than 550 airplanes currently parked at Canadian airports from coast-to-coast-to-coast.

While some countries around the world, including Canada, are slowly beginning to reopen their economies, it’s still unclear when travel bans and border restrictions willbe lifted or what the resumption of commercial air travel will look like. Faced with a global health crisis that has no clear end date, Dimitroff says many airlines are hesitant to make any long-term decisions that could significantly impact the future of their fleet, like deciding to convert their aircraft into freighter or cargo planes, or retiring an aircraft early. “Airlines are in wait-and-see mode right now, and are making long-term storage decisions as they need,” said Dimitroff. “They’ve already got a timeline of new aircraft deliveries and they’re trying to line that up with recovery.”

Some of the industry’s biggest players, including Air Canada, American Airlines, Delta, KLM and Lufthansa, have already made the decision to retire some of the oldest planes in their respective fleets in an effort to mitigate the long-term financial impacts of the coronavirus on their bottom lines.

The form and timing of any recovery in an industry that has lost billions of dollars due to the pandemic are hard to predict, but Dimitroff says the early signals aren’t promising. “By expert estimates, the most pessimistic scenario for a recovery to 2019 [air traffic] levels will happen by 2026,” Dimitroff said. “The more realistic best-case scenario is seeing 2019 levels in 2022,” he added. Dimitroff’s musings are in line with what other North American industry insiders are also saying; that a full recovery for air travel to pre-pandemic levels will take years to do. 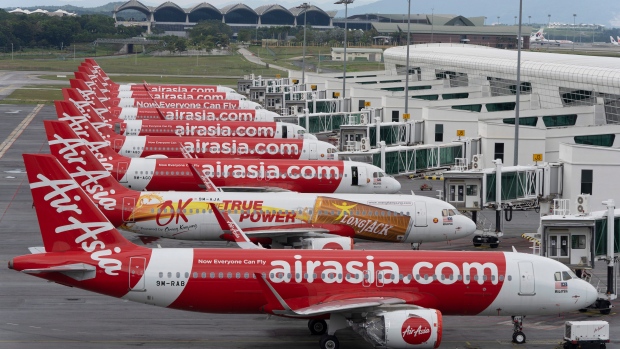 Dimitroff also pointed out that how the global economy bodes as the pandemic subsides will largely dictate how the airline industry recovers. It’s believed the financial losses incurred as a result of COVID-19 will surpass the $7 billion the global airline industry lost in the wake of the 2003 SARS epidemic.

While international travel is still at a virtual standstill, Dimitroff believes there’s a chance domestic travel could make a bit of rebound in the coming months. He says industry analysts will be keeping a close eye on the next few months to see if they can get a better sense of how the rest of 2020 will play out. “The industry has hit a floor,” Dimitroff said. “If summer recovery is weak, it’s not going to trend well for the winter,” he added.