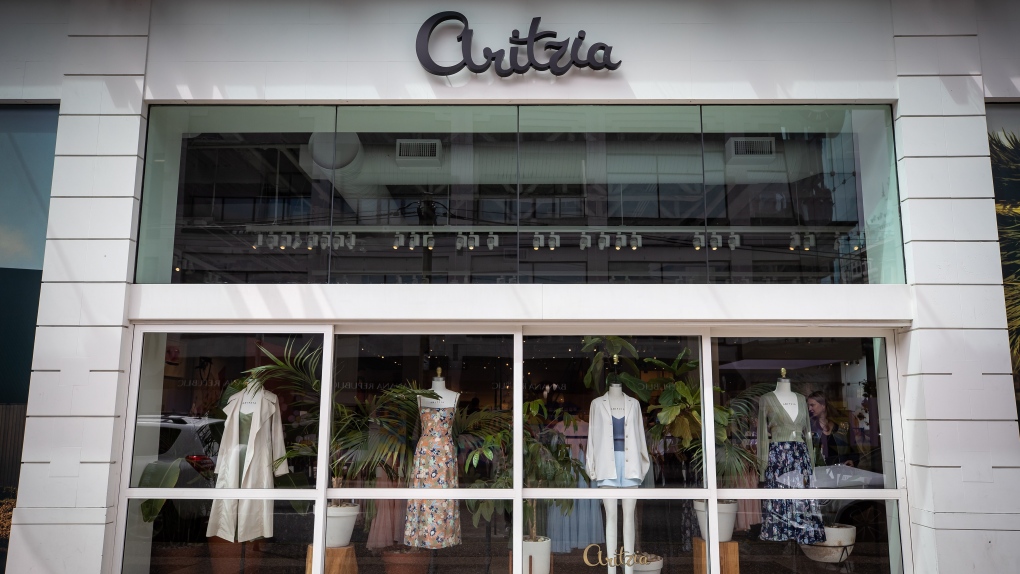 A woman shops at an Artizia clothing store on its first weekend open after a lengthy closure due to COVID-19, in Vancouver on May 17, 2020. THE CANADIAN PRESS/Darryl Dyck

Nobody can predict exactly how COVID-19 will reshape our lives in the years to come, but experienced observers of the retail sector say shopping will never be quite the same again.

With physical distancing rules in effect and an explosion in the number of digital orders, shopping habits across all demographics have changed dramatically in a matter of weeks, and opened the doors to widespread adoption of new technologies, suggest two industry watchers from KPMG, a global advisory firm.

"Consumers will need to start getting comfortable with a new way of buying," suggested Katie Bolla, a partner of KPMG's consumer and digital operations in Canada.

"A lot of the trends we are witnessing now were beginning to happen prior to the pandemic -- it's just that the pandemic has accelerated them."

Looking toward the future, Bolla and her colleague Kostya Polyakov, KPMG's national leader of consumer and retail, discussed some of their retail predictions with The Canadian Press.

CP: We've heard a lot about the uncertainty that's gripping Canadian retailers as they consider reopening their stores, but can we look elsewhere for insight into how getting back to "normal" might play out, and what it could mean for their survival?

Polyakov: In this whole COVID world, we have a bit of a time machine in China, right? China is like two months ahead of us and so we are able to see things that may be an indication of what happens for us. I speak with my retail counterparts there quite often and they've seen, in the initial stages of reopening, retail revenue gets to about 30 per cent of what it would've been pre-COVID, on average, as people are hesitant to go (back to stores). It then goes up to about 60 per cent in the first two months. Current forecasts show they're going to get to about 80 or 90 per cent of what their revenue would have been in the past, so no one is back to historical sales levels.

CP: We've seen a number of major retailers anticipate that slowdown, in part, by deciding to shutter underperforming locations in recent weeks. Victoria's Secret and Henry's recently announced closures, while Aldo and Reitmans filed for creditor protection, which suggests they'll close locations too. Is this a sign of a broader move to eliminate their physical retail presence in some communities?

Bolla: In general, many retailers are taking a more analytical approach to their retail footprint. They're starting to weave together operational data, as well as postal code and customer data, to better understand the needs of a community. Is it through e-commerce? A physical store location? So they're marrying all of those dimensions to get a better perspective on where to put the (storefront) boxes and appropriately fill the boxes with the right merchandise mix.

Polyakov: This whole pandemic, in my opinion, brought an entirely new generation of shoppers online. Baby Boomers have not been huge online shoppers, not like some of the younger folks, but this has brought them into the online world.

CP: I suppose there aren't that many steps between teaching an older demographic how to FaceTime on their smartphone, and those same people being comfortable with buying products online that ship to their homes. Do you expect those digital habits to play a bigger role in the physical store culture too?

Polyakov: You're going to see a huge acceleration in how much technology is used as an alternative to playing with the product. One really good example is Mountain Equipment Co-op where they use augmented reality to project a (camping) tent onto the floor. You're not touching it, but you're getting a good feel for how big it is, and if it's going to suit your needs.

CP: Fashion retailers are running against the digital footprint too, but many shoppers are still reluctant to buy online not knowing if the clothes will fit. But at the same time, there's questions about how customers will try on clothes without risk of spreading the virus. Could augmented reality address that concern?

Bolla: Some retailers are already experimenting with the ability to try on clothes through a mirror that gives the appearance of what the clothes might look like on your body. It's been more of a pilot for a couple of years, but they might develop that technology more.

Polyakov: And we're going to see stores being converted to showrooms, which was an emerging trend before but it's certainly accelerated now. There's no real inventory, and they don't need as much space, but they display product that you're ultimately just going to go and buy online anyway. That is a different business model that has a lower cost, and is a little bit easier to execute.

CP: If we're talking about potential contact points, obviously the face-to-face conversations have traditionally played out at the check-out counter. We've seen grocers install Plexiglas at the registers as way to create a distance with staff, but is that a solution for other retailers too?

Polyakov: Think about (department stores) or any book store, you're pretty close to the cashier. More than likely, we're going to see a lot more self checkouts. From a brand perspective, the digital screen looks cooler to a customer than a person behind Plexiglas. It has a pleasantness to it.

'This is not business as usual': You may start seeing a COVID-19 surcharge on your receipts

The toll COVID-19 is taking on Canada's homeless

Kids at home for another three months? Here are some ways to cope

Hand sanitizer can ignite if left in a hot vehicle: Alberta doctors

Air Canada offers vouchers with no expiry for cancelled flights