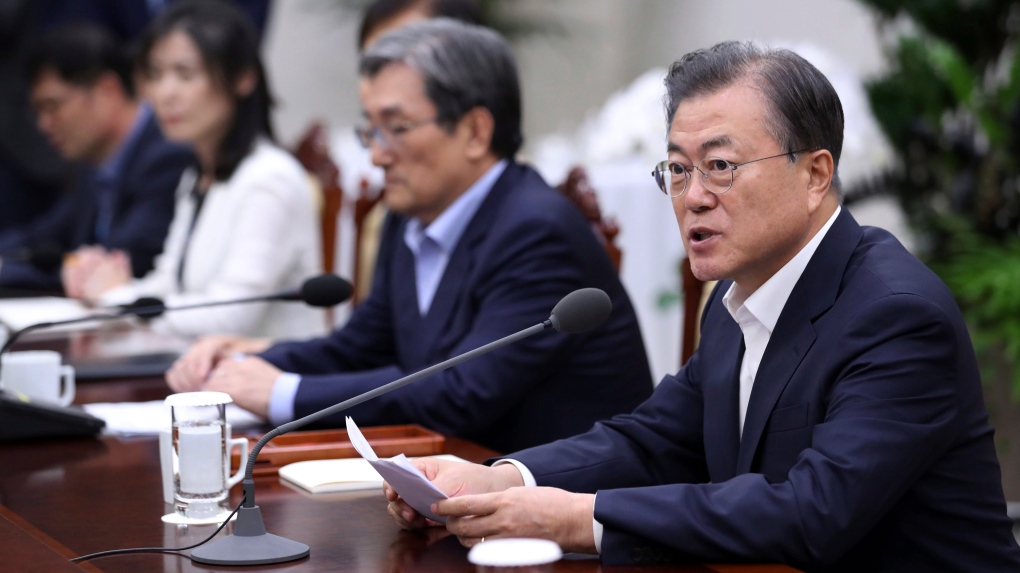 SEOUL, Korea, Republic Of -- South Korea's president on Monday described the country's escalating trade war with Japan as a wake-up call to revamp its economy and issued a nationalistic call for economic co-operation with North Korea, which he said would allow the Koreas to erase Japan's economic superiority in "one burst."

President Moon Jae-in made the comments in a meeting with senior aides to discuss Japan's imposition of trade curbs on South Korea. They came as a surprise since North Korea has raised tensions in recent weeks with tests of new short-range weapons that pose a threat to South Korea's security.

"The advantage Japan's economy has over us is the size of its (overall) economy and domestic market. If the South and North could create a peace economy through economic co-operation, we can catch up with Japan's superiority in one burst," Moon said in the meeting at Seoul's presidential Blue House.

"Japan absolutely cannot prevent our economy from taking a leap. Rather, (Japan) will serve as a stimulant that strengthens our determination to become an economic power," he said.

Moon's claim that South Korea could overcome the trade dispute with Japan, the world's third-largest economy, by co-operating with North Korea, a desperately poor nation currently under crippling U.N. sanctions, shows that he is running out of ideas for seeking leverage against Japan, which for decades has maintained a huge trade surplus with South Korea, some analysts said.

Even if economic co-operation between the Koreas fully resumes after quick progress in nuclear diplomacy -- which looks increasingly unlikely -- rebuilding the North's economy following decades of isolation and policy blunders could be a long and excruciating process.

"After refusing to issue a single warning over North Korea's blunt provocations targeting (South Korea), why is the president talking about inter-Korean economic co-operation now?," Lee said. "A peace economy -- where peaceful relations drive economic growth -- only sounds good, and it's not clear what it is and how things will be actually done."

Moon has described Japan's moves to downgrade South Korea's trade status and tighten controls on exports to South Korean manufacturers as a deliberate attempt to damage his country's export-dependent economy. He has accused Tokyo of weaponizing trade to retaliate over political disputes surrounding the countries' bitter wartime history.

Tokyo says its measures are based on national security concerns and, without providing specific evidence, has questioned the credibility of South Korea's export controls on sensitive products. Japanese officials have also claimed that South Korea could not be trusted to faithfully implement sanctions against North Korea and suggested that the South may have allowed sensitive materials to reach the North.

North Korea and Japan didn't immediately respond to Moon's comments. The North has been demanding that Seoul turn away from Washington and restart inter-Korean economic projects held back by U.S.-led sanctions against the North. The U.S. has said the sanctions should stay in place until the North takes concrete steps to relinquish its nuclear weapons and ballistic missiles.

The North has significantly reduced its diplomatic activity with the South amid a stalemate in the larger nuclear negotiations with the U.S. It has been ramping up its weapons tests, including two test firings of what it described as a new rocket artillery system last week, while expressing frustration over the slow pace of diplomacy and the continuance of U.S.-South Korea military drills that it sees as an invasion rehearsal.

Choi Kang, a senior analyst at Seoul's Asan Institute for Policy Studies, said Moon's comments could create friction with Washington and also send a wrong message to North Korea, which may think that its brinkmanship is working and push further to increase pressure on Seoul.

He said Moon's comments are "a confession that Seoul doesn't have many cards in its hands."

He said it was unclear whether Moon's suggestion that he could create a breakthrough in the trade row with Japan through inter-Korean relations was realistic.

Choi also said Moon's words would strengthen views that the trade dispute between South Korea and Japan may signal a larger geopolitical divergence between the U.S. allies over North Korea and other security issues. He said that may complicate Washington's efforts to maintain co-operation to deal with the North's nuclear threat and counter the regional influence of China.

Moon met with North Korean leader Kim Jong Un three times last year and they agreed to resume economic co-operation when possible, voicing optimism that international sanctions could end to allow such activity. But the inter-Korean peace process has halted since the collapse of a nuclear summit between Kim and U.S. President Donald Trump in February over disagreements over exchanging sanctions relief and disarmament.

Earlier on Monday, South Korea said it plans to spend 7.8 trillion won ($6.5 billion) over the next seven years to develop technologies for industrial materials and parts as it moves to reduce its dependence on imports. The government will also financially support South Korean companies in mergers and acquisitions of foreign companies and expand tax benefits to lure more international investment, while easing labour and environmental regulations so that local companies can boost production, the country's trade ministry said.

South Korea's plans are aimed at stabilizing the supply of 100 key materials and parts in semiconductors, display screens, automobiles and other major export sectors, where its companies have heavily relied on Japanese imports to produce finished products.

On Friday, Japan's Cabinet approved the removal of South Korea from a list of countries with preferential trade status, which would require Japanese companies to apply for case-by-case approvals for exports to South Korea of hundreds of items deemed sensitive.

The decision followed a July measure to strengthen controls on certain technology exports to South Korean companies that rely on Japanese materials to produce computer chips and displays used in smartphones and TVs, which are key South Korean export products.

South Korean officials have vowed retaliation, including taking Japan off its own "whitelist" of nations receiving preferential treatment in trade. Moon's office said it will also consider ending its military intelligence-sharing pact with Japan as part of its countermeasures, saying it could be difficult to share sensitive information considering the deterioration of trust between the countries.