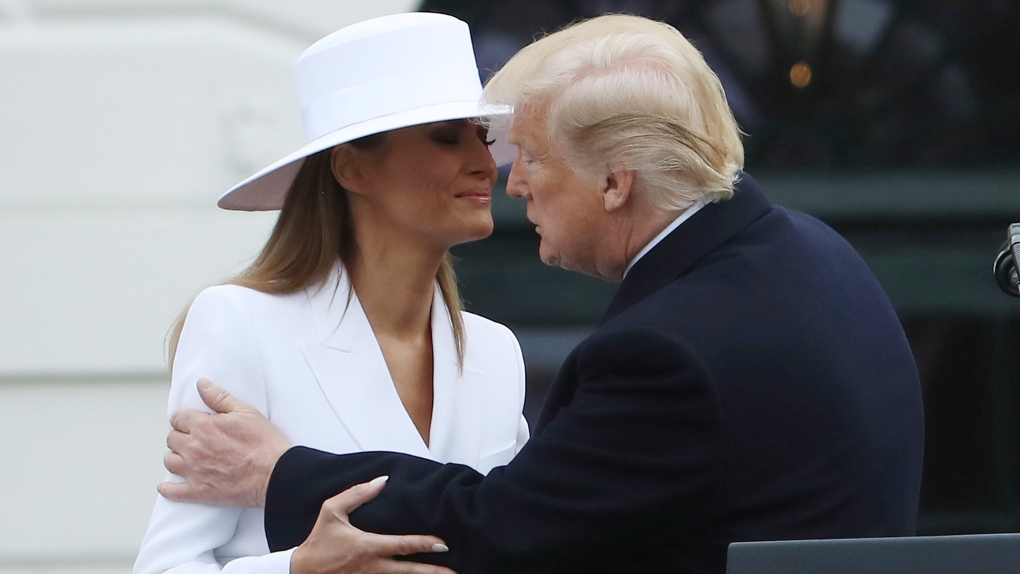 Melania Trump announced Tuesday morning that she is holding an auction of the white hat she wore during the visit of the French first family, the Macrons, to the White House in 2018. (Mark Wilson/Getty Images via CNN)

Melania Trump announced Tuesday morning that she is holding an auction of the white hat she wore during the visit of the French first family, the Macrons, to the White House in 2018.

In a statement from her office, Trump said that, in addition to the hat, the auction lot will include a watercolor by Marc-Antoine Coulon -- a French artist who drew her eyes for her NFT last month -- as well as what the statement defines as "an exclusive digital artwork NFT with motion." The NFT, the second Trump has sold in less than a month, features the drawing of the hat with some animation.

Trump's office says some of the proceeds will go toward an initiative that is a part of the former first lady's Be Best program, but it's not clear how much will be donated.

The centerpiece of the auction, the custom white hat, which Trump has signed, was created for Trump by her personal stylist, Hervé Pierre, to match the US$2,105 white crepe Michael Kors Collection suit Trump wore for the daytime ceremonies at the White House attended by Emmanuel Macron and Brigitte Macron.

The visit by the French President and his wife was the Trump administration's first official state visit from a foreign leader, and it came in April 2018, a handful of weeks after scandalous headlines about the former President's alleged extramarital affairs. Melania Trump's appearance in the hat for the French visit was closely watched by the media, as it was one of the first times she had appeared with her husband following the news about her marriage. CNN has also reached out to Pierre for comment on the auction.

The three items will have an opening bid of US$250,000, and bidding will only be accepted via SOL, a form of cryptocurrency.

Trump's delving into the world of NFTs and cryptocurrency is not a traditional avenue for former first ladies, many of whom write memoirs or continue charitable work outside of the White House.

Many first ladies donate significant items of clothing or other personal items associated with historic moments of an administration to the presidential library associated with their husbands for display, or to other museum-level institutions or organizations. What a first lady wore for certain official occasions, such as a state visit like the one from the French first family to which Melania Trump donned the hat, become part of an administration's account of history and are considered tangible assets to a period of American politics. For example, several items of Jacqueline Kennedy's wardrobe as first lady are part of an exhibition within the John F. Kennedy Presidential Library & Museum.

Donald Trump has yet to announce his intent for presidential library plans. Questions to Melania Trump from CNN about the thought process behind her NFT sales have gone unanswered.

On December 16, Trump announced her first NFT, a limited release which closed December 31 that consisted of a watercolor drawing of her eyes by Coulon for sale for US$150. CNN has reached out to Trump's office for clarity on the number of NFTs sold and the profits, as well as what portion would go to support foster children, which Trump's statements have indicated will be the case. The last paragraph of Trump's latest announcement about the three auction items on her personal website includes the line: "A portion of the proceeds derived from this auction will provide foster care children with access to computer science and technology education. "

CNN has sought clarity numerous times from Trump's spokesperson about the "portion of the proceeds" the statement says will be donated to "Fostering the Future," which is described as a "Be Best Initiative." The statement about the auction says Trump will "grant the opening round of scholarships to recipients during the first quarter of 2022," though details about the scholarships were not included.

A preview of the items on Trump's website began Tuesday, with bidding on the lot, entitled "The Head of State Collection," set to open January 11 and run through January 25.