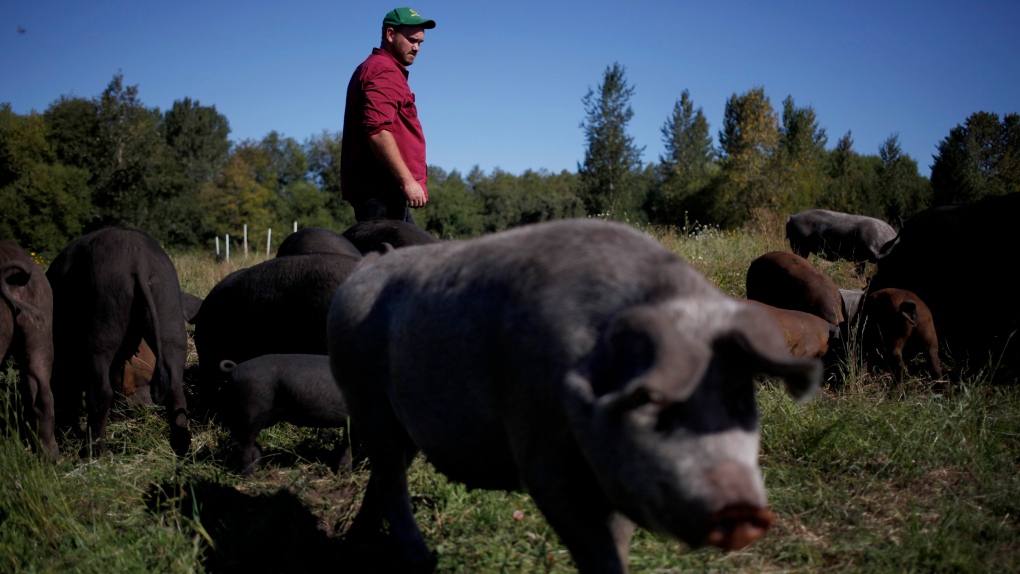 Lentelus Farms owner and operator Dave Semmelink is photographed on his farm with his English large black crossed with Duroc pigs where he sells pork to customers through a subscription service in Comox, B.C., on Wednesday, August 28, 2019. THE CANADIAN PRESS/Chad Hipolito

VANCOUVER -- While working door-to-door pitching deals for a year's worth of frozen meat, Marc Lafleur realized consumers want quality, local meat, but can't afford the freezer space or the cash to do it.

He co-founded TruLocal, one of many meat-subscription-box companies to start delivering in Canada in recent years to feed consumer cravings for local, ethically raised meat without logistical hassles. They also solve problems for the farmers who no longer have to worry about finding customers and stand to make more money.

"We pretty much started off ... in a garage. We had a couple of chest freezers," said Lafleur, CEO of Kitchener, Ont.-based TruLocal, who co-founded the company in 2016 with an initial offering of four products and only 30 customers.

Lafleur attributes the rapid growth to customers' desire to understand where their meat comes from. When the company surveyed customers about what matters to them when purchasing meat, their No. 1 demand was transparency.

"They wanted to have as much information as possible about where their products were coming from," he said.

The convenience factor doesn't hurt either.

A small box of meat costs less and is easier to store than the full-year supply Lafleur peddled previously. In cities, many people live in small spaces -- with some micro-condos even doing away with ovens -- and don't have the space for a chest freezer. It can also be easier to afford a monthly payment than an annual lump sum, he said.

Before subscription-box companies emerged, only the most motivated city dwellers could find a farmer to purchase meat from.

Victor Straatman, who co-founded Meatme in 2006, recalls trying to do just that when he moved to Vancouver from the Netherlands, where he was able to purchase local meat online. He couldn't find a similar system in Canada and eventually found a farmer who agreed to drive six hours to meet him in a parking lot in the city to sell him some meat.

But increasingly, Canadians expect to be able to order their food -- and most anything else they need -- online. Canada's major grocers spent the past few years implementing and quickly expanding their e-commerce offerings, and subscription box companies offer that same benefit to time-strapped home cooks.

In order to succeed, though, these companies also had to offer an incentive for farmers to work with them.

"They basically can focus on what they like to focus on, (which) is raise their animals," said Straatman. "And then we actually deal with the rest -- so the whole butchering process, and all the logistics to get their product to people's door."

Dave Semmelink knows he must sell the meat of the livestock he raises on his more than 40-hectare farm on Vancouver Island, but he hates that part of his job. The introvert prefers to spend his time among his pigs, chickens and lambs, plus he finds it difficult to put on a sales hat after 14-hour days of manual labour and admits he lacks the skills to build and manage a website.

For several years, he attempted to sell his meat online to customers in the Lower Mainland. But he stopped travelling to Vancouver last year for deliveries because of complicated logistics and the cost of the ferry.

He started working with Meatme a few months ago and, so far, "it's been amazing" in no small part because the company took over promoting his products, connecting him with customers and relieving the nightmare of shipping logistics.

It also pays better than selling his meat to packing houses via auction, which he said would offer him a quarter of what Meatme pays. In that scenario, Semmelink says, "I couldn't make a living."

Farmers who sell meat through conventional methods tend to earn about 16 cents on every $1 at retail, said Luke Armstrong, who co-founded Niku Farms, a Toronto-based meat-subscription-box company.

Under his company's model, they earn at least three times that, he said, partly because the company strives to purchase as much of one animal as possible rather than just a few cuts.

At farmers' markets or restaurants -- both alternative sales outlets -- buyers tend to want one or just a few specific cuts, meaning it can be hard to find a buyer for remaining chunks of the animal.

Farmers and shoppers appear to be buying into the new model.

"It's been incredible growth," said Armstrong. The company started with one farm supplying it, and now boasts seven and is bringing on several more to satisfy consumer demand.

One farmer Niku Farms works with initially supplied five boxes a week to the company, but now they're ordering much more from him. He's currently on track to produce 10 times more beef than last year and almost 300 times more chicken, said Armstrong.

Semmelink started out selling four pigs a month to Meatme, but they plan to increase that to 20 hogs in the future.

"I'd love to grow with them as they grow, and I have the capacity to supply them with as much as they want."