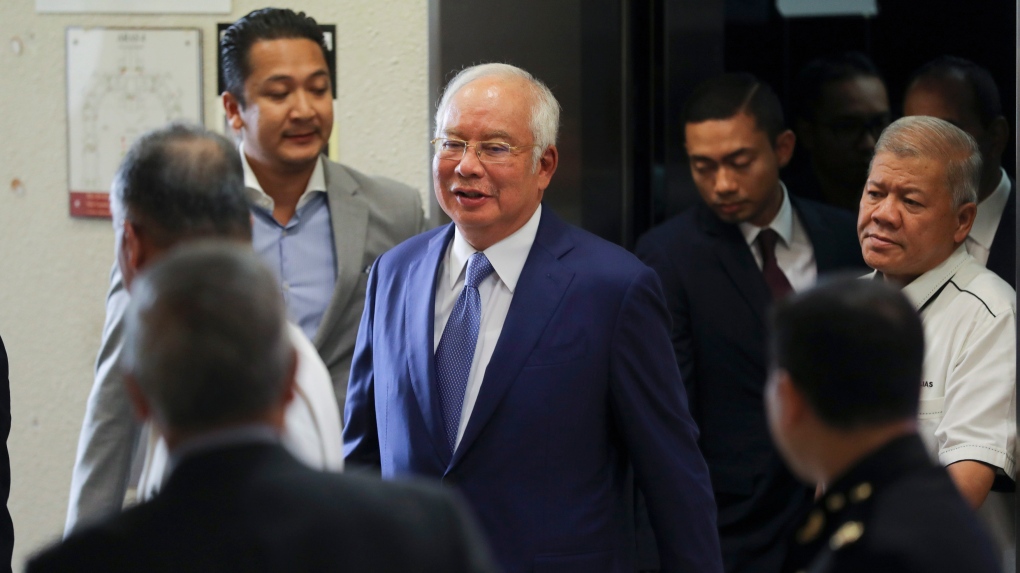 KUALA LUMPUR, Malaysia -- Former Malaysian Prime Minister Najib Razak's second corruption trial started Wednesday, with a prosecutor alleging he pilfered billions of dollars from the 1MDB state investment fund through an "elaborate charade" and then sought to cover his tracks.

Chief prosecutor Gopal Sri Ram said in his opening remarks that the prosecution would show how Najib took steps to channel 1MDB money into his accounts using a "circuitous route" to prevent detection of the source of the funds and then later pretending that the fund was donated by an Arab prince.

He told the High Court on Wednesday that prosecutors will also show that fugitive financier Low Taek Jho, better known as Jho Low, was Najib's "alter ego" and that the two acted as one in the scam. Low, 37, has been charged in both the U.S. and Malaysia for his alleged role as the mastermind in the 1MDB scandal.

"An elaborate charade was employed. It was acted out in four phases in which several characters played a part but it was the accused who played the pivotal role. His objective was to enrich himself," Sri Ram said.

"The prosecution will prove that the accused, by his words and conduct, made it clear to 1MDB's officers, its board and others that Jho Low was his alter ego. In truth, Jho Low was the accused's mirror image."

Najib faces 42 charges of corruption, abuse of power and money laundering in five separate criminal cases linked to the 1MDB scandal that contributed to his shocking electoral defeat last year.

His first trial, involving seven charges linked to transfer of funds from a former 1MDB unit to Najib's bank accounts, ended Tuesday after five months. The judge will rule Nov. 11 on whether to acquit him or call his defence.

In the second trial, Najib faces four counts of abusing his power to receive more than $731 million from 2011 to 2014, and 21 other charges of receiving, using, and transferring illicit funds linked to 1MDB.

He faces up to 20 years in prison for each count of abuse of power and up to five years for each of the 21 money laundering charges.

Sri Ram gave lengthy details of how money was raised and then siphoned through "sham" joint ventures, financing agreements, suspicious asset acquisitions and using intermediary companies and individuals linked to Low, including two Saudi princes he only mentioned as "Prince Faisal and Prince Turki," without giving their full names or background.

After the scandal first broke in 2015, he said Najib and Low used fake letters and checks to pretend that the $681 million channeled into Najib's bank accounts were largely a donation from an Arab prince. Najib also interfered in the investigations, Sri Ram added.

Najib set up 1MDB when he took power in 2009 to promote economic development, but the fund amassed billions in debts and is being investigated in the U.S. and several other countries.

The attorney-general cleared Najib in January 2016, saying the money in his bank accounts were given by an Arab donor ahead of 2013 general elections and most of it has been returned. But U.S investigators say Najib's associates stole and laundered $4.5 billion from the fund, including the money that landed in Najib's bank accounts.

Defence lawyer Muhammad Shafee Abdullah told reporters after the hearing ended for the day that his client was misled by Low, and that prosecutors have a tall task to prove that Low was Najib's alter ego.

Najib "honestly believed" it was a Saudi donation as he had met the Saudi king and was promised the money, Shafee said. Even if prosecutors could prove documents showing the money was the Saudi donation were fabricated, he said they must also show that Najib knew about it.

The new government reopened investigations stifled under Najib and barred him and his wife from leaving the country. Police also seized jewelry and hundreds of handbags and other valuables estimated at more than 1.1 billion ringgit ($273 million) from properties linked to Najib.