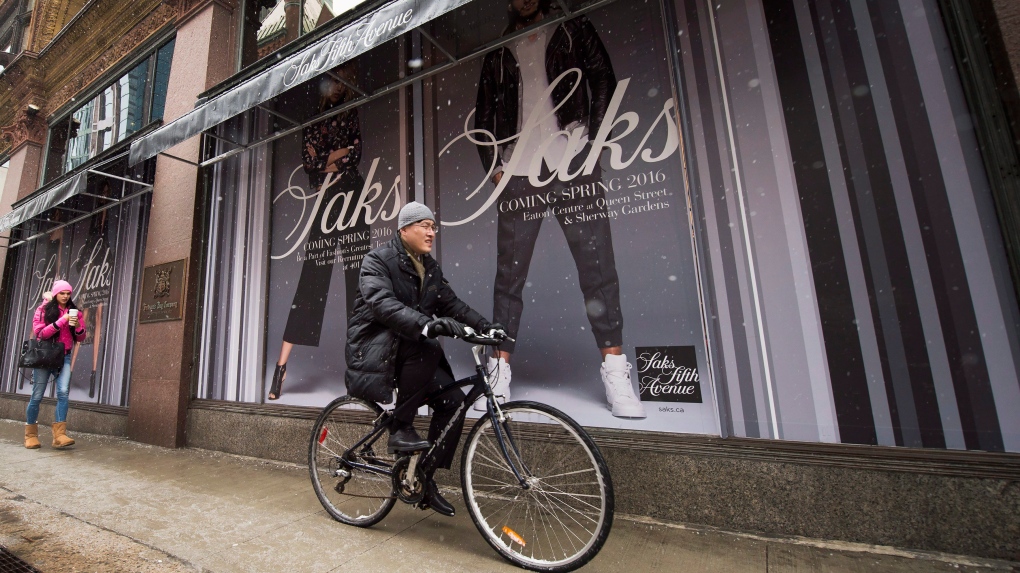 TORONTO - The recent arrival of U.S. luxury retailers Saks Fifth Avenue and Nordstrom have left many wondering if Canadian shoppers are as hungry for high-end goods as originally believed.

Retail experts say the answer to that question is a definite yes - but it all lies with the mystifying millennial market.

"Everybody is grappling with how to get a hold on the millennial consumer," Doug Stephens, an analyst with Retail Prophet, said in a recent interview.

"The problem is that nobody can figure them out yet. They are very different from their parents in how they regard luxury."

That's why it's becoming increasingly important for retailers to build brand loyalty among millennials as early as possible, before they enter their peak spending years.

In the past, luxury was a pair of $400 Prada sunglasses or a $2,900 Louis Vuitton handbag. Now millennials - commonly defined as those born from the early 1980s to the early 2000s - view luxury as part of an experience that they can share on Instagram or Snapchat with their friends.

Stephens says high-end goods can still complete the luxury lifestyle, but just owning something expensive doesn't mean as much to the millennial as it may have to their parents - they want to experience the luxury.

"It's about being at an exclusive penthouse party or having the ability to travel and have a life that is luxurious as opposed to having simply a BMW parked in the driveway," he said.

Holt Renfrew knows how critical it is to capture the millennial market, anticipating that Gen Y-ers will make up more than half of their customer base by the end of 2017.

"A lot of them may not have the means to be our highest-spending customers right now, but we absolutely recognize that they will grow in importance as they grow in their careers," said Alison Simpson, senior vice-president of marketing and customer experience at the national luxury chain.

Capturing the attention of these "digital natives" is a difficult task. At Holt's, they've made a big effort to attract millennial shoppers by engaging with them over social media, curating outfits for special online magazines and even driving a mobile truck around Toronto to showcase the season's latest looks.

Simpson says even though some millennials don't have the cash to splurge on luxury items everyday, they still find the money to buy quality.

"The level of craftsmanship is critically important to them as well. It's not just about 'I can get more for less money,"' she said.

"It's not about the quantity game for them, especially for select pieces like a great pair of shoes, a great bag, a great coat. It's much more about an investment and valuing the craftsmanship and time that went into preparing it. It's not just about cheap and cheerful."

Earlier this month, Square One Shopping Centre west of Toronto opened a new "luxury wing." Among the personalized services, the renovated space features a concierge who can make dinner reservations for you and a valet who can park your car in one spot at the mall, then pick you up at the other end after the shopping spree is complete.

"Luxury is the idea of the experience of exclusivity, authenticity," she said. "There was a time when luxury meant price .... High-priced items (were) luxury items, but nowadays, something could be $5, but if it's rare and one of a kind, then that's luxury."

"All these retailers are flooding into Canada, and millennials are the big opportunity," said Efros, president of HRC Advisory. "Otherwise, (retailers are) going to be cannibalizing from each other because the pie is not going to grow."