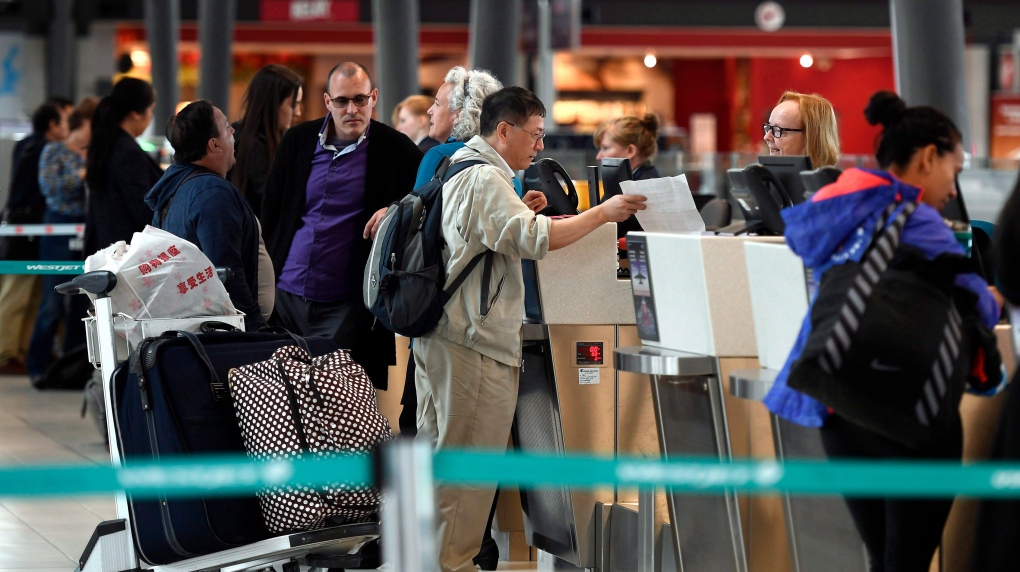 Passengers check in for flights in the departures terminal at the Ottawa International Airport on Monday, May 28, 2018. (THE CANADIAN PRESS / Justin Tang)

In an open letter to the government Thursday, AirHelp wrote that the rules impose no obligation on airlines to pay customers for delays or cancellations if they were caused by technical problems discovered on the tarmac.

"If you incentivize them to not have any problems at the pre-flight check, you decrease the risk of undiscovered issues," AirHelp's chief legal officer Christian Nielsen said in an interview.

Mechanical malfunctions identified during regular maintenance and causing prolonged delays would lead to compensation. "But the issue is that aircraft that are part of regular maintenance are not operating, they're not in the rotation, so they will almost never lead to a delay of a scheduled flight," Nielsen said.

Transport Minister Marc Garneau has insisted that airlines won't mess around with safety and dismissed the idea they will look for ways to avoid compensating passengers. He has pointed to the European Union as having similar regulations.

Nielsen disputed that defence, blaming the airline industry for having "misinformed" the minister.

"Under EU law, all mechanical malfunctions that lead to a delay of more than three hours trigger compensation. The idea here is that you penalize airlines that are not properly maintaining their fleet," he said.

Garneau spokeswoman Delphine Denis said the government is "standing up for Canadian travellers and ensuring that air travellers are treated with fairness and respect."

"We are establishing clear standards of treatment and possible compensation for passengers in common situations like delays, denied boarding, lost baggage, and tarmac delays," she said in an email.

Barring the loophole, the government's passenger bill of rights would see passengers who are bumped from overbooked flights or forced to sit through long delays receive up to $2,400 in compensation.

The proposed compensation will use a sliding scale, with larger airlines and longer delays requiring bigger compensation payments. Payments to passengers whose flights are delayed will max out at $1,000 and cancellations at $2,400.

In addition to compensation, the proposed rules would also require airlines to provide delayed passengers with food, beverages and accommodation.

He pointed to an Air Canada flight from Vancouver to Hawaii on Christmas Eve that turned back mid-flight for maintenance reasons. That would qualify as a delay or cancellation, Lukacs said, on par any other prolonged flight hold-up prompted by mechanical issues identified during a pre-flight check.

"Under the proposed legislation, nobody in those situations would get anything in the way of monetary compensation." In the EU, however, passengers would be owed 600 euros each, he said.

Public consultation on the proposed rules is slated to run until Feb. 20.