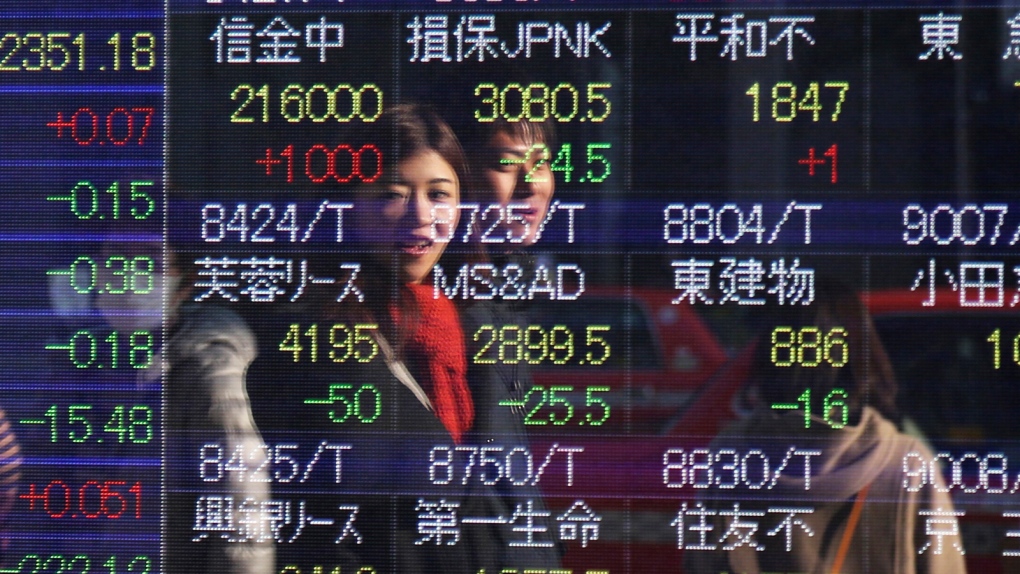 People are reflected on the electronic board of a securities firm in Tokyo, Tuesday, Dec. 30, 2014. (AP / Koji Sasahara)

The gain came despite Statistics Canada reporting that overall employment shrunk by 2,100 jobs in April, while the national jobless rate remained unchanged at 7.1 per cent.

"I believe that certainly it's weighing on the Canadian dollar," said Todd Mattina, chief economist at Mackenzie Investments.

The real concern about the report, he said, is that Canada lost 16,500 manufacturing jobs in April.

"This is really important for Canada because we need to make that rebalancing from a resource-based, oil-type of economy to a more manufacturing, export-led economy," said Mattina. "So we really need to see a more robust manufacturing picture."

This report, coupled with a trade report earlier this week that showed Canada's trade deficit with the world grew to $3.4 billion in March, paints "a fairly pessimistic picture heading into the second quarter," he said.

In New York, markets turned positive after a slight slump following a U.S. Labor Department jobs report that fell below analyst expectations. Employers created just 160,000 jobs last month, according to the report, while analysts anticipated about 200,000.

"I think, you know, markets didn't get any relief from the U.S. payroll report after a fairly disappointing week for stocks," said Mattina.

In commodities, the June contract for bench North American crude rose 34 cents to US$44.66 a barrel.

The ongoing wildfires in Fort McMurray, Alta., have forced some companies to shut or reduce operations and there was concern Friday that as much as half of Canada's oilsands production may have been cut.

This reduced supply is driving up oil prices, said Mattina.

The economic and financial impact of the Fort McMurray wildfires will also put a serious dent in economic growth in Canada during the second quarter, he added.

"We should see a V-shaped rebound or recovery coming out of the second quarter, as you might expect a rebound in investment spending to rebuild housing and infrastructure," he said.