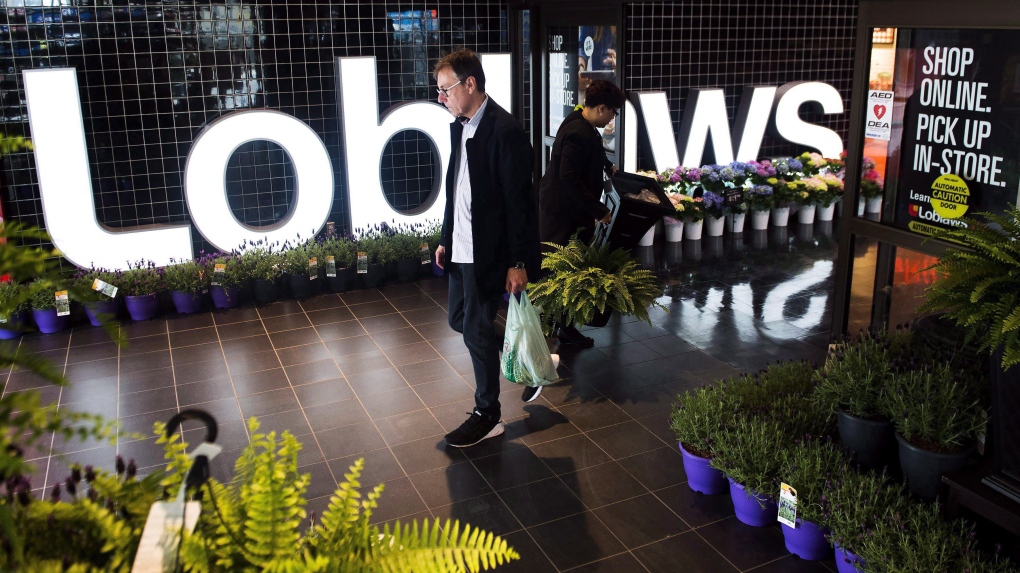 A man leaves a Loblaws store in Toronto on Thursday, May 3, 2018. (THE CANADIAN PRESS / Nathan Denette)

BRAMPTON, ONT. -- Loblaw Companies Ltd.'s year-long pandemic winning streak marked by blockbuster sales and profits appears poised to start levelling off as the supermarket giant starts to lap the panic-buying gains it recorded at the outset of the pandemic.

Yet ongoing restaurant closures amid lockdowns continued to benefit Canada's biggest grocery and drugstore retailer during its most recent quarter as people cooked more meals at home.

Loblaw said Wednesday its profits were up 30 per cent to $313 million in the first quarter of 2021 compared with a year ago. Revenues for the three months ended March 27 totalled $11.87 billion, up from $11.8 billion.

The company's strong results were buoyed by an improvement in its financial services business, as well as better-than-expected gross margins in food and drug sales.

However, Loblaw signalled that as the economy begins to reopen, revenue growth will be challenging going forward.

"I think it's a reasonable expectation that it's going to start to flatten out," Loblaw president Sarah Davis told analysts during a conference call ahead of her retirement on Thursday. "We're not going to see the high growth that we saw last year."

Indeed, most grocers have indicated that financial results will become more muted as they lap the elevated sales recorded during the first wave of COVID-19 when consumers stockpiled goods in an effort to limit their shopping frequency and abide by stay-at-home orders.

"Food retail same-store sales were relatively flat," Loblaw chief financial officer Darren Myers -- who will also be leaving the company after its annual general meeting on Thursday -- said during the call with analysts.

"Same-store sales continued with strong momentum from the fourth quarter before lapping the COVID-related pantry stocking from 2020, which drove same-store sales last year of 9.6 per cent, including 44 per cent in the final two weeks of the quarter."

Meanwhile, the company's higher profits came as the company's financial services segment saw a $20-million reduction in its expected credit loss provisions in the quarter compared with a $50-million increase in the first quarter of 2020.

This report by The Canadian Press was first published May 5, 2021.