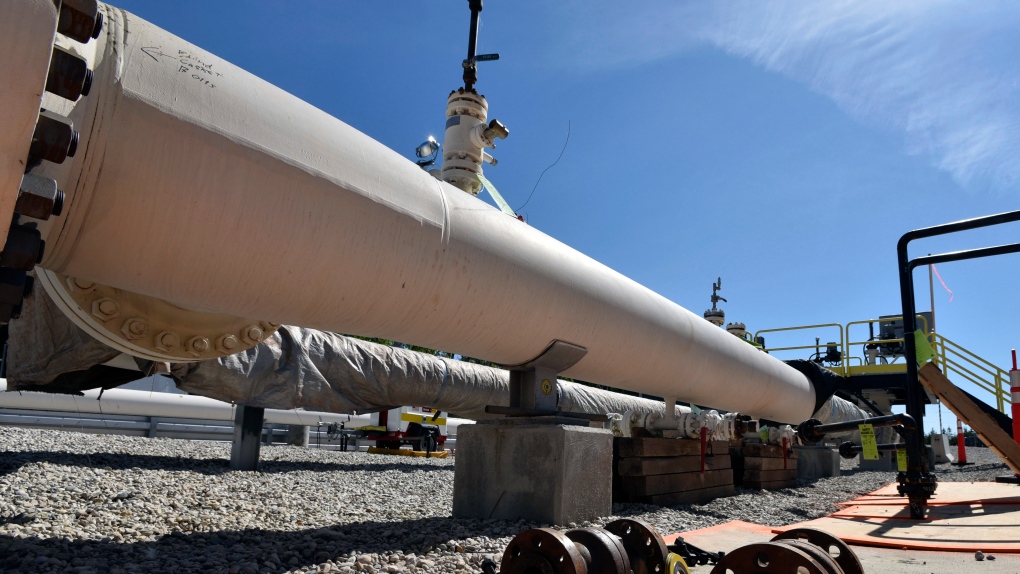 In this June 8, 2017, file photo, fresh nuts, bolts and fittings are ready to be added to the east leg of the Enbridge Line 5 pipeline near St. Ignace, Mich. (Dale G. Young/Detroit News via AP, File)
WASHINGTON -

Lawyers for Enbridge Inc. are asking a judge in Michigan to consider the bilateral implications of the state's bid to shut down the Line 5 cross-border pipeline.

Newly filed court documents say the dispute is now well and truly a federal matter because Canada has formally invoked a 1977 pipeline treaty with the United States.

Enbridge is arguing that as a result, U.S. District Court Judge Janet Neff should grant its original motion to have the case moved to federal court.

The 68-year-old Line 5 can carry as much 540,000 barrels of crude oil and natural gas liquids per day beneath the Great Lakes to markets throughout the U.S. Midwest.

Michigan Gov. Gretchen Whitmer wants it shut down for fear of a catastrophic spill in the Straits of Mackinac, an ecologically sensitive waterway that links Lake Michigan and Lake Huron.

Enbridge, which has warned such a move would have dire consequences for energy consumers in both countries, says it will not shut down the line voluntarily.

“Now that the dispute resolution provisions of the treaty have been formally invoked - resulting in more formal diplomatic negotiations and potentially an international arbitration concerning Michigan's unilateral efforts to force closure of Line 5 - this development should be made part of the record,” lawyers for Enbridge argue.

In the motion they are seeking leave to file, they say Michigan's claims “have directly and significantly affected U.S. foreign relations with Canada.”

A court-sanctioned mediation process, which began in April, has failed to yield any agreement and appears to have fallen apart, although the official status of those talks remains unclear.

Court documents show Michigan has no “desire to continue with the mediation process,” while Enbridge wants the talks to continue.