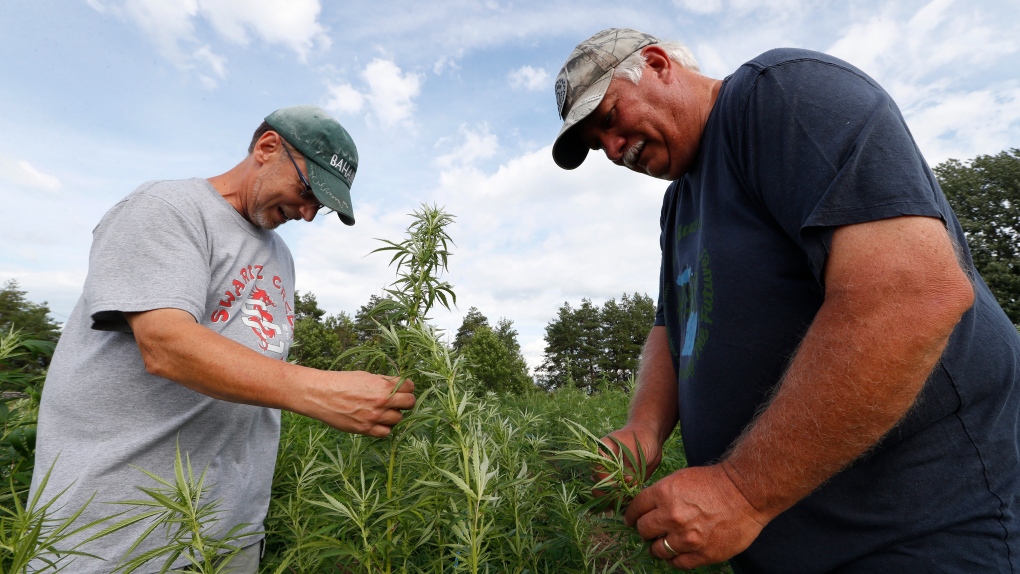 CLAYTON TOWNSHIP, Mich. -- Dave Crabill and two business partners started small for their first foray into farming hemp, growing two strains of the now-legal cousin of marijuana on an acre along a dirt road outside the industrial city of Flint.

The endeavour wasn't easy. Flooding from record rain stunted some plants. Crabill and others had to carefully walk the field and uproot 1,000 undesirable males, a third of the plants, to protect more valuable females. Some plants were stolen. And it's still not clear whether they will make money from the effort, which Crabill likened to "planting $20 bills and hoping to harvest $50."

"That's why we did the 1 acre," said Crabill, who runs a small marketing company and is among more than 500 people who registered this year as hemp growers in Michigan, many hoping to capitalize on the growing demand for the extract CBD. "Something manageable. We can make mistakes and it won't kill us. ... We're all going to be smarter next year."

The legalization of industrial hemp in the U.S. less than a year ago has sparked interest from both traditional farmers and newbies like Crabill. The early stages are proving tricky, but up for grabs is a lucrative market, one that could grow more than five-fold globally by 2025 -- driven by demand for CBD. The compound, which doesn't cause a high like that of marijuana, is hyped as a health product to reduce anxiety, treat pain and promote sleep.

The U.S. is the biggest hemp-importing country, and even before the cannabis plant was fully legalized federally, some states ran pilot programs under the 2014 farm bill. Last month, the U.S. government finalized an interim national regulatory framework that is expected to pave the way for the crop's widespread commercialization starting as early as 2020.

In Michigan, farmers who participated in the state's first growing season since World War II cover the gamut -- including cannabis enthusiasts and large-scale operators who want to diversify beyond low-price commodities.

For attorney Keith Hagen and his two farmer brothers, branching out past sugar beets, wheat and dry beans was primarily a financial decision. They founded Hempure Farm in Ubly and grew 340 acres (140 hectares) of hemp, the most statewide.

"There's not a lot of money being made in any crop right now. The margins are so small ... and then you start piling on tariffs and those margins even get smaller," Hagen said. "So when something new like hemp popped up, well they've got the agricultural expertise. It then just turned into a matter of learning as much as you can on how to do this."

Producing hemp, especially for CBD extraction, is labour-intensive. Obtaining high-quality seeds can be difficult and expensive. Weed control is an issue; little is known about safely or legally using pesticides. Before a crop is harvested, it's tested for THC, the chemical in cannabis that causes a high. If the level is "hot," above 0.3%, the plants must be destroyed.

"It's incredibly complicated," Hagen said, pointing to "countless minefields" facing farmers, many of whom "will probably lose their shirt, for lack of a better term."

Vote Hemp says more than 30 states issued 17,800 licenses to farmers and researchers in the wake of hemp's legalization, more than quintuple the 2018 figure. Of the half a million acres (202,350 hectares) covered, though, an estimated 295,000 (119,000 hectares) weren't planted because of limited access to seedlings and clones, a lack of financing and a "huge number" of inexperienced growers, according to the non-profit advocacy group. It estimates that about 50% to 60% of the planted acres, or 120,000 (48,560 hectares) to 144,000 (58,280 hectares), will be harvested, once crop failures, non-compliant plants and other factors are factored in.

The industry also is closely tracking the U.S. Food and Drug Administration. Though products containing CBD are already in stores and sold online, the agency says CBD-infused foods, drinks and dietary supplements are illegal. It's exploring ways that the compound might officially be allowed.

"There is a bit of a medicinal market and there is a bit of an almost salon-type market," said Hagen, who expects to produce about 1.5 million dried pounds (680,000 kilograms) of hemp this year for use in products such as lotions and oils. "The real launching point, though, is when the FDA allows CBD to be put into real consumable products. That's where we'll really see what this can do."

Ron Bates, director of the Michigan State University Extension's Agriculture and Agribusiness Institute, said that would-be growers should have contracts in place in advance.

"You just don't harvest this stuff and take it to the elevator and sell it," he said. "The market infrastructure's just not there yet."

For now, many states are playing catch-up.

"This is really a learning year for everybody," said Gina Alessandri, Michigan's industrial hemp program director. "There still are a lot more questions than answers for many people."