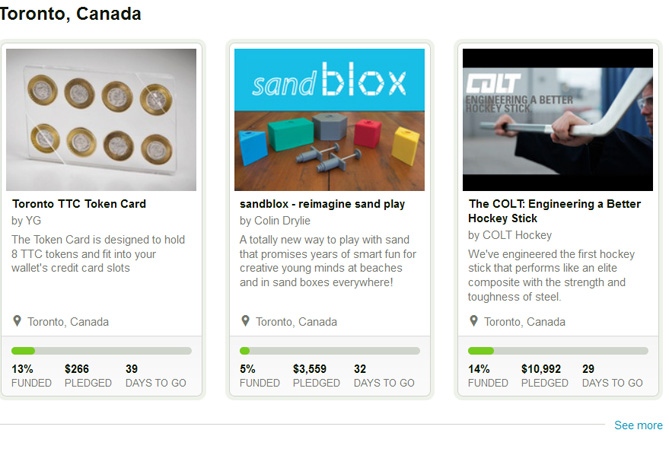 Kickstarter in Canada: TTC token holder, sandblox and a better hockey stick up for investment (Image from Kickstarter.com)

New York-based Kickstarter launched in Canada amidst a four-day visit to Toronto by co-founder Yancey Strickler.

Strickler says the company had long wanted to move into Canada but was kept away due to financial regulations.

Kickstarter's crowdfunding model, in which investors pledge cash toward a project or business in exchange for products and perks, only grants money to entrepreneurs if the entire funding goal is met.

If the target is not met by a set date, the money goes back to those who pledged.

"It's not specific to Canada. We have a very unique model. People are only charged if funding goals are met," he said.

"As we expand into other countries, there's just a lot of work that has to go into place."

Strickler said that while the Canadian crowdfunding scene is currently dominated by another platform, Indiegogo, he is confident Kickstarter will prevail.

Kickstarter claims it has raised more than six times as much money as Indiegogo has, while 40 projects have generated more than $1 million in pledges, versus only four for Indiegogo.

"The success rate, the people who use the site and the size of the community -- pretty much every box you can check -- Kickstarter is clearly a great service," said Strickler.

The project to build a watch that wirelessly links to a smartphone raised $10.3 million within a month, and eventually garnered an additional $15 million through investors.

Prior to Monday's official launch some Canadian entrepreneurs were accessing Kickstarter by skirting the registration rules. Canadians had to use American partners or American registered businesses to create a Kickstarter project.

There are now more than 3,000 Canadian projects currently seeking funding on Kickstarter.

The vice-president of research for the Canadian Federation of Independent Businesses, Doug Bruce, said in an email that Kickstarter's inclusion of Canadians is a significant step for small businesses. But he added that entrepreneurs would benefit if they could woo investors with the promise of equity in their company and not just perks.