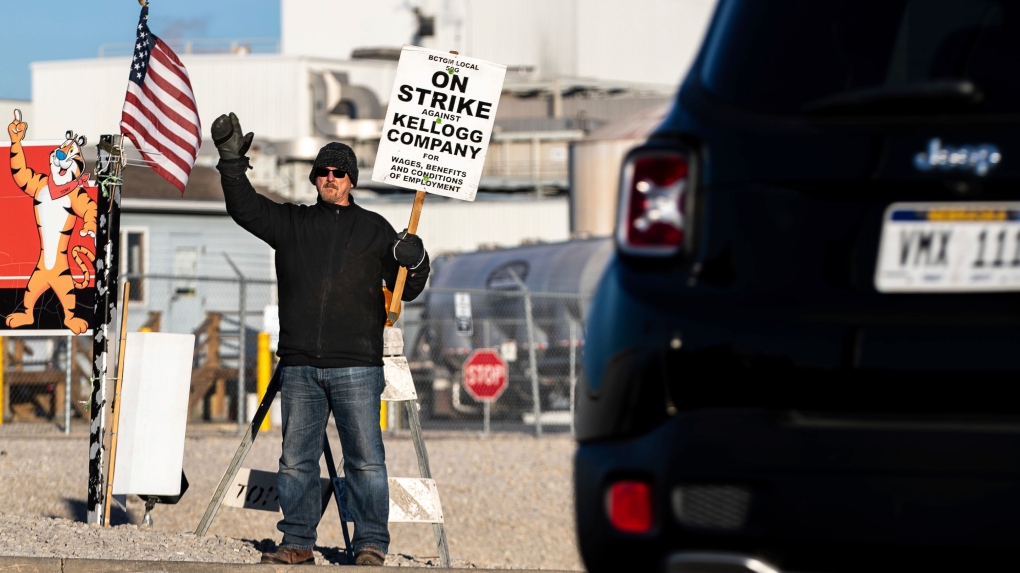 Kirk Peters waves to passing cars as they honk in support of Kellogg's workers on strike along I Street in Omaha, Neb. on Tuesday, Dec. 7, 2021. (Lily Smith/Omaha World-Herald via AP)

U.S. Kellogg's workers rejected a contract offer Tuesday that would have provided 3 per cent raises, so 1,400 workers at the company's four U.S. cereal plants will remain on strike.

The Bakery, Confectionary, Tobacco Workers and Grain Millers International Union said an overwhelming majority of workers voted down the five-year offer that would have also provided cost of living adjustments in the later years of the deal and preserved the workers' current health care benefits.

The workers have been on strike since Oct. 5 at plants in Battle Creek, Michigan; Omaha, Nebraska; Lancaster, Pennsylvania; and Memphis, Tennessee. They make all of the company's well-known brands of cereal, including Apple Jacks and Frosted Flakes.

"The members have spoken. The strike continues," union President Anthony Shelton said. "The International Union will continue to provide full support to our striking Kellogg's members."

Kellogg's said it will now move forward with plans to start hiring permanent replacements for the striking workers. The company has already been using salaried employees and outside workers to keep the plants operating during the strike.

"While certainly not the result we had hoped for, we must take the necessary steps to ensure business continuity," said Chris Hood, president of Kellogg North America. "We have an obligation to our customers and consumers to continue to provide the cereals that they know and love."

Rutgers University professor Todd Vachon, who teaches classes about labor relations, said he's not sure the company will be able to hire enough workers to replace the ones who are out on strike in the current economy, and Kellogg's may have a hard time finding people willing to cross a picket line.

"By voting `no,' the workers are making a strong statement that they are not satisfied by the agreement, but they are also signaling they believe they have the leverage that's needed to win more," Vachon said.

One of the sticking points in the negotiations has been the company's two-tiered system of wages that givers newer workers at the plants less pay and fewer benefits. As many as 30% of the workforce at the cereal plants have been receiving those lower wages. The Battle Creek-based company said the new contract will allow all workers with at least four years of experience to move up to the higher legacy pay level immediately and some additional workers would move up in the later years of the contract.

Dan Osborn, who is president of the local Omaha union, said the company's offer wouldn't let enough workers move up to the higher pay level quickly, so some newer workers might have to wait as much as nine years to reach the higher legacy pay level. The proposed contract would have limited the number of workers who could move up in pay each year to 3% of a plant's total headcount.

"Ultimately, we don't want to leave anyone behind. And we want a secure future," Osborn said.

Union members would also like to see the company offer bigger raises to its mechanics and electricians so Kellogg's can better compete for those workers, Osborn said.

Victor Chen, a sociologist at Virginia Commonwealth University who studies labor, said he understands why the union is taking a stand against the two-tiered wage system because it is a divisive issue within its ranks.

"A union depends on the solidarity of its members," Chen said. "When you have two-tiered systems -- which have become popular in corporate America -- you're weakening that solidarity. It turns workers against each other."

At times during the strike, the disagreements between the company and the union turned bitter.

Kellogg's went to court in Omaha in November to secure an order that set guidelines for how workers behaved on the picket line because the company said striking workers were blocking the plant's entrances and intimidating replacement workers. Union officials denied any improper behavior during the strike and said police never cited workers for causing problems.

But the workers have been holding out for higher wages because they believe the ongoing worker shortages across the country give them an advantage during the negotiations. Workers at the cereal plants have said they believed they deserve significant raises because they routinely work more than 80 hours a week, and they kept the plants running throughout the coronavirus pandemic.

Earlier this year, about 600 food workers also went on strike at a Frito-Lay plant in Topeka, Kansas, and 1,000 others walked off the job at five Nabisco plants across the U.S. At meatpacking plants across the country labor unions have been successfully negotiating significant raises for employees.

In another recent strike, over 10,000 Deere workers secured 10% raises and improved benefits but those gains came after the workers remained on strike for a month and rejected two offers from the company. The offer that Kellogg's workers rejected was the first one they have voted on since the strike began.