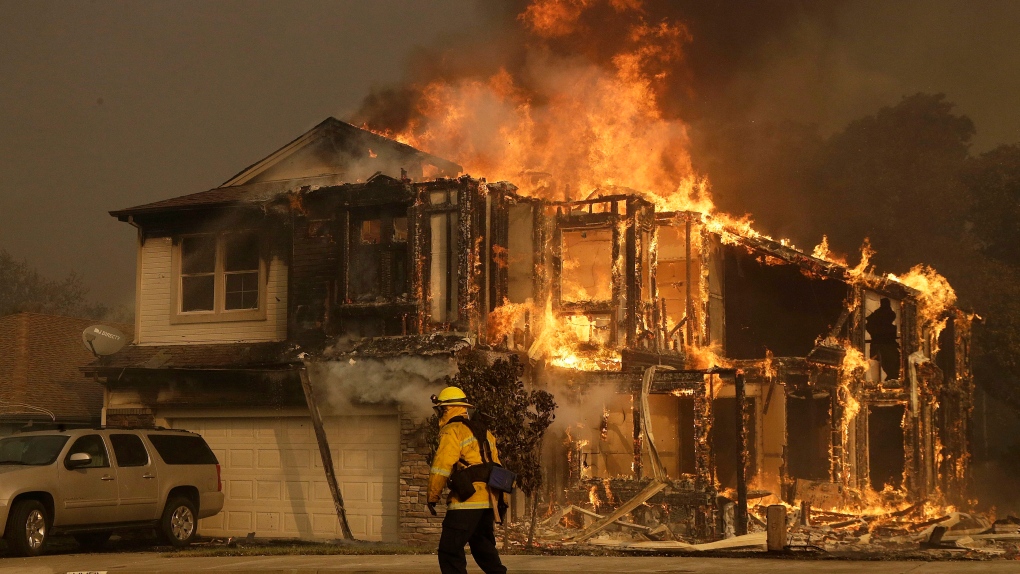 In this Oct. 9, 2017, file photo, a firefighter walks near a flaming house in Santa Rosa, Calif. A judge presiding over Pacific Gas and Electric's bankruptcy case is going to allow a state jury to decide whether the power company's equipment was the spark of the deadly 2017 fire. (AP Photo/Jeff Chiu, File)

State fire investigators have already determined the fire that killed 22 people and destroyed more than 5,000 homes in the Santa Rosa area was caused by a private electrical system.

Victims of the fire disagreed and demanded a jury trial. Meanwhile, PG&E Corp. argued that the bankruptcy process should determine whether it should be held liable for the fire.

U.S. Bankruptcy Judge Dennis Montali ruled that a state court was a suitable venue for resolving the matter.

If a jury decides the company is responsible for the fire, PG&E could face a far more costly exit from bankruptcy.

The utility won a legal victory in a separate ruling by Montali, who decided PG&E can retain control of the bankruptcy process when he denied requests by two groups of creditors to file their own Chapter 11 exit plan.

Montali wrote that although the bids were tempting, opening the door for competing restructuring plans would lead to an expensive and lengthy process that has "little or nothing to do with compensating victims of enormous and unimaginable tragedies."

PG&E said it plans to submit a plan on or before Sept. 9 for paying off its debt and reorganizing its finances.

"PG&E has made significant progress in further refining a viable, fair, and comprehensive plan of reorganization that will compensate wildfire victims, protect customer rates, and put PG&E on a path to be the energy company our customers need and deserve," the company said in a statement.

PG&E is under pressure to get out of bankruptcy by June in order to participate in a multibillion-dollar wildfire insurance fund created by state lawmakers.

The San Francisco-based utility filed for bankruptcy in January after it said it could not afford an estimated $30 billion in liabilities from recent California wildfires its equipment may have ignited.

A PG&E power line was blamed for setting a November fire that killed 86 people and nearly wiped out the town of Paradise. State fire investigators blamed PG&E equipment for several other wildfires that happened in wine country in 2017.