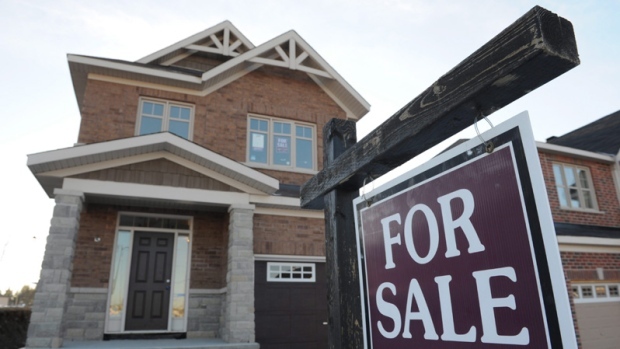 A house for sale is pictured in this undated file photo.

TORONTO -- The number of homes sold in the Toronto region in January was down 22 per cent compared with a year ago, when the area was experiencing a short-term spike in prices that prompted the Ontario government to cool the market last spring.

The Toronto Real Estate Board says Greater Toronto Area realtors reported 4,019 home sales for January through the Multiple Listings Service, compared with a record 5,155 sold a year ago.

"It is not surprising that home prices in some market segments were flat to down in January compared to last year. At this time last year, we were in the midst of a housing price spike driven by exceptionally low inventory in the marketplace," said Jason Mercer, TREB's director of market analysis.

On a month-to-month basis, the number of GTA home sales was down 18 per cent from 4,904 in December but the average price improved somewhat from $735,088 in December -- which was the second-lowest month in 2017.

The number of new listings last month increased to 8,585, up 17.4 per cent from January 2017 but still the second-lowest in a decade for the month of January.

The real estate board said Tuesday that it expects several measures taken at the provincial and federal level will have a smaller impact on the market as the year progresses.

The Ontario government introduced a set of measures in April of last year aimed at cooling the market. Separately, the Office of the Superintendent of Financial Institutions introduced a new financial stress test for buyers that federally regulated lenders must apply as of Jan. 1.

The real estate board's 2018 outlook, released Jan. 30, anticipates the pace of sales will pick up in coming months -- a message that was repeated Tuesday with the January report.

"It is likely that market conditions will support a return to positive price growth for many home types in the second half of 2018," Mercer said.

"The condominium apartment segment will be the driver of this price growth."

In January, the number of condos sold in the region were down 21.9 per cent from last year but the average price for this housing category was up 14.6 per cent to $507,492.

Meanwhile, sales volume and prices for townhouses, semi-detached and fully detached houses were all down.