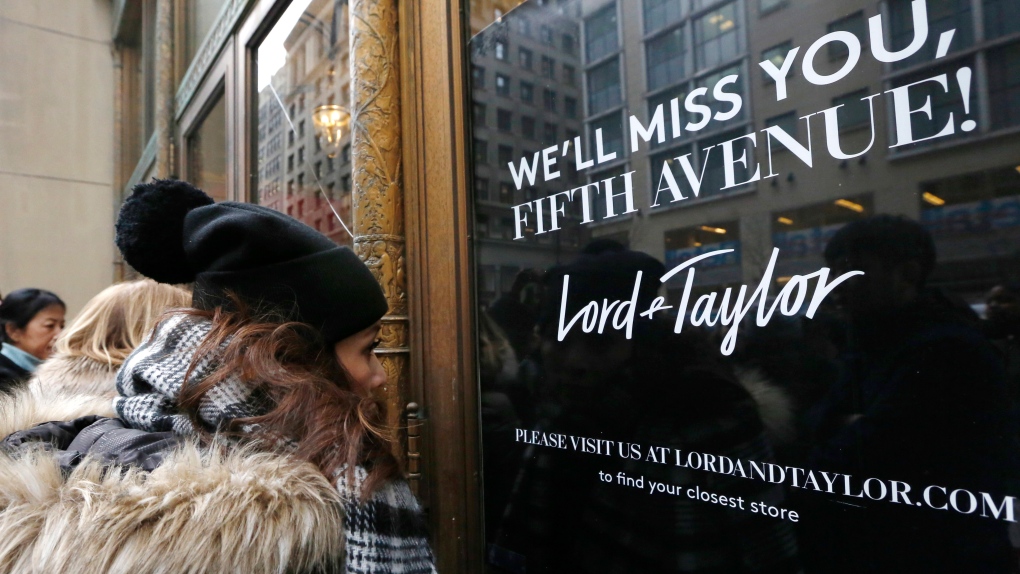 Canada's oldest retailer is selling one of its banners to a clothing rental subscription service while maintaining an equity stake in the new business that the CEO says will be "a first in the industry."

Hudson's Bay Co. will receive $99.5 million in cash from Le Tote for its Lord and Taylor banner when the deal closes, the company said Wednesday, and a secured promissory note for $33.4 million payable in cash after two years.

HBC will also receive a 25-per cent equity stake in Le Tote, two seats on the company's board of directors and certain rights as a minority shareholder.

The deal, which is expected to close before the start of this year's holiday season and comes following a strategic review for alternatives for the banner, marks an exciting new phase for both businesses, said Helena Foulkes, HBC's CEO, in a post on LinkedIn.

HBC declined an interview request, saying the CEO was unavailable.

San Francisco-based Le Tote offers monthly subscriptions for boxes containing several piece of clothing and accessories. Customers can browse online and choose the items they want to rent. The private company, founded in 2012, has raised more than US$75 million in venture capital, according to its LinkedIn page, and has partnerships with hundreds of brands, such as Nike and Calvin Klein. It has more than 200 employees.

Lord and Taylor, meanwhile, sells clothing for men, women and kids, as well as accessories and beauty products online and in stores. It also offers a selection of home products, including bedding and home decor.

Since this acquisition is a combination of cash and equity, it's likely the buyer -- a relatively new company funded by venture capital -- didn't have the money for a clean acquisition, said Kai Li, a professor of finance at the University of British Columbia's Sauder School of Business.

A clean deal would have been just cash, she added.

The equity stake would be of "secondary importance" to HBC, said Li, as the retailer seems to be looking to rid itself of Lord and Taylor, a non-essential asset, as part of its turnaround effort amid years of disappointing results.

The companies will combine data-driven rental subscriptions, online shopping and bricks-and-mortar locations to create a modern service model, said Foulkes, calling it "a first in the industry."

HBC's stake in Le Tote will give it "a meaningful position to share in the success of this new company," but also enable the retailer to focus on its greatest opportunities: Saks Fifth Avenue and Hudson's Bay.

Le Tote management said the deal will bring customers an enhanced experience -- with its website informing shoppers to "get excited for more brands, styles and 1,000s of options" thanks to the acquisition.

"With this acquisition, we continue our journey in creating the future of retail," said Rakesh Tondon, Le Tote's chief executive and founder, in a statement.

Companies such as Le Tote -- with business models that combine subscriptions and selling gently used goods online -- "are well positioned to grow 20 per cent or higher annually," wrote Oliver Chen, an analyst with Cowen Inc.

The real estate details of the deal also seem to work in Le Tote's favour. The subscription box company will assume operations of 38 Lord and Taylor stores.

However, for at least the initial three years, HBC has agreed to maintain responsibility for the rent owed by Lord and Taylor at the locations operated by Le Tote. HBC expects to be liable for approximately $77 million in Lord and Taylor total cash rent on an annual basis.

Businesses like Le Tote "will increasingly look at physical points of distribution or partners in order to drive awareness, adoption and customer acquisition as this market grows," said Chen.

The deal to sell the banner comes as a group led by HBC chairman Richard Baker looks to buy the entire company and take it private.

The Baker group has offered $9.45 per share for HBC, however an initial analysis by the company has suggested the offer is "inadequate."

A spokesperson for the shareholder group seeking privatization declined to comment, as did Land and Buildings.

It's possible HBC's streamlining of operations by ridding itself of non-essential assets like Lord and Taylor could result in a higher valuation for any potential privatization or takeover, said Li.

HBC shares closed up six cents or 0.59 per cent at $10.22 on the Toronto Stock Exchange Wednesday after reaching a high of $10.40 earlier in the day.

Companies in this story: (TSX:HBC)