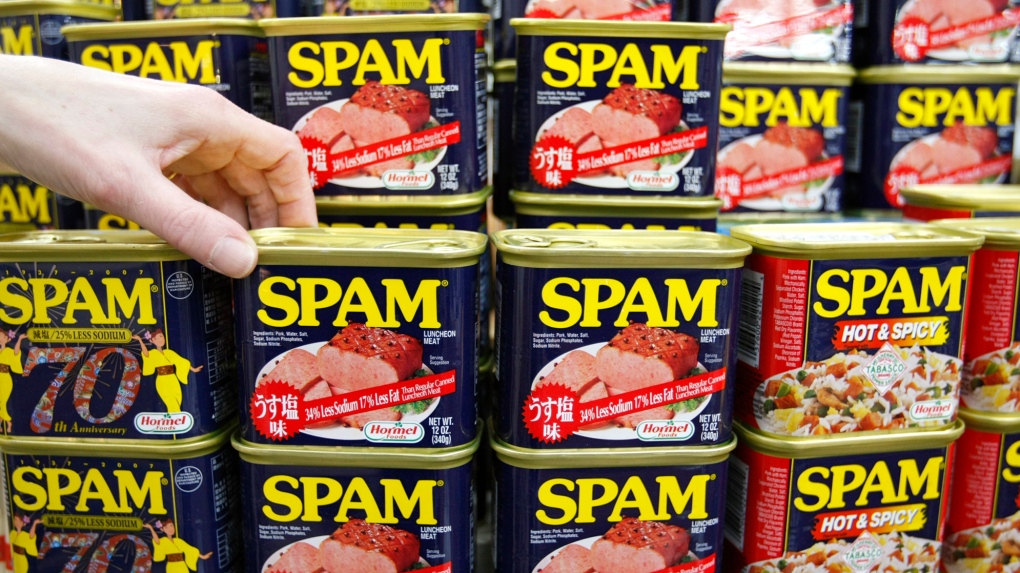 Cans of "Spam" luncheon meat are displayed at a market in Naha on the southern Japanese island of Okinawa March 5, 2008.

Spam is cool. The 85-year-old canned block of meat has undergone a cultural reinvention.

Hormel has sold a record amount of Spam for seven straight years, and 2022 is on pace for another such milestone. The conglomerate behind Skippy and Jennie-O turkey says it can't make Spam fast enough and is increasing production capacity.

Spam is a trending ingredient on TikTok and on the menu at fine-dining restaurants in coastal cities. In 2019, a limited-edition Spam pumpkin spice flavor sold out in minutes. (You can still buy it on Ebay, where it goes for up to $100 per can.)

What is behind this phenomenon? Why does this slab of cooked pork that has long been stigmatized as fake meat, linked to wartime rations and hilariously spoofed on Monty Python now have cachet with foodies?

Edgy and clever advertising campaigns also have helped Spam attract a broader customer range than the Baby Boomers who grew up eating it, sometimes reluctantly.

More than 100,000 visitors stream into the Spam museum every year in Austin, Minnesota, with stories to tell about Spam and recipes to share, said Savile Lord, the manager of the museum in the brand's hometown. Visitors most often ask her and other museum "Spambassadors" how Spam got its name and what the heck is in it.

Spam first hit shelves in 1937 as a 12-ounce, 25-cent, convenient and long-lasting protein in a tin can during the lean years of the Great Depression. Spam contained nothing but pork shoulder, chopped ham, water, sugar and sodium.

It was a concoction of George Hormel and his son, Jay, meatpackers in Austin. The Hormels had been working on the "problem of canning a nonperishable pork product for a good many years and at last we solved it," Jay told The New Yorker in 1945.

They offered a $100 prize for the best name for the food. It needed to be short for display purposes and to fit on one-column newspaper advertisements. It also had to pronounceable in any language.

The brother of a corporate executive threw out "Spam," a combination of "spice" and "ham," at a party, and Hormel "knew then and there that the name was perfect."

From the beginning, Spam was marketed as a time-saver and a food for any meal: Spam and eggs. Spam and pancakes. Spam and beans, spaghetti, macaroni and crackers. Spamwiches.

"Never have you imagined a meat could turn into so many interesting uses. Morning, noon or night -- cold or hot -- Spam hits the spot!" read one early advertisement. Spam was a "miracle meat," the company told consumers in newspaper spots and radio ads.

And then came the United States' entrance into World War II in 1941, the decisive moment in Spam's growth.

At many Pacific outposts, which had little refrigeration or local sources of meat, American and Allied troops relied on the canned meat that could be stored away for months and eaten on the go.

Hormel says more than 100 million pounds of Spam were shipped overseas to help feed the troops during the war. Uncle Sam became known as Uncle Spam, much to the dismay of troops forced to eat it every single day.

"During World War II, of course, I ate my share of Spam along with millions of other soldiers," Dwight D. Eisenhower later wrote to Hormel's president. "I'll even confess to a few unkind remarks about it -- uttered during the strain of battle."

For the citizens of conflict-wracked countries in the Pacific struggling with hunger and famine during the war and rebuilding years, however, Spam was a symbol of access to American goods and services. Sometimes, it was the only protein source available. After US troops left, Spam remained, becoming an ingredient in local dishes.

"Spam became part of Asian culture," said Ayalla Ruvio, a consumer behavior researcher at Michigan State University who studies identity and consumption habits. "It represented a piece of America. It's like Coca-Cola or McDonald's."

American troops also introduced Spam in Korea during the Korean War in the early 1950s, and Budae Jjigae (Army Stew) became a popular Korean dish. Spam also remains a common ingredient in dishes almost anywhere US soldiers were stationed, such as Guam, the Philippines and Okinawa, Japan.

In Hawaii, where the US military has long been a major presence, more Spam is consumed per person than any other state. It's stacked on a block of rice and wrapped in seaweed to make Spam musubi and sold at fast-food chains like McDonald's in Hawaii. There's even an annual Waikiki Spam Jam festival.

Many U.S. soldiers returning from World War II vowed never to eat Spam again, and the brand became linked to rationing and economic hardship. But Spam has appealed to new consumers in the United States in recent years.

"When I first started getting into the brand, we started to notice this transition to a stronger multicultural set of consumers," said Brian Lillis, who has been product's brand manager for six years. "They brought with them the traditions of utilizing the product in their home country or where maybe their ancestors came from."

Hormel has worked with chefs at Korean, Taiwanese and Vietnamese restaurants to get Spam on menus. As more people have been introduced to these dishes, they go home and try to make their own versions, Lillis said.

Spam highlights its versatility in dishes on social media and TV advertisements. There are ads for Spam and eggs, as well as Spam fried rice, Spam musabi, yakitori, and poke.

Spam has made a comeback in the United States because Asian and Asian American chefs such as Chris Oh have tried to reinvent it in their own ways, said Ku, the Binghamton University professor. "They brought some of the culinary influences of Asia and the Pacific and upscaled it."

National Bank of Canada raised its dividend as it reported its fourth-quarter profit fell four per cent compared with a year ago. The increased payment came as National Bank said it earned $738 million or $2.08 per diluted share for the quarter ended Oct. 31, down from $769 million or $2.17 per diluted share in the same quarter last year. Revenue totalled $2.33 billion, up from $2.21 billion a year earlier.

Royal Bank of Canada is taking measures to prepare for a more uncertain year ahead, but results from the past quarter still show gains in key areas like loans and new client additions.