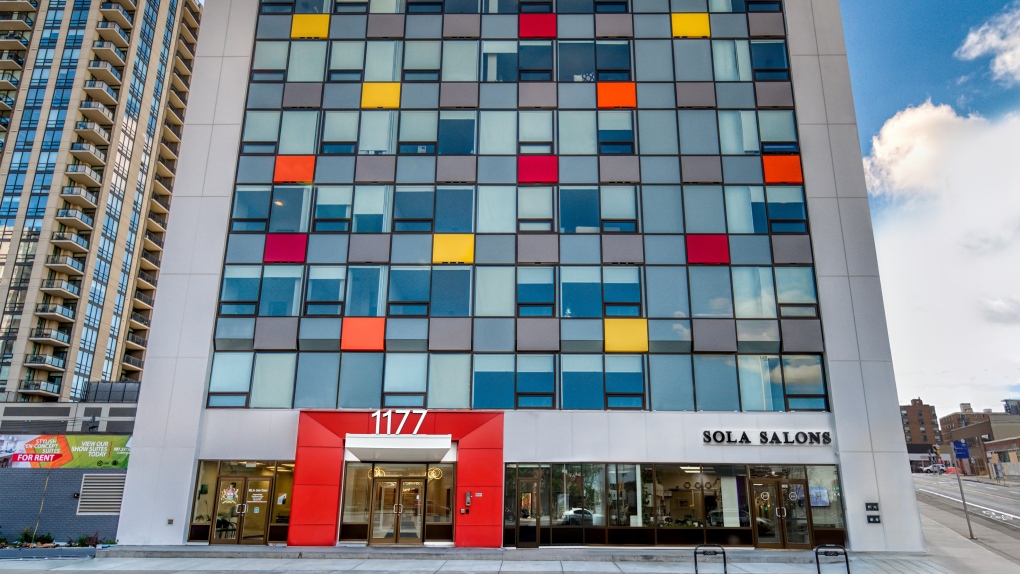 A photo from Strategic Group shows the exterior of the Cube housing development, which saw an empty office building in downtown Calgary converted into a residential building with 65 one- and two-bedroom apartments. (Strategic Group)

The COVID-19 pandemic has generated significant short- and long-term changes to the way people live, play and, especially, work.

While some aspects of pre-pandemic life – like socializing indoors without a mask and travelling – have made a comeback, offices across the country have yet to return to their pre-pandemic occupancy rates.

Whether companies will abandon the remote and hybrid workplace models that became popular during the pandemic is to be determined. But two things are clear: Office vacancy rates have been rising since the beginning of the pandemic and office-to-residential conversions are becoming more common in mid-size and large Canadian cities.

In its latest National Market Snapshot, investment management company Colliers took stock of office vacancy rates in 12 Canadian cities during the third quarter of 2022. According to the report, the average office vacancy rate across Canada is 13 per cent, compared to just over 8 per cent at the start of the pandemic.

Penny Gurstein is a professor at the University of British Columbia’s School of Community and Regional Planning who specializes in real estate and housing. She believes what’s happening is the acceleration of a trend that began before the pandemic.

“I think COVID really just sped up the trend toward more flexible working arrangements that’s been going on for a while,” she told CTVNews.ca in an interview over the phone on Wednesday. “Businesses that are trying to attract a younger workforce have recognized that something their employees want is more flexibility, so they don’t need as much office space.”

As office vacancy rates creep, building owners, developers and city planners are increasingly warming to the idea of converting empty and outdated office spaces into homes. This saves them from needing to demolish and rebuild underused assets, and fills demand for housing.

This concept isn’t new either.

For decades, developers have transformed banks, schools, factories and churches into condominiums and apartments, and there are several examples of office conversions in Canada prior to the pandemic.

An advantage of repurposing existing buildings is that it reduces some of the environmental impact of construction. Between three office-to-residential conversion projects completed since 2019 and an upcoming fourth project, Alberta-based Strategic Group estimates it will have saved 56,000 tonnes of building materials and 17 tonnes of carbon dioxide emissions. 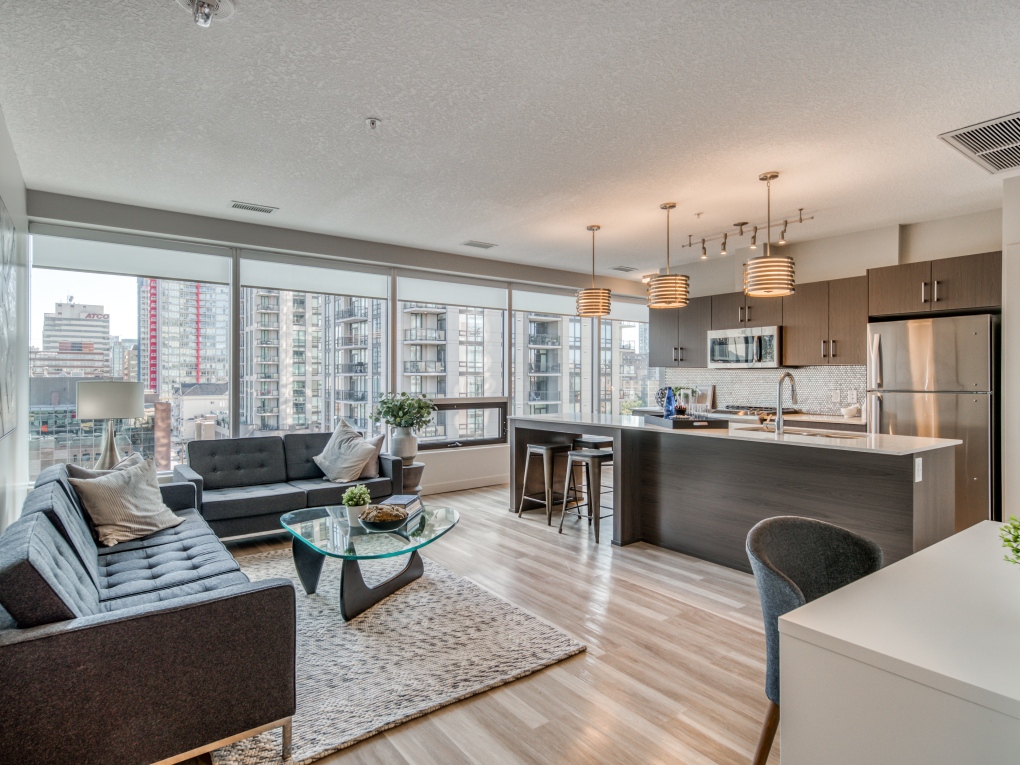 A photo from Strategic Group shows the kitchen and living room of a unit in the Cube housing development, which saw an empty office building in downtown Calgary converted into a residential building with 65 one- and two-bedroom apartments. (Strategic Group)

“That’s the equivalent of taking 37,000 vehicles off the road each year,” Ken Toews, Strategic Group’s senior vice president of development, said in a phone interview with CTVNews.ca on Wednesday.

Toews explained that construction accounts for 11 per cent of global climate emissions, according to the World Green Building Council, so part of the appeal of repurposing existing buildings is to help bring that number down.

Of course, there are also financial considerations.

Once a building’s vacancy rate creeps up to 20 per cent, it starts to lose money, explained Steven Paynter, principal at Gensler Architecture and Design.

“There’s a lot of buildings at that point now,” he told CTVNews.ca in a phone interview on Wednesday. “In the last six months, as the vacancy rates have climbed up and people are not renewing their office leases, all of a sudden everyone wants to talk about it and wants to get these projects moving.”

Gensler saw this coming at the beginning of the pandemic and created a scoring system to help developers determine which buildings are well suited for conversion and which aren’t.

Buildings with a small floor plate are ideal because it’s easier to design residential units in a space with an elevator-to-window depth of around 35 feet than, for example, 80 feet. Buildings from the 1970s tend to have these smaller floor plates. Buildings with plenty of windows and pre-existing parking are also an asset, since it’s difficult and costly to retrofit these features.

“We’ve done a lot of work on this,” Paynter said. “We’ve studied over 350 buildings around North America now, and what we’ve found is, if you’re lucky. About 30 per cent of the time these projects will make economic sense.”

Nevertheless, Paynter expects to see office-to-residential conversions in every major North American city before long, though it’ll take more time to happen in some cities than others, mostly due to municipal zoning and approval policies.

Cities need to approve applications for office-to-residential conversions, and some cities have zoning rules that protect office space. For example, Paynter said Toronto has designated employment zones where the amount of office space is protected. This adds another barrier to making conversions.

“At the moment it’s hard to do these types of conversions in Toronto because of the city rules,” Paynter said.

The federal Liberals are aware of this barrier, and in the 2021 election, campaigned on a promise to commit to $600 million to support office- and retail-to-housing conversions, and to work with municipalities to create a fast-track system for permits to allow faster conversions.

Paynter said he hasn’t noticed any movement on those promises yet, but in the meantime, some municipalities have taken up the mantle.

Through its Downtown Calgary Development Incentive Program, the City of Calgary offers a grant for office-to-residential conversions of $75 per square foot. The program launched in August 2021 and has approved five conversions, with two more likely to receive approval soon.

Calgary has also made progress speeding up the zoning approval process for office-to-residential conversions, said Toews.

Since 2019, Strategic Group has completed three office-to-residential conversions in Edmonton and Calgary, creating more than 200 new residential units, and is about to break ground on a fourth. 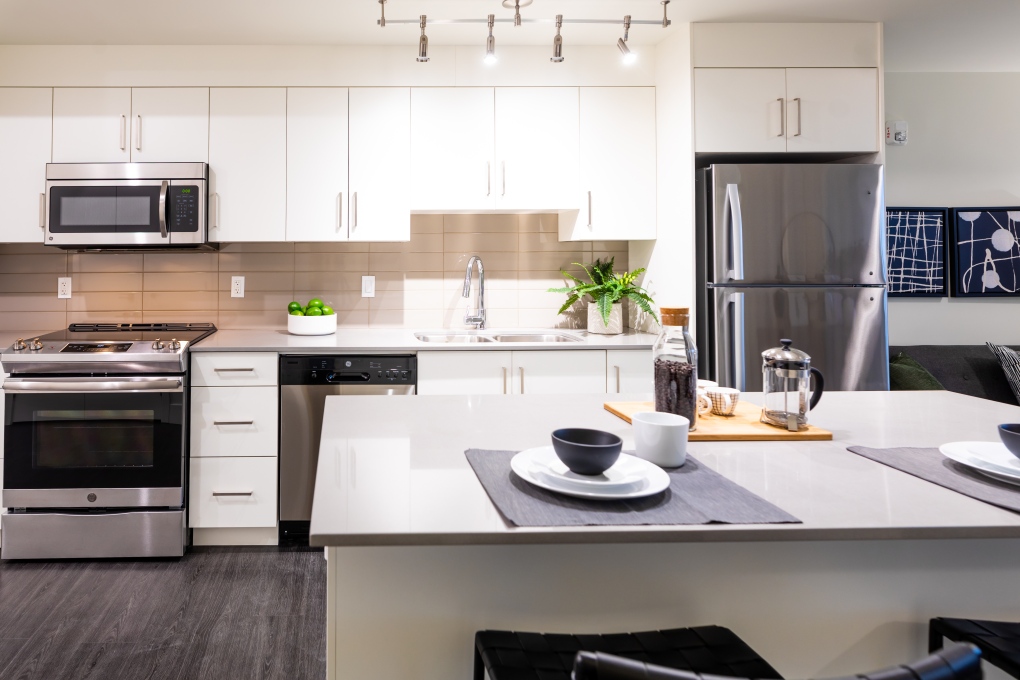 A photo from Strategic Group shows the kitchen of a unit in the e11even housing development, which saw an empty office building in downtown Edmonton converted into a residential building with 177 rental units. (Strategic Group)

“We’ve been pretty excited about conversions for quite a while,” he Toews said. “I knew we were on the right track when we were working on adaptive reuse for buildings, but I didn’t realize it was that big a deal.”

Toews said it took only a month to receive zoning approval for one of its Calgary conversions.

“It’s pretty cool,” he said. “Calgary has taken a different approach and it’s refreshing because a lot of developers get disenchanted with low approvals.”

Calgary's city council sees office-to-residential conversions as a solution to excess office space and a way to develop more vibrant downtown neighbourhoods. The federal government sees them as an opportunity for property owners and communities to trade excess space for market-based rentals.

Gurstein sees them as a potential opportunity to create affordable housing, one she hopes won’t be wasted.

“If they ensure at least some affordable units geared-to-income, those kinds of things, I think that’s totally reasonable,” she said.

“But unless there is sort of something in place to ensure there would be affordability in there, I don’t really see it as addressing affordability.”