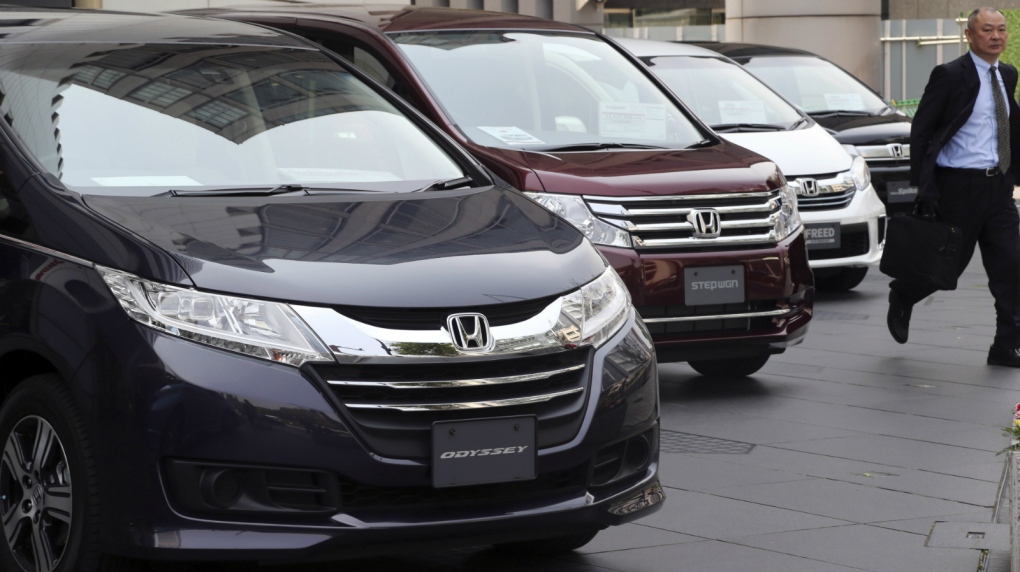 A man walks past Honda models on display at Honda Motor Co. headquarters in Tokyo on April 25, 2014. (AP / Koji Sasahara)

TOKYO -- A massive new recall from Honda of vehicles with Takata air bags Thursday has brought the total recalls for the potentially deadly devices to more than 33 million.

Honda Motor Co. recalled an additional 4.89 million vehicles around the world for a new type of problem in Takata Corp. air bag inflators, a day after Japanese rivals Toyota and Nissan announced similar recalls. The new wave of recalls adds to what was already one of the largest recalls ever for a defective part.

Honda has been the automaker hardest hit by the recalls. With Thursday's announcement, the air-bag recalls have hit 19.6 million Honda vehicles.

In the latest problem, a leak can happen while the vehicle is in use, causing a rupture, and the air bag could explode, according to Honda. The earlier recalls were for exploding air bag inflators that stemmed from defects during production of the air bags.

The cause of the defect is not yet pinpointed. Automakers, Takata and the U.S. National Highway Traffic Safety Administration, the transport authority in the U.S., are investigating.

No North American vehicles are affected by the latest Honda recall. Some 1.72 million vehicles, for the 2004 through 2008 models years, were recalled in Japan. Other regional breakdowns were not immediately available.

No injuries have been reported related to the latest problem, Tokyo-based Honda said.

In the U.S., NHTSA, which oversees recalls, as well as Takata and the auto industry, have been trying to pinpoint what's causing the inflator problems, which surfaced about a decade ago.

Takata has been fined $14,000 per day by NHTSA since Feb. 20 for allegedly dumping documents on the agency without the legally required explanation of what's in them. The fines have reached about $1 million.

Takata has denied it is not co-operating fully with the investigation.

Recall repairs have been slow to happen. Takata has had difficulty keeping up with demand for replacement inflators. As of last month, Honda said it had fixed 19 per cent of the recalled inflators. Some of the recalls date to 2013.

Takata supplied other automakers, including Ford Motor Co, BMW and Chrysler AG. At least six people have died worldwide due to the defect for which the original Takata recalls were carried out. Before before the latest recalls, 10 automakers recalled 22 million worldwide because of the Takata air bag problem.

Also Thursday, Honda announced a global recall for 47,800 Acura and other model vehicles for a defect in the radar system designed to make cars safer to drive by stopping automatically before crashes.

There has been one reported accident for this problem, in which a radar system in a Honda vehicle on a Tokyo street mistakenly thought a vehicle was approaching and automatically braked, causing the vehicle behind to crash into its rear bumper. No one was injured, Honda said.