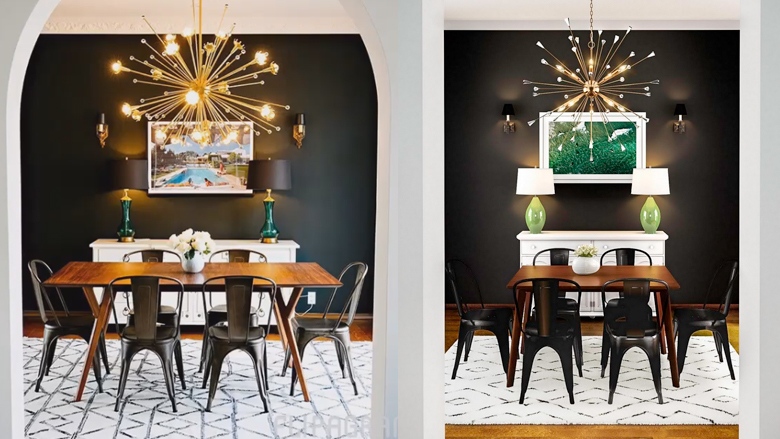 The photo of the dining room on the left was created by Jack Ryan Design. The image on the right was posted on the Home Depot website.

A Kansas blogger said she was browsing Pinterest last Friday evening when a beautiful room caught her eye. When she clicked on the image she was directed to the room inspiration page for Home Depot in the U.S.

As she started scrolling through the digitally rendered images of decorated rooms, Jeannine Dean noticed a laundry room that looked familiar to her because she had seen it before from California-based designer Jenna Sue, who works exclusively with Lowe’s.

“I thought it was odd that her stuff was on the Home Depot website,” Dean told CTVNews.ca during a telephone interview from Oklahoma on Wednesday.

In Sue’s photo, the laundry room included a white farmhouse sink, wooden countertop, grey cabinets and a sliding dark brown barn door with a wreath hanging on it.

In the image Dean saw on the Home Depot website, the laundry room also had a white farmhouse sink, wooden countertop, grey cabinets and a light brown barn door with no wreath hanging on it.

Dean sent Sue a link to the Home Depot version and asked her if she knew anything about it.

“She got right back to me and said she’d never seen it before and didn’t give consent for it and had no idea why it was on there,” Dean recalled. “She was quite upset about it.”

Following this initial discovery, Dean did some more digging and discovered dozens of images of rooms that had been digitally created by Home Depot that she believed to be “rip offs” of rooms designed by various social media influencers.

“It was just so obvious that they’re copies,” Dean said. “It was easy to figure out who the designer was.”

Dean uploaded a series of photos comparing the works of the designers and the images on the Home Depot page on her Instagram Stories.

The comparison photos Dean posted on Instagram sparked an uproar in the online design community.

“They are taking original creative images and computer altering for their own products and profits without the owner of the images’ consent,” one Instagram user said.

“Home Depot is copying interior designers’ work through the use of computer generated renderings. Stealing their designs and replacing certain elements in the room with Home Depot products,” another designer wrote.

In one example, according to Toronto-based interior designer Allison Willson, a nearly exact replica of a kitchen she created in 2014 was posted on the Home Depot website.

The light gray cabinetry, the tiled backsplash, and the gold faucet above the sink appear to be almost identical in the two images.

“It’s insane. They literally copied my bowl of chestnuts!” Willson told CTVNews.ca from Toronto on Wednesday. “I was upset. It feels like plagiarism in a way.”

Willson said she was never contacted by the U.S. home improvement store for permission to use the design or offer compensation.

Willson is far from the only designer who is upset.

Monika Hibbs, a popular lifestyle blogger from Langley, B.C., said three of her rooms were ripped off by Home Depot, including a laundry room, kitchen, and bathroom. She said there is no denying the similarities between the two images when they’re viewed beside each other.

It’s not just the actual furniture or decorations in the rooms, either, Hibbs explained. The photographs themselves are framed and composed in the same way in nearly all of the examples.

Hibbs said she was surprised that Home Depot hadn’t reached out to her to collaborate on the designs because she had recently worked with the U.S. team over the holidays on another project.

“I think at the end of the day, asking permission and arranging some sort of contract, that’s just how it goes, and they [Home Depot] know that,” Hibbs told CTVNews.ca on Wednesday. “This is not new to their company or any other company.”

The blogger said she contacted Home Depot on Instagram and was told the company has been made aware of the complaints and is working on finding a resolution.

After CTVNews.ca contacted Home Depot in the U.S. on Wednesday morning, the images of the rooms in question were taken down from the website by the early afternoon.

Margaret Smith, a spokesperson for the retailer, also issued a statement regarding the controversy.

“We've looked into this and found that there were issues with the use of images for inspiration and creating content. We apologize, and we're removing the images and reviewing our process to help ensure this doesn't happen again,” the statement read.

“We want to generate good relationships with these industry experts and we truly respect their talent.”

Toronto interior designer Meredith Heron, who expressed her outrage in solidarity with the other designers, said sharing other content creators’ work without credit is a widespread problem in the industry.

“The trend with influencers right now and people on Instagram in general is -- and this is where I think we can all share a little bit of blame -- is people will post pictures and not credit whose work it is,” she said.

Heron, whose work was not recreated by Home Depot, said this can be detrimental to a designer’s reputation because their work can be associated with brands they don’t necessarily want to be connected to, which undermines the exclusivity of their designs.

“I feel for your client who then sees their project also knocked off,” she said. “[It] puts that designer in potential jeopardy with their client in terms of ongoing referrals and repeat work.”

Willson said the availability of images through social media has made it more difficult for creators’ to retain ownership of their work.

“It’s just too bad that we’re in a situation where with technology you can ultimately recreate something that is someone else’s and it’s OK,” she said.

Hibbs said she hopes what happened will be a learning experience not only for big companies like Home Depot, but for the social media community and followers as a whole.

“It is a big deal,” she said. “People use images and repost people’s images all the time without credit. It’s too many to count.”