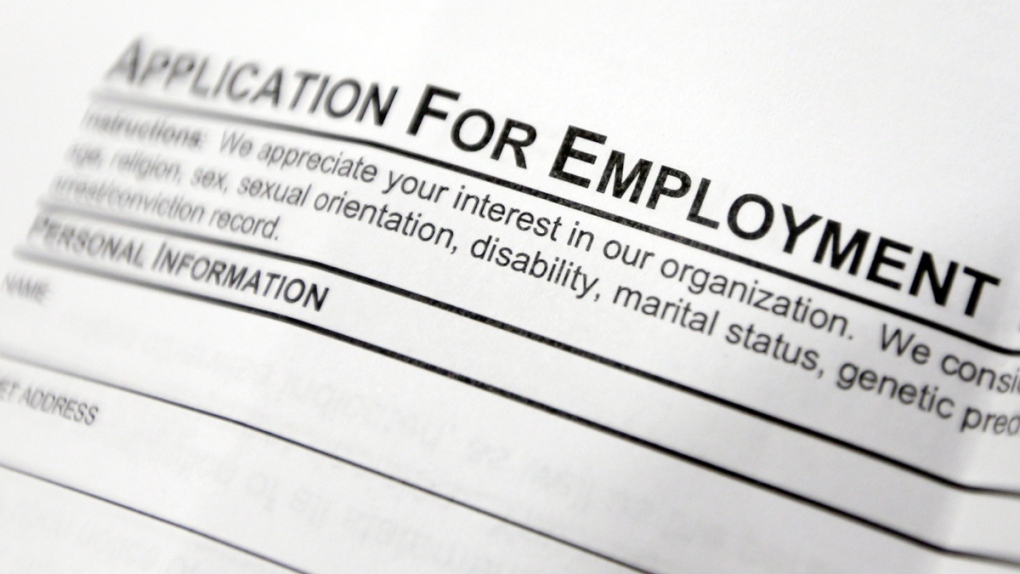 This April 22, 2014 photo shows an employment application form sits on a table during a job fair at Columbia-Greene Community College in Hudson, N.Y. (AP / Mike Groll)

OTTAWA -- The hiring and investment intentions of Canadian companies have dropped to their lowest levels since 2009 as the fallout from sliding commodity prices seeps beyond resource-rich regions, a new survey has found.

Companies are anticipating a darker road in 2016 with many facing "significant challenges" tied to the commodity- and energy-price plunges, according to the Bank of Canada's latest business outlook survey.

"The negative effects of the oil-price shock are also increasingly spreading beyond the energy-producing regions and sectors," the central bank said in the quarterly report released Monday.

"For example, many businesses across the energy supply chain continue to struggle as they adjust to an environment of weak demand."

As a result, the poll found fewer firms expected to boost their staff levels over the next 12 months, while plans to cut employees were more "widespread." Many of the companies anticipating employment declines this year mentioned the need to cut costs, the survey said.

These hiring intentions dropped to their lowest level since the 2009 recession, the Bank of Canada said.

Companies also predicted the weaker 2016 outlook to affect their investments in equipment and machinery. Many planned to curb spending to repair and replace existing equipment and, compared to recent surveys, the bank said there were fewer projects expected to expand production.

The survey's interviews were conducted between mid-November and early December, before oil prices and the dollar slid even further.

The resource-dependent economy hobbled through 2015, a year that saw economic growth go in reverse over the first two quarters.

The public purse has also taken a major hit from the price slide. The federal government has downgraded the country's fiscal outlook for the coming years, removing billions from the bottom line.

The business survey, however, said exporters remained optimistic their sales will benefit from strengthening foreign demand over the coming year, particularly amid widespread expectations of growth in the U.S. economy.

The questionnaire also found that some firms believe the lower dollar will boost foreign sales and tourism-related business. But at the same time, the cheaper loonie hikes up the costs of products and services that companies need to import from outside Canada.

The survey results were the most important piece of information ahead of the Bank of Canada's upcoming decision on its trend-setting interest rate, Leslie Preston of TD Economics wrote Monday in a research note to clients.

"Unfortunately it does not paint a very positive picture about hiring or investment over the next 12 months," she wrote.

"Market speculation for another cut by the (Bank of Canada) has increased since the release."

But Preston noted the survey remained consistent with the theme of governor Stephen Poloz's speech last week, in which he described Canada's hurdles as a difficult adjustment to low commodity prices.

She said another rate cut on Jan. 20 would be premature with the effects of the central bank's two 2015 reductions still working their way through the system.

BMO chief economist Doug Porter wrote in a client note that he fully expects the Bank of Canada to sound more cautious when it makes its policy announcement.

"The question is whether they are prepared to act on that caution just yet," Porter wrote.

He said he didn't think the bank would move its benchmark this month, but noted the market is now fully priced for one rate cut before the end of 2016.

In his speech last week, Poloz said that no simple policy response will fix the problem of falling commodity prices. The sometimes-painful economic forces underway must work themselves out, he said.

Poloz also said that divergence, when it comes to monetary policy, has become a dominant theme as different world economies face their own obstacles. His remarks came only a few weeks after the U.S. Federal Reserve raised its key interest rate for the first time since before the financial crisis.

He also reiterated last week how the Bank of Canada has several unconventional tools it can use to limit any significant threats to the financial system or inflation. Among them is the bank's ability to lower the key rate into negative territory, if necessary.

On Monday, the Bank of Canada also released the results of its latest senior loan officer survey, which focuses on business-lending practices over the final three months of last year.

It found that overall lending conditions had become more difficult for firms during the fourth quarter. Meanwhile, overall demand for credit was roughly unchanged.