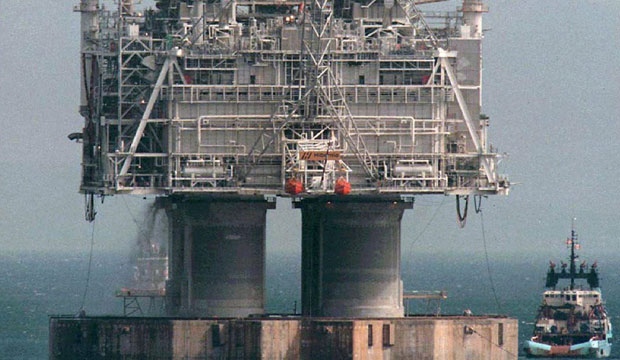 A tug positions itself near the base of the Hibernia platform in Bull Arm, Trinity Bay, Nfld., Thursday May 22, 1997. (CP PICTURE ARCHIVE/Jonathan Hayward)

ST. JOHN'S, N.L. - Oil production is temporarily shut down on the Hibernia oil platform off Newfoundland's east coast after about 12,000 litres spilled out of a storage container into the ocean.

A report on the website of the Canada-Newfoundland and Labrador Offshore Petroleum Board says the oil sheen resulting from the spill was seen on Wednesday.

Scott Sandlin, president of the Hibernia Management and Development Company, says the oil producer has decided to close the facility until the spill's cause is investigated and measures taken.

The company says it has been mechanically dispersing the mix of oil and water as well as using absorbent booms to soak up discharge from the ocean surface.

Hibernia's release says the spill happened "during routine activities related to removing water from one of the storage cells."

The platform is owned by a consortium of oil companies, with the largest partner being ExxonMobil.