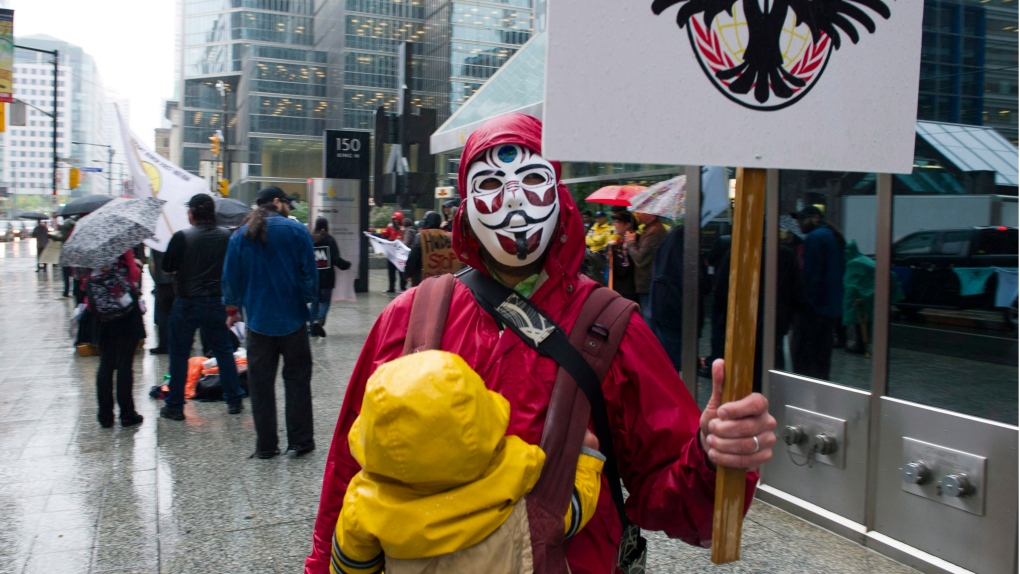 Protesters stand in the rain outside Hudbay's annual general meeting in Toronto, on Friday, May 10, 2013. (THE CANADIAN PRESS/Frank Gunn)

TORONTO -- A court in Guatemala has acquitted a former security guard for a Canadian-owned mining company of murdering an indigenous activist and leaving another paralyzed in a ruling that comes amidst a landmark lawsuit in Canada, lawyers for the plaintiffs say.

At the time of the incidents in 2009, Mynor Padilla was head of security for a mine owned by Toronto-based Hudbay Minerals.

The widow of Adolfo Ich, the wife of the paralyzed man and 11 other indigenous Mayan Q'eqchi are suing Hudbay in what observers have called a precedent for holding multinational mining companies liable in their home countries for alleged abuses at mines they operate abroad.

Toronto lawyer Murray Klippenstein, who represents Ich's widow, said the acquittal was not unexpected given a justice system in the central American country that Human Rights Watch and others have denounced as rife with "rampant" corruption.

"Seeking justice there is, sadly, hopeless, especially against large international corporate interests like Hudbay," Klippenstein said in a statement. "It is common for judges to be bribed, witnesses threatened, and powerful interests protected."

As a result, Klippenstein said Canadian courts offer the best hope for justice against Hudbay.

The company has said the claims in the lawsuit have no merit and that it has been falsely accused of displaying a pattern of human rights and even environmental abuses.

"We always believed in Mr. Padilla's innocence and we are happy for him and his family," Hudbay spokesman Scott Brubacher said in an email. "We look forward to the resolution of the lawsuits in the Ontario court."

Padilla, a former ranking member of the Guatemalan military, was arrested almost three years after Ich's death even though a warrant for his arrest was issued soon after. He remained on the payroll of Hudbay's Guatemalan subsidiary until he was taken into custody but it would take another three years to stand trial, which lasted a further two years.

Prosecutors at the trial, which mostly took place behind closed doors, argued Ich's killing was not just a murder but rather an assassination. They cited forensic evidence that he had been attacked with a machete and shot in the head at close range.

The judge in the case ordered Padilla released, and also requested criminal charges against most of those involved in the prosecution -- including victims of the violence, witnesses and even a prosecutor -- Klippenstein said.

The court said it would release reasons for its decision later this month.

"This apparent initiation of criminal charges against the victims and the prosecution is alarming and borders on the truly bizarre," Klippenstein said. "It seems to us that this turns justice on its head by attempting to convert victims into criminals, and justifies and amplifies the serious consensus international concerns about the dysfunctionality of the Guatemalan justice system."

In a statement, Ich's widow Angelica Choc said she and the others would continue to pursue Hudbay Minerals in Canada.

An Ontario court ruled in 2013 that the lawsuit could proceed. Hudbay has recently turned over thousands of internal corporate documents to the plaintiffs, which their lawyers are now reviewing, Klippenstein said.

A year ago, the New York Times ran a front-page story that outlined the lawsuit against Hudbay Minerals which alleges shootings and gang rapes at a mining project once owned by the company.