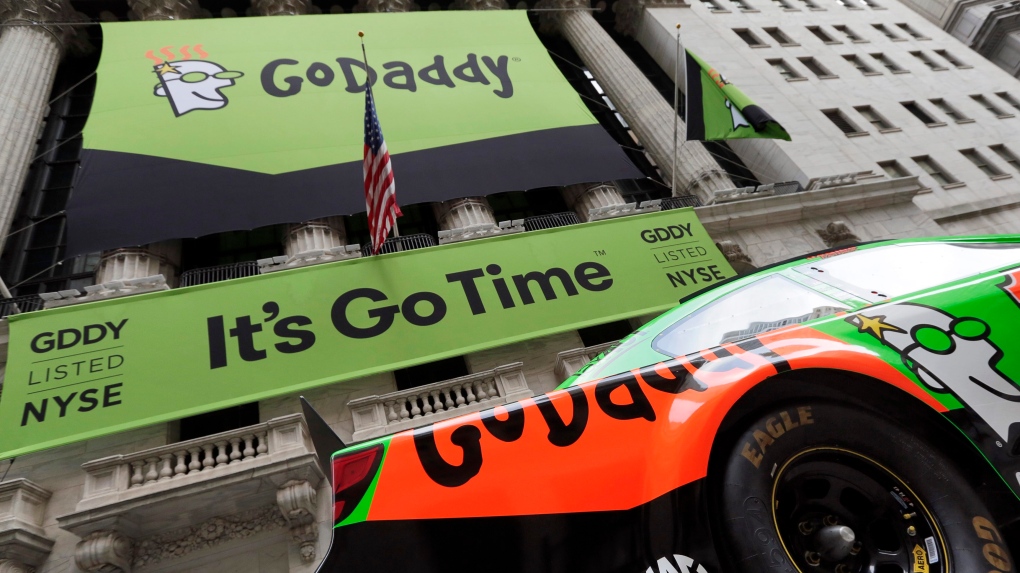 In this April 1, 2015, file photo, GoDaddy signage and a race car announce the company's IPO, in front of the New York Stock Exchange in New York. (AP Photo/Richard Drew, File)

A leading neo-Nazi website continued to be accessible Monday despite efforts by website registration companies Google and GoDaddy to oust it after it mocked the woman killed in a deadly attack at a white nationalist rally in Virginia.

Google said Monday that it was cancelling the domain name registration of The Daily Stormer for violating its terms of service. The registration had moved there after GoDaddy tweeted late Sunday night that it had given The Daily Stormer 24 hours to move its domain to another provider, also because the site had violated the Scottsdale, Arizona-based company's terms of service.

GoDaddy spokesman Dan Race said the move was prompted by a post on the site about Heather Heyer, who was killed Saturday when a car plowed into a group of demonstrators in Charlottesville. The post, written by The Daily Stormer's publisher Andrew Anglin, called her "fat" and "childless" and said "most people are glad she is dead, as she is the definition of uselessness."

"Given their latest article comes on the immediate heels of a violent act, we believe this type of article could incite additional violence, which violates our terms of service," Race said in an emailed statement.

Shortly after GoDaddy tweeted its decision, the site posted an article claiming it had been taken over by hackers associated with "Anonymous" and would be shut down, and it was briefly down Monday before becoming accessible again.

One of The Daily Stormer's contributors said the post about the site being taken over was just a prank.

"We're a convivial publication. We have a lot of fun with it," said Andrew Auernheimer, a notorious hacker and internet troll who writes for the site.

Auernheimer, known online as "weev," said GoDaddy hadn't contacted The Daily Stormer to explain its decision. He said the site has an alternate domain name that it can use if GoDaddy cancels its service.

"We'll get it taken care of," Auernheimer said. "If we need a new domain, we'll get a new domain."

GoDaddy isn't The Daily Stormer's host, which means the site's content isn't on the company's servers, according to Race. "Only the domain is with GoDaddy," Race added.

However, cancelling a domain name has the effect of making a website unreachable, regardless of where it's hosted.

The Daily Stormer is infamous for orchestrating internet harassment campaigns carried out by its "Troll Army" of readers. Its targets have included prominent journalists, a Jewish woman who was running for a California congressional seat and Alex Jones, a radio host and conspiracy theorist whom Anglin derided as a "Zionist Millionaire."

In April, a Montana woman sued Anglin after her family became the target of another Daily Stormer trolling campaign. Tanya Gersh's suit claims anonymous internet trolls bombarded Gersh's family with hateful and threatening messages after Anglin published their personal information in a post accusing her and other Jewish residents of Whitefish, Montana, of engaging in an "extortion racket" against the mother of white nationalist Richard Spencer.

The Daily Stormer used a crowdfunding website, WeSearchr, to raise more than $152,000 in donations from nearly 2,000 contributors to help pay for Anglin's legal expenses.

Other internet services have taken similar action against The Daily Stormer since Anglin founded it in 2013. In 2015, Anglin said PayPal had permanently banned him from using the service. And he complained in January that a Ukrainian advertising company had banned them, leaving an Australian electrician as the site's only advertiser.

Defiant Trump renews criticism of 'both sides' in protest