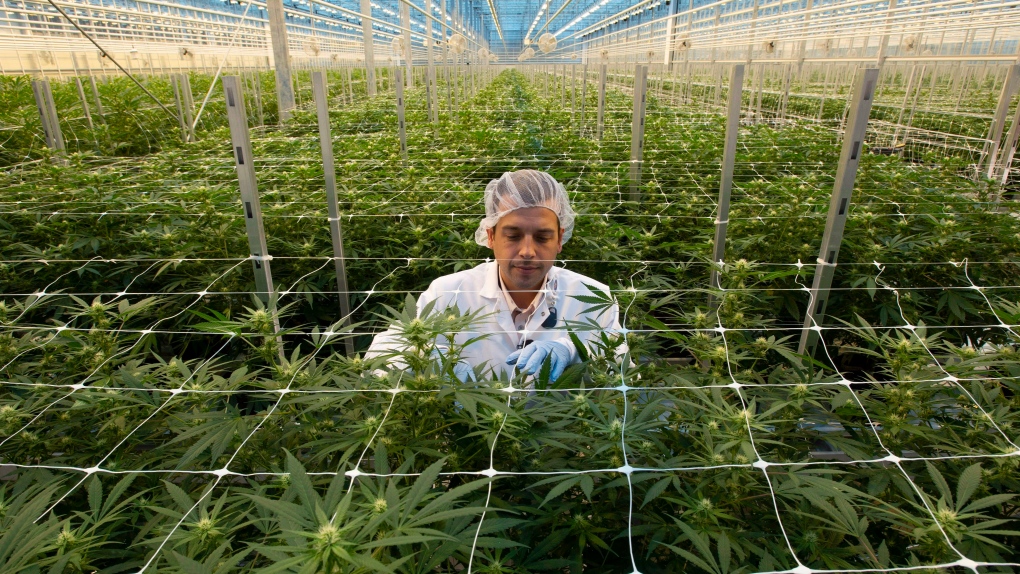 A Hexo Corp. employee examines cannabis plants in one of the company's greenhouses, seen during a tour of the facility, Thursday, October 11, 2018 in Masson Angers, Que. THE CANADIAN PRESS/Adrian Wyld

Six months after cannabis was legalized in Canada, many of the people who entered the sector in search of a financial windfall appear ready to turn their attention elsewhere.

“We’re very bullish on the globe, on the U.S. -- not so much on Canada,” Loren DeFalco said Tuesday at a cannabis investors’ conference in Toronto.

DeFalco is a partner at CB1 Capital, a cannabis-focused investment advisory company based in New York. His sentiments were echoed, in whole or in part, by many other industry insiders speaking at the GMP Securities 2019 Global Cannabis Conference.

Reasons cited for the pessimism around Canada included advertising restrictions making it difficult to build a popular brand, consumers being unsure where to find trustworthy knowledge about cannabis and the slow rollout of retail distribution in Ontario and B.C., which has left many Canadians with no easy access to a physical cannabis store.

Igor Gimelshtein, a former CFO of licensed cannabis producer MedReleaf, noted that MedReleaf was sold to Aurora Cannabis last summer in part because of concerns about “convenience, availability and price,” and some of the prior owners then redirected their investments toward the U.S. market.

Aurora, for its part, is also forging ahead with international expansion, recently announcing plans to enter the Danish and German markets.

A mildly dissenting view came from Jason Wild, president of JW Asset Management. Wild said he did not agree with the “anti-Canada” sentiment of other investors, noting that existing “multi-billion-dollar Canadian companies” will likely be big players in the U.S. market as more states legalize cannabis.

“My view is that there is a lot of opportunity in Canada,” he said.

Still, Wild’s firm started making acquisitions in the U.S. in 2018 after four years of focusing on Canada, seeing opportunity in America’s much larger population.

“The U.S. is ... the biggest and best market in a lot of industries, and I think in the cannabis industry it is,” he said.

Miles Light, a University of Colorado economist who works with the Marijuana Policy Group research firm, estimated that the legal cannabis framework is only capturing 19 per cent of the total demand for cannabis in Canada -- a number he predicted to rise to 41 per cent by 2020.

“Canada has a large black market, because there’s a large distance between the consumer and the store,” he said.

Even Canadian cannabis companies, while touting their plans for their home market, were virtually unanimous in citing global expansion as a key element of their growth plans.

“I think the U.S. is really the most interesting market today, and I saw that from the perspective of a licensed Canadian producer ... with one of the largest market shares in the country,” Hexo Corp. CEO Sebastien St-Louis said.

Gatineau, Que.,-based Hexo is a relatively large player in the Canadian cannabis market. It is hoping its partnership with Molson Coors and recent $263-million acquisition of Newstrike Brands Ltd. will help boost its profile and its returns. In addition to its interest in the U.S., it is growing medicinal cannabis in Greece -- which gives it an entry point into the European Union market -- and Latin America.

European expansion is also on the mind of Valens GroWorks Corp., which focuses on cannabis extraction and aims to be a major player on the world stage. Everett Knight, the company’s executive vice-president of strategy and investments, said Valens is targeting five European nations in particular.

“If you look at the global marketplace ... it’s big. We’re just in the second inning,” he said.

Some analysts, though, question whether the reality of the European market will match up to the dollar-sign projections that have Aurora, Hexo and Valens so eager to get a slice of the pie.

Light noted that The Netherlands has only a small fraction the reported marijuana sales of Colorado, despite having about triple Colorado’s population.

“When you look at the facts of what the demographics are and what the prevalence is, they don’t add up to very much money,” he said.

“The United States is, I think, the best market to be investing in by far.”