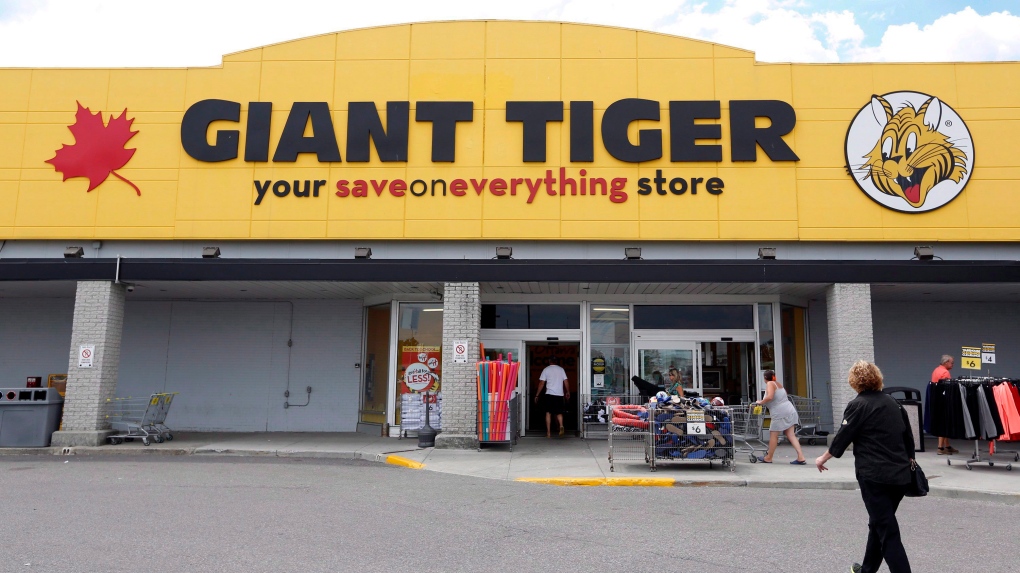 A newly-renovated Giant Tiger store is shown in Ottawa on Thursday August 4, 2016. (THE CANADIAN PRESS/Fred Chartrand)

Giant Tiger Stores Ltd. is planning to expand its footprint as demand for discount products surges amid the pandemic.

The retailer has plans to increase its store count to 300 across the country, up from its current 259 locations, and is investing upgrades for both e-commerce and stores.

"Our bricks and mortar coverage of the country still trails the pack a little bit," said Paul Wood, a veteran company executive who was appointed president and CEO of Giant Tiger last fall.

But the company will be selective in terms of where it opens new stores, he said.

"As a private company, we make our decisions based on what's best for the long-term profitability and success of the company," Wood said. "The absolute number that we open in any given year is dictated by opportunity -- not trying to hit a specific target."

Industry watchers say Giant Tiger sits in a sweet spot between competitors, offering a more convenient layout than a big box store but a wider selection than a dollar store.

They say the store's format and product mix has been especially appealing to shoppers during the pandemic, when many consumers are looking to save money.

"They have an interesting price point that is above Dollarama but below Walmart," retail analyst Bruce Winder said.

The retailer has also managed to outlast many other Canadian discounters that have come and gone, such as Bargain Harold's and BiWay.

"There used to be a few chains that offered that mid-discount price point, call it $10 and up, and Giant Tiger seems to have a monopoly in that area now," Winder said.

The retailer's first store was opened by founder Gordon Reid in Ottawa's Byward Market in 1961. Giant Tiger now has 259 stores, roughly 10,000 employees and surpassed $2 billion in annual sales in 2018.

Stores with their bright yellow signage, bookended by a tiger's head and a red maple leaf, tend to be located in suburban communities, small towns and main streets.

"They're not typically in places where there is a lot of competition," said Lisa Hutcheson, managing partner at consulting firm J.C. Williams Group. "I think of them in markets where they would be one of the only players in those communities," she said.

That plays into the corporate brand, Hutcheson said.

"They've always been about community, about family and about saving Canadians money and I don't think they've ever really deviated from that."

While historically the retailer has been a staple of Canada's small-town retail strips, Wood said that's changing.

"In more recent years, we've continued to expand into some pretty typical markets," he said. "We're in the same shopping node as our key competitors ΓÇª Walmart is within five kilometres of our stores in 90 per cent of our markets."

As Giant Tiger grows, the new stores will be based on value and opportunity, which could include urban centres, Wood said.

"We haven't put a presence yet in downtown Toronto, but we're in Mississauga, we're in Brampton, we're in Etobicoke, we're in Scarborough," he said. "It's about finding the right space at the right price where we can access a good number of shoppers and convenience is part of that.

Winder said it's that laser focus on value that has helped Giant Tiger survive where other discounters have failed.

"They've been very frugal and smart in terms of the way their stores are created and run," he said. "They're usually in sort of secondary or tertiary malls so they're not paying the big rents. The stores are cheap and cheerful, they're clean with nice signage, but basic, so that keeps their capital costs down."

Out of the company's 259 stores, about 100 are corporate owned -- a number the retailer hopes to whittle down.

"Ultimately, we'd like to have our stores locally owned and operated by a franchise owner. But because of the natural churn of opening new stores and people retiring and selling stores back we have an inventory of corporate stores that we're in the process of building out to be franchised," Wood said.

One of Giant Tiger's appeals is its product mix -- an assortment of groceries, housewares, apparel, beauty, outdoor gear and kids' toys and games.

"It's like a mini value department store," Hutcheson said. "You can sort of get anything there."

It's the grocery category that's given Giant Tiger the coveted essential retail status during the COVID-19 pandemic, allowing the stores to remain open throughout the lockdowns.

Shoppers engaged in panic-buying and pantry-loading last spring, but Wood said there has been an evolution in buying behaviour over the course of the pandemic.

"It was interesting to watch the customer's natural selection of what they deemed necessary or essential," he said, noting that the surge in grocery and cleaning supply sales gave way to items to keep children entertained.

However, with some provinces banning the sale of non-essential goods, Giant Tiger has had to rope off much of its inventory in some of its stores.

"From an execution standpoint, it became challenging to implement those kinds of things at store level," Wood said. "Sometimes the person on the front line unfortunately takes the brunt of the customer's frustration with those rules."

This report by The Canadian Press was first published May 10, 2021.