Ganja tours: How Jamaican marijuana farmers are cashing in on legalization trend 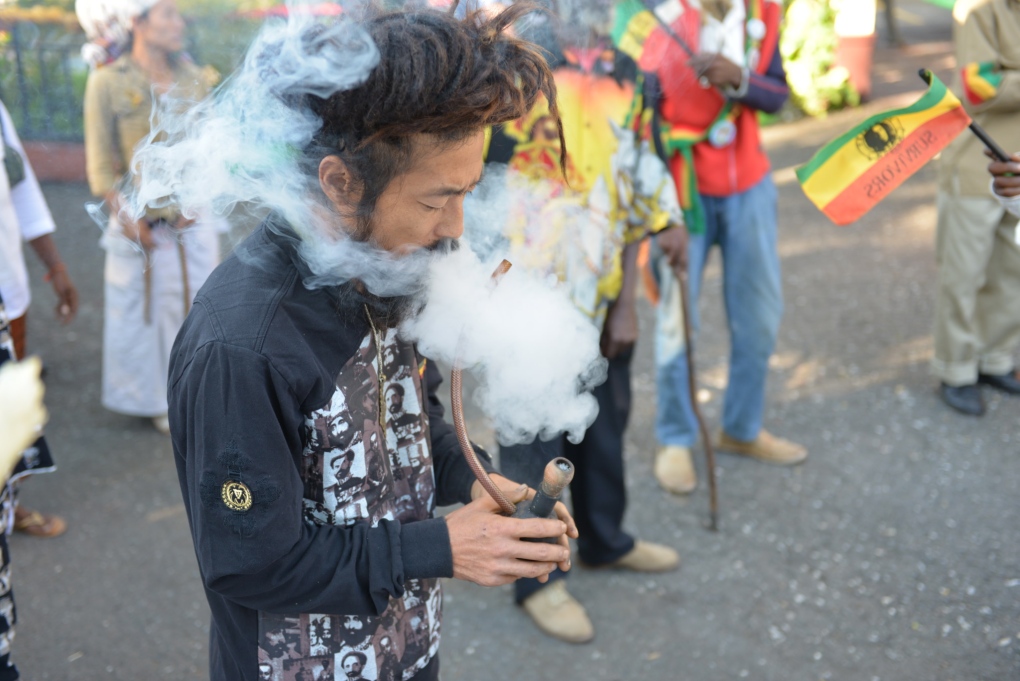 A Rastafarian named Bongho Jatusy smokes a pipe of marijuana outside a museum dedicated to the memory of late reggae icon Bob Marley in Kingston, Jamaica in this Feb. 6, 2013 photo. (AP / David McFadden)

NINE MILE, Jamaica -- Napa and Sonoma have their wine tours, and travellers flock to Scotland to sample the fine single malt whiskies. But in Jamaica, farmers are offering a different kind of trip for a different type of connoisseur.

Call them ganja tours: smoky, mystical -- and technically illegal -- journeys to some of the island's hidden cannabis plantations, where pot tourists can sample such strains as "purple kush" and "pineapple skunk."

The tours pass through places like Nine Mile, the tiny hometown of reggae legend, and famous pot-lover, Bob Marley. Here, in Jamaica's verdant central mountains, dreadlocked men escort curious visitors to a farm where deep-green marijuana plants grow out of the reddish soil. Similar tours are offered just outside the western resort town of Negril, where a marijuana mystique has drawn weed-smoking vacationers for decades.

"This one here is the original sinsemilla, Bob Marley's favourite. And this one here is the chocolate skunk. It's special for the ladies," a pot farmer nicknamed "Breezy" told a reporter as he showed off several varieties on his plot one recent morning.

While legalization drives have scored major victories in recent months in places like Colorado and Washington state, and the government of the South American nation of Uruguay is moving toward getting into the pot business itself, the plant is still illegal in Jamaica, where it is known popularly as "ganja."

Some would like to see that change, with increasingly vocal advocates saying Jamaica could give its struggling economy a boost by taking advantage of the fact the island is nearly as famous for its marijuana as it is for beaches, reggae music and world-beating sprinters.

"We will be reviewing the matter in light of the recent developments in this hemisphere," Golding said of decriminalization in an email.

The Ganja Law Reform Coalition, an island group that is calling for the government to decriminalize and regulate pot, is preparing to host an international conference in the capital of Kingston later this month, where topics will include prospects for cannabis commercialization.

Despite its laid-back international image, Jamaica is a conservative, religious place and many people bristle at the country's Rasta reputation.

Marijuana has been pervasive but prohibited on the island since 1913. The illicit marijuana crop has declined since the 1970s due to global competition and the U.S.-led war on drugs. Still, Jamaica is the Caribbean's leading supplier of pot to the U.S. and tourists often don't need to look any farther than their hotel lobby for assistance buying weed.

"There's already a high degree of marijuana tourism in Jamaica; they just don't call it that," said Chris Simunek, editor-in-chief of the magazine High Times, based in New York.

In Nine Mile, Breezy says Americans, Germans and increasingly Russians have toured his small farm and sampled his crop. There were no takers for the $50 tour on this morning among a couple of busloads of cruise ship tourists arriving at Bob Marley's childhood home, though more than a dozen lined up enthusiastically to buy baggies of weed from Breezy's friends, sold through a hole in the wall of the museum compound.

"I can get stronger stuff at home, but there's something really special about smoking marijuana in Jamaica. I mean, this is the marijuana that inspired Bob Marley," said a 26-year-old tourist from Minnesota. She identified herself only as Angie due to the fact the pot she was crumbling into a rolling paper is illegal both at home and in Jamaica.

An online vacation guide called Jamaicamax promises to organize ganja tours in the Negril area. But there's a caveat: First you have to smoke a marijuana "spliff" with your guide, presumably to show you are not law enforcement.

"After you smoke a spliff with us and we get to know you then we will take you on the best ganja tours in Jamaica and you'll smoke (and eat if you want) so much ganja you'll be talking to Bob Marley himself," the travel website says.

More than a decade after a government commission said marijuana was "culturally entrenched" and recommended decriminalizing personal use by adults, influential politicians and businessmen are pushing for Jamaica to cast off old fears of angering Washington and loosen up laws.

Henry Lowe, a prominent Jamaican scientist who helped develop a cannabis-derived medication to treat glaucoma in the 1980s, said the island could quickly become a hub of marijuana tourism and research. "People could come down to Jamaica for medical marijuana treatment and health tourism because this has been our tradition, our culture."

Indentured servants from India are thought to have brought the plant to Jamaica in the 19th century. Its use as a medicinal herb spread rapidly, with some people using ganja tea to alleviate aches and others using rum-soaked marijuana as a cold remedy. By the 1970s, marijuana became even more popular due to Rastafarian reggae stars like Marley and Peter Tosh.

For now, criminal gangs dominate the island's marijuana trade, and turf wars fueled in part by pot profits have long plagued gritty parts of Jamaica. But advocates say decriminalization or legalization would shift profits away from gangs, freeing money that now goes for arresting and jailing pot users.

For Breezy and his friends, any reforms couldn't come soon enough.

"The government needs to free up marijuana soon, man, because it's a natural thing, a spiritual thing," Breezy said before sticking his nose in a clump of pot plants and taking an appreciative sniff. "And the tourists love it."