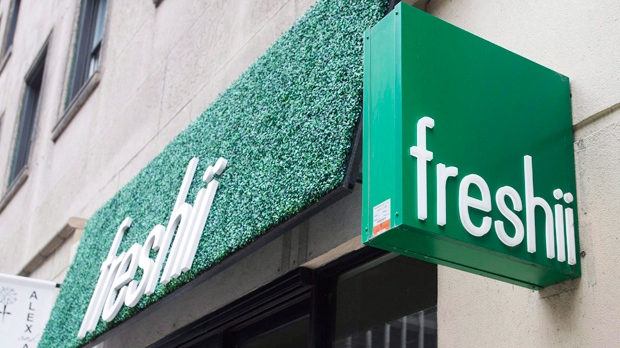 A Freshii restaurant is seen in Montreal on Tuesday, March 21, 2017. THE CANADIAN PRESS/Ryan Remiorz

Freshii Inc. shares plunged as much as 21 per cent Wednesday after the struggling eatery reported second-quarter results that missed analysts' expectations, despite assurances from the CEO that the company's three new hires would help it effectively execute future growth.

The restaurant chain's shares dropped to a low of $2.25 but closed down 19 cent or 6.6 per cent to $2.67 on the Toronto Stock Exchange, following a strong finish Tuesday after the company announced two new appointments to its senior leadership team. Freshii's shares jumped nearly eight per cent Tuesday, moving up 21 cents to close at $2.86.

Analysts had expected revenue of $5.85 million, and adjusted net income of $514,000 or two cents per share, according to financial markets data firm Refinitiv.

CEO Matthew Corrin, who has been open about the company's lacklustre performance, attempted to assure analysts the company's recent hires would help boost Freshii's results.

Freshii announced Tuesday that it had added two new members to its senior leadership team, William Schultz to the board of directors and Oliver Rodbard as vice-president of operations. Rodbard, who has more than two decades of retail and restaurant experience, will lead the company's restaurant operations.

The appointments were both new additions, rather than replacements or filling available vacancies, a company representative confirmed in an email.

"Adding this calibre of restaurant and retail experience and leadership to our senior team and at the board level, will serve us well as we map out and execute on our next stages of growth," said Corrin during a conference call with analysts.

Corrin has struggled to lead the young company through an ambitious growth plan that has resulted in weak sales performance, a situation he described as attempting to do too much at once. He's since revised anticipated store growth downward multiple times and then scrapped the guidance altogether.

Corrin, who founded the chain and opened the first store in 2005, recently took the unusual step of firing himself from the chief executive role only to rehire himself as a man with a new vision.

That vision includes a big focus on the eatery's menu, removing underperforming items and adding more packaged goods. Freshii is now also testing better-quality proteins, including chicken breasts, turkey meatballs and vegetarian options, at 30 locations. These proteins will cost more than the company's current offerings, Corrin said, but the price value ratio will be better.

The upgraded proteins, which are expected to roll out nationwide in the future, align with the company's desire to increase its share of dinnertime diners, said Corrin. It is testing so-called Freshii plates, which target the dinner crowd with one of the proteins, a quinoa or greens base, and a choice from several new sides, including a stuffed avocado or broccoli crunch.

Freshii is focusing on dinner at the expense of breakfast diners. The company's customers tend to embrace intermittent fasting -- a diet that encourages periods of refraining from eating -- and skip breakfast, Corrin said. Most Freshii customers who come in during breakfast hours purchase the company's daily juice cleanse, which offers several juices to consume throughout the day. The company believes it can build out that daypart eventually, but for now is focusing on lunch and dinner, Corrin said.

Despite the "new" CEO, announced at the previous quarterly call, results continued to underperform.

System-wide sales totalled $49.6 million in the quarter, up from $46.3 million a year ago, boosted by an increase in the number of stores. Same-store sales dropped four per cent, or three per cent if the impact of the timing of the Eastern holiday is taken into account.

The company opened 13 new stores in the second quarter and closed five.