France's most famous condiment is running out

France's most famous condiment is running out 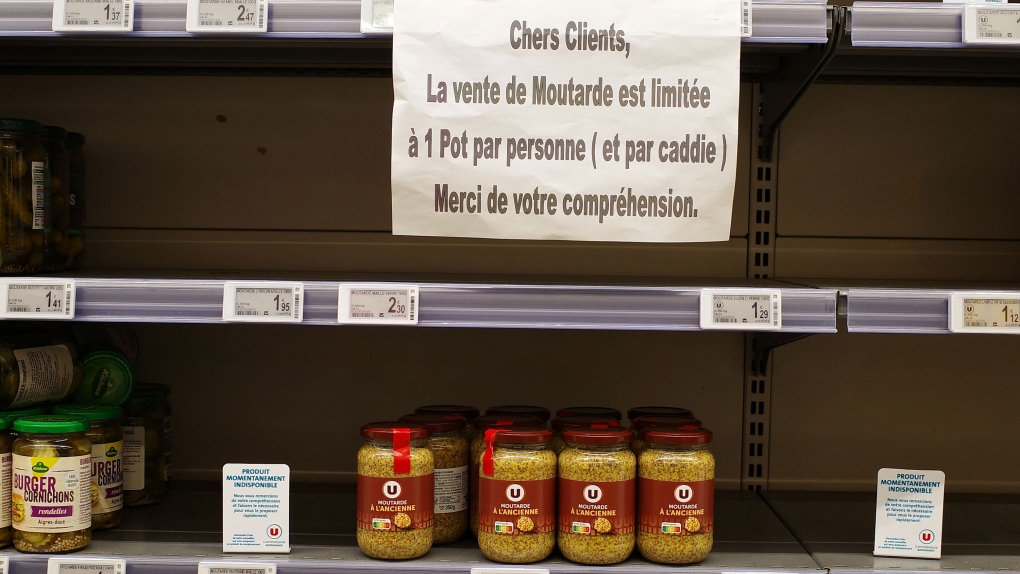 A sign in a French supermarket is pictured here in June, indicating that the sale of mustard is limited to one jar per person per trolley. (Mathieu Thomasset/Hans Lucas/Reuters/CNN)

Hoping to bring some mustard home from France? It might actually be the last place you'll find some at the moment. France's most famous condiment is running out, and there is no sign of its return to the shelves.

When Marc Désarménien's "Maison Fallot" mustard boutique in Dijon opens at 10 am every morning, 10 to 15 people are already queuing outside, hoping to get their hands on this now luxurious condiment.

"I don't think we have ever seen anything like it!" exclaims Désarménien. His family-run business has been producing authentic French mustard for generations.

"My grandfather has lived through two world wars and the post-war period when there were ration tickets in France, but even then there was mustard! Now whether you go to Lille, Marseille, Bordeaux or Strasbourg, nobody has any mustard left. It's all sold within a few hours."

France is the largest consumer of mustard in the world and its relationship with the condiment stretches back to the Middle Ages. In fact, Désarménien explains that it was the Dukes of Burgundy who first made it so popular by combining it with tough meats because of its digestive qualities. Over the years, it has become an absolute staple in French cuisine and a must-have for the French household.

Nowadays, a majority of French mustard is produced by large brands like Amora, owned by Unilever, and sold in supermarkets. But those supermarket shelves are now empty, sparking outrage across the country.

THE IMPACT OF CLIMATE CHANGE

Conspiracy theories have filled social media, some suggesting that the mustard's disappearance is supermarkets' ploy to inflate prices and that stacks of pots are being hidden in warehouses. But the real reason for France's mustard shortage stretches far beyond the country's borders.

Despite French mustard labeled as being from Dijon or Reims, most of the seeds it is made from are actually cultivated in Canada where they cost a lot less. But transatlantic mustard seeds have recently fallen victim to the effects of climate change.

A spokesperson for the Canadian Agriculture Ministry told CNN that "Canada exported 157 tonnes of mustard seed to France in 2021, an 80.0% decrease compared to 2020 and a 94.9% decrease from the five-year average." The reason for this decrease is that "in 2021, the Prairies — where mustard seed is primarily grown — experienced extreme dry conditions, which led to a significant reduction in yields" said the spokesperson, adding that "farmers are on the front lines of climate change."

With these extreme weather conditions hurting Canadian exports, France has been looking to other exporters for these seeds. Featuring high up on that list are Russia and Ukraine, but with an embargo on Russian exports and the war raging across Ukraine, there is no visible solution in the near future.

Max Matsepliuk works for a Ukrainian export company that liaises with farmers to export Ukrainian grain. Though Ukrainian mustard seed production is minor compared to Canadian exports, prices for mustard seed have shot up significantly in the past year and Max is confident that this is creating incentive for Ukrainian farmers to grow them. Problem is, most of the fields are in southern Ukraine -- Mykolaiv or Kherson — currently occupied by the Russians.

"The southern parts of Ukraine were the strongest in terms of cultivation of mustard seeds. In the West it's quite rare. Some farmers do cultivate" he says, "but that's not enough for potential buyers from Europe. They want more and they want consistent quality."

Matsepliuk fears the seeds have been stolen by the Russian occupiers in the south and sold at a low price. So until these areas have been freed, it is unlikely that Ukraine will be able to export any mustard seeds.

Not everyone is suffering from this mustard shortage. In fact, local French producers who don't rely on foreign exports have been overwhelmed with the current demand, and their businesses are thriving.

Ghislain Durand, who produces mustard in the town of Castelnaudary in the south of France, usually takes time off in July to enjoy the summer. But this year's demand is too good an opportunity to let pass.

"I need to keep working because of this mustard shortage, because I've got an order surplus that wasn't expected, and I need to be able to make the most of this situation," he says. "It's very beneficial for my business, I must admit. For the past four months, the increase has been so violent and quick that it's hard to follow." So stark in fact, that Durand's profits have multiplied by four.

In the tourist shops where Durand sells his mustard, people used to buy one or two pots to take home. "Now, they grab about ten!" Durand says. "They see mustard and they throw themselves at it."

With the Canadian agriculture ministry predicting good yields for the coming harvesting season, things may be getting back to normal next year. In the meantime, those who can't get their hands on local producers' precious pots are turning to alternatives, from tahini to wasabi to add that sought-after kick to their meals.