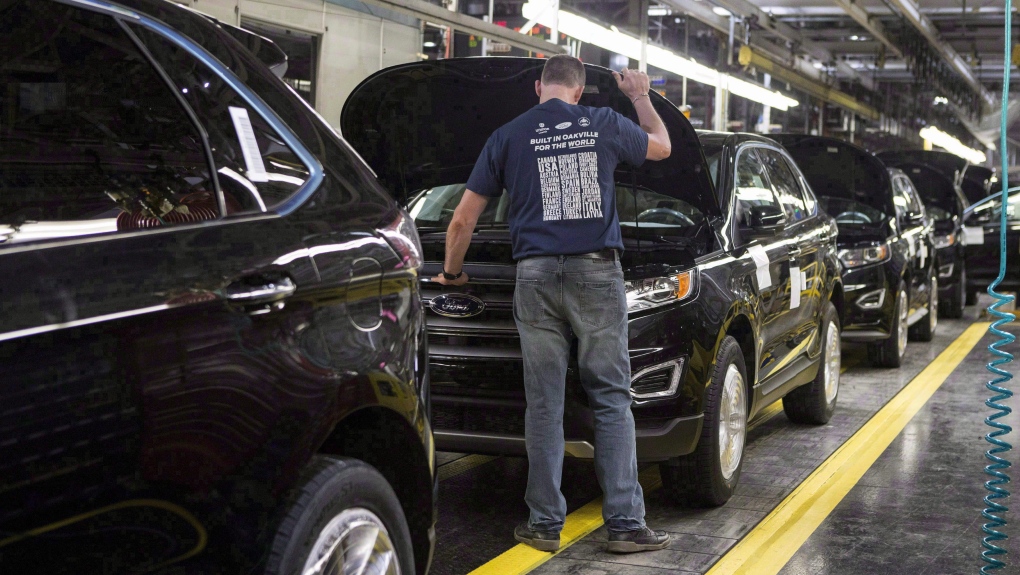 New Ford Edges sit on a production line at the Ford Assembly Plant in Oakville, Ont., on Thursday, February 26, 2015. (THE CANADIAN PRESS/Chris Young)

OAKVILLE, Ont. -- Ford Motor Co. will eliminate 450 jobs at its largest Canadian manufacturing operation in Oakville by early next year as it discontinues some models amid weak sales and a major refresh of Ford's product lineup.

The jobs represent nearly 11 per cent of the Oakville assembly plant's 4,200 workers and 5.6 per cent of Ford's total 8,000 employees in Canada.

The company said it will focus on products in the fastest growing segments to meet shifting consumer demands.

Unifor, which represents most of Ford Canada's employees, renewed its call for new products to be assigned to the Oakville assembly plant.

"For months Unifor has been urging Ford to come up with a plan to avoid this scenario," Dave Thomas, president of Unifor Local 707, said in a statement Monday.

"Ford was aware the Ford Flex and Lincoln MKT were coming to the end of their production life-cycle."

The company announced in July that it would cut jobs at Oakville because of slowing sales.

In past negotiations, the union has sought to get long-term commitments for products to be manufactured at the three companies' Ontario plants.

However, a number of factors have made Unifor's challenge increasingly difficult including President Donald Trump's outspoken defence of U.S. manufacturing, including the threat of tariffs on vehicles imported from Canada.

In addition, a number of vehicles made in Canada by the Big Three are based on older designs.

A Ford statement on Monday said that the Michigan-based company is replacing 75 per cent of its vehicle lineup but didn't specify whether the Oakville plant will get any new or renewed vehicles.

"For competitive reasons, we do not discuss future product plans," Ford Canada vice-president Lauren More said in an email.

Ford said it will update the Escape and Explorer sport utility vehicles and introduce a new pickup truck. It also plans a new Mustang-inspired electric performance utility in 2020.

The Ontario Ministry of Economic Development issued a statement saying it had been in direct contact with Ford Motor Co. and that the Ministry of Labour, Training and Skills Development will offer support for affected workers.

"We will continue to work with our partners to continue to fight for good jobs in Oakville and support the affected families," the statement concluded.

Economic Development Minister Vic Fedeli said that "we know that things are shifting, of course, but we continue to know that we make the best products in the world."