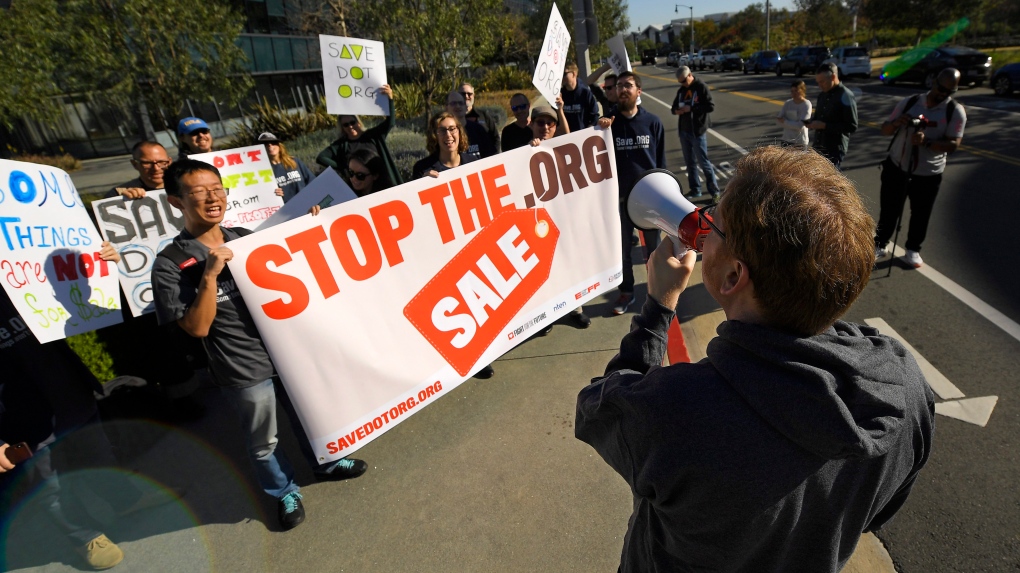 Protestors outside the headquarters of the Internet Corporation for Assigned Names and Numbers in Los Angeles on Friday, Jan. 24, 2020. The company that controls the .org online universe is putting the registry of domain names up for sale, and the nonprofits that often use the suffix in their websites are raising concerns about the move. (AP Photo/Mark J. Terrill)

LOS ANGELES -- A private equity firm seeking to buy rights to operate the internet's .org suffix said Friday it will cap price hikes and create an advisory board with veto powers to ease concerns from the non-profit community.

Ethos Capital has offered $1.1 billion to buy the Public Interest Registry, the non-profit corporation that runs the databases containing more than 10 million .org names registered worldwide. Organizations ranging from the Girl Scouts of the USA and Consumer Reports to the American Bible Society have opposed the sale, warning of potential price gouging and censorship. California's attorney general has also requested information to evaluate a deal's potential impact to nonprofits.

It wasn't immediately clear whether the concessions are enough to satisfy critics. The cap on price hikes, for instance, will expire in eight years, and most of the advisory board's initial members will be appointed by the Public Interest Registry's board.

Domain names such as apnews.com have historically been used by computers to find websites and send email, and their value grew as companies and groups adopted them for branding. The Associated Press, a non-profit, also uses a .org domain, ap.org.

Though domain names are less prominent these days as more people reach websites using search engines and apps, they are still important for email addresses, billboards and other non-digital advertising.

The Public Interest Registry is currently owned by the Internet Society, a non-profit founded by many of the internet's early engineers and scientists. In that role, the registry collects annual fees of about $10 per .org registration. The Internet Society uses some of that revenue to fund advocacy and administrative programs, which include creating technical standards for the internet.

A sale to Ethos Capital wouldn't immediately affect existing .org names or the websites that use them. Although .org is often associated with non-profit organizations, it can already by registered by anyone, including for-profit corporations and individuals. That won't change if it gets a for-profit owner.

But some critics fear that future policies could reduce protections for domain name owners. For instance, websites can suddenly become unreachable if whoever owns the registry suspends a .org name at the urging of a government or business rival, without giving the website a chance to plead its case. Critics are particularly worried that authoritarian countries could target human rights groups and other nongovernmental organizations this way.

Critics are also worried that financial pressures on a for-profit company could result in price hikes.

To address concerns, Ethos agreed Friday to limit price hikes to an average of 10 per cent per year for eight years. The Public Interest Registry had a binding 10 per cent cap that expired in June, though that restriction wasn't an average and didn't allow for higher hikes in some years.

Ethos said it will also let an advisory body, known as a stewardship council, veto proposed modifications to registry policies on censorship, freedom of expression and use of .org registration and user data. The council won't have any veto on price.

Ethos said it will make its promises binding by amending an agreement with the Internet Corporation for Assigned Names and Numbers, the Los Angeles-based organization that oversees domain names.

"We have been listening closely to stakeholder feedback -- both positive and negative -- and have been working diligently to address these specific issues head on," said Erik Brooks, Ethos founder and chief executive. "We are taking these actions to show that we stand firmly behind the commitments we've made -- and most importantly -- behind the registrants and users."

ICANN was expected to rule by mid-February on Ethos' bid. But Ethos said the registry has granted the organization an extension to March 20.