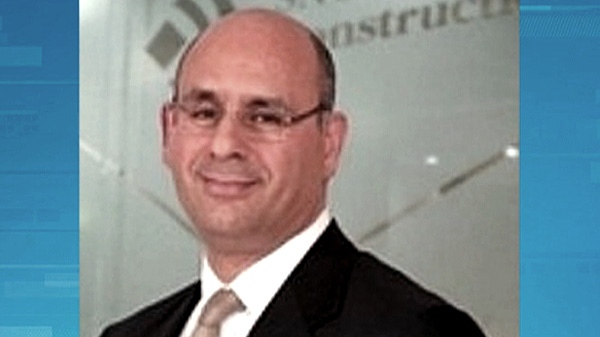 Riadh Ben Aissa is seen in this undated image.

MONTREAL -- SNC-Lavalin says it will recover $16 million after a Swiss court accepted a guilty plea from a former senior executive accused of fraud, corruption and money laundering.

The Federal Crime court of Switzerland accepted the deal Wednesday and sentenced Riadh Ben Aissa, SNC's former head of construction, to time served. Ben Aissa has already been in prison for 29 months.

In its sentence, the court also declared the Montreal-based company a "victim."

Ben Aissa acknowledged in court that he bribed Saadi Gadhafi, son of Libya's late dictator Moammar Gadhafi, so SNC-Lavalin could win contracts in the north African country. He also admitted to pocketing commissions.

The conviction paves the way for Ben Aissa's extradition to Canada, where he is accused of fraud worth an estimated $22.5 million involving the McGill University Health Centre, one of Canada's largest infrastructure projects.

The Canadian Department of Justice said it doesn't comment on foreign prosecutions, or when the convicted fraudster could return to face charges.

The Swiss court also ordered Ben Aissa, a Tunisian-Canadian, to forfeit his Paris apartment. His wife will be able to keep a Monaco apartment and a Geneva bank account in her name, according to media reports.

CBC said Swiss prosecutors dropped an embezzlement charge because it wasn't clear to what extent SNC-Lavalin knew of the payments to companies held by Ben Aissa.

SNC-Lavalin (TSX:SNC) said it was pleased that the court recognized it was "an injured party" and will be able to recover $16 million from Ben Aissa's seized bank accounts. The engineering giant said it also reserves the right to seek additional funds from Ben Aissa after he is extradited back to Canada.

The company has undergone a complete overhaul since the problems surfaced, replacing top executives and launching an ethics and compliance program to ensure it does business with integrity.

"SNC-Lavalin's goal is nothing less than to set a new standard for clean business in the engineering and construction industry," stated CEO Robert Card.

Ben Aissa is the first SNC-Lavalin executive to be convicted with bribery and corruption-related offences stemming from activities in Libya, Bangladesh, Algeria and Montreal.

Arthur Porter, the former head of the McGill University Health Centre, remains in a Panama jail fighting extradition to Canada on accusations that he conspired with Ben Aissa so SNC could win the hospital contract in exchange for a $22.5 million bribe.

Meanwhile, Rafik Benaissa said his brother was a scapegoat who only agreed to the plea deal after being subject to psychological torture for almost three years by being locked in a cell for 23 hours a day.

"He is unstable emotionally," the U.S.-based orthopedic surgeon said in an interview. "He is not the same any more. The only thing he wanted to do is sign so he could get out of that cell. That was his number one priority. He didn't care what he was signing for."

Benaissa has filed lawsuits in Canada against the Swiss for his brother's treatment in prison and SNC-Lavalin, alleging that they made Ben Aissa into a scapegoat.