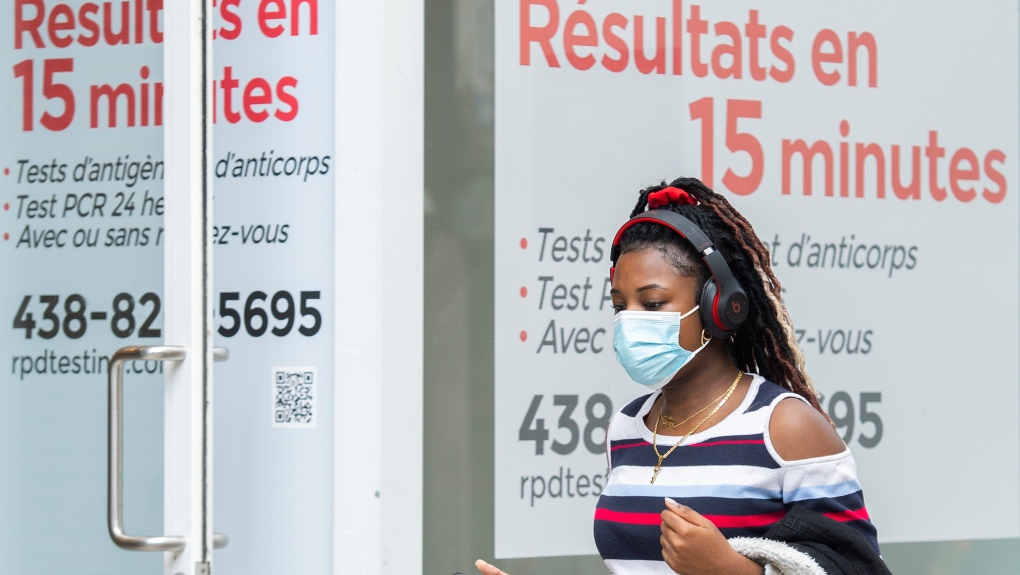 A woman wears a face mask as she walks by a COVID-19 rapid testing business in Montreal, Sunday, September 12, 2021, as the COVID-19 pandemic continues in Canada and around the world. THE CANADIAN PRESS/Graham Hughes
TORONTO -

Corporate Canada, small business owners and investors alike will be watching closely Monday as the country votes in a federal election. The major parties have made campaign pledges about housing supply, corporate tax rates and support for sectors hardest hit by the COVID-19 pandemic, among other things.

Cineplex Inc. CEO Ellis Jacob is expected to testify during the week in the company's court case against Cineworld Group PLC. Toronto-based Cineplex is seeking to recoup $2.18 billion in damages from Cineworld after the company walked away from the December 2019 deal amid a strict COVID-19 lockdown in June 2020.

Three former executives of CannTrust Holdings Inc. are scheduled to appear in court on Monday on quasi-criminal charges after their cases were remanded in July. Former chief executive Peter Aceto, former vice-chairman Mark Litwin, and former chairman Eric Paul are accused of securities charges related to an unlicensed growing scandal at one of the company's production facilities.

BlackBerry is scheduled to hold a call to discuss its second-quarter results on Wednesday. The Waterloo, Ont., based company said in June it lost 11 cents per share in the first quarter, compared with a loss of $1.14 per share or US$636 million a year earlier.

Statistics Canada will release retail trade figures for July on Thursday. The agency recently reported that retail sales rose 4.2 per cent to $56.2 billion in June as public health restrictions were eased in many parts of the country. However, it said its preliminary estimate for July suggests retail sales fell 1.7 per cent that month.

This report by The Canadian Press was first published Sept. 19, 2021.