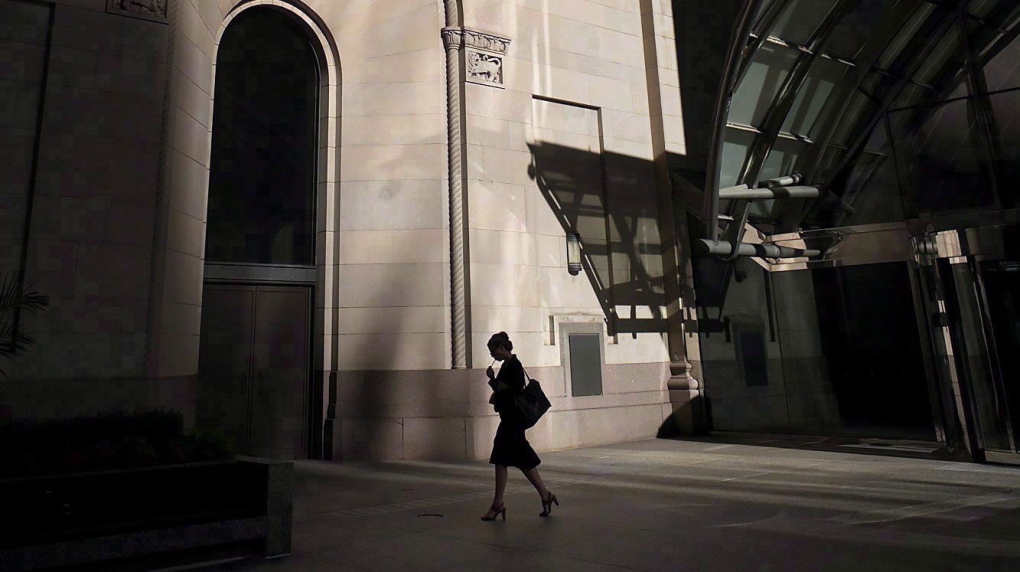 A woman walks through Toronto's financial district on July 30, 2018. THE CANADIAN PRESS/Graeme Roy

OTTAWA -- Women are more likely than men to face a risk of their jobs being affected by automation, a Statistics Canada study says.

"The COVID-19 pandemic may accelerate the implementation of new technology, as firms might look to make the production and delivery of goods and the provision of services more resilient in the future," said the report released Thursday.

It was based on a 2016 Longitudinal and International Study of Adults conducted before the virus struck earlier this year that forced business to shut down and increased unemployment.

"While skilled workers may become more productive by complementing the tasks performed by the new technology or by working directly with it, others may need to upgrade their skills," it added.

Either way, jobs may be transformed as robots and computer algorithms take over routine, non-cognitive duties, while humans specialize further in non-routine, cognitive tasks.

The study, described as the first to examine in detail the risk of automation-related job transformation, found that changes may affect women and men differently, depending on the tasks they perform and how automatable they are.

Overall, the gap remained about the same when comparing women and men with similar characteristics, such as age, education, industry and occupation.

However, several characteristics were associated with greater automation risk -- being aged 55 or older, lacking post-secondary qualifications, having low levels of literacy or numeracy proficiency, being born in Canada, having a disability, being a part-time worker, not being in a union and being employed in a small to mid-sized firm.

Men aged 55 or older were less likely to face a moderate to high risk compared with women in the same age group, at a rate of 34 per cent for men and 59 per cent for women.

And 76 per cent of women with no post-secondary qualifications faced the automation risk, compared with 60 per cent of men.

Women with a disability, who were not unionized, or who worked in a firm of 10 or few employees were also more likely than their male counterparts to face a moderate to high risk.

Statistics Canada said the differences could indicate that women and men perform different tasks that are not taken into account in the data.

It said previous research found that women were more likely than men in the same occupation to report performing repetitive tasks, and this could put them at greater risk of automation-related job transformation.

Despite the risks, there are several reasons -- including financial and legal -- why employers may not immediately replace humans with robots.

This report by The Canadian Press was first published Sept. 24, 2020.