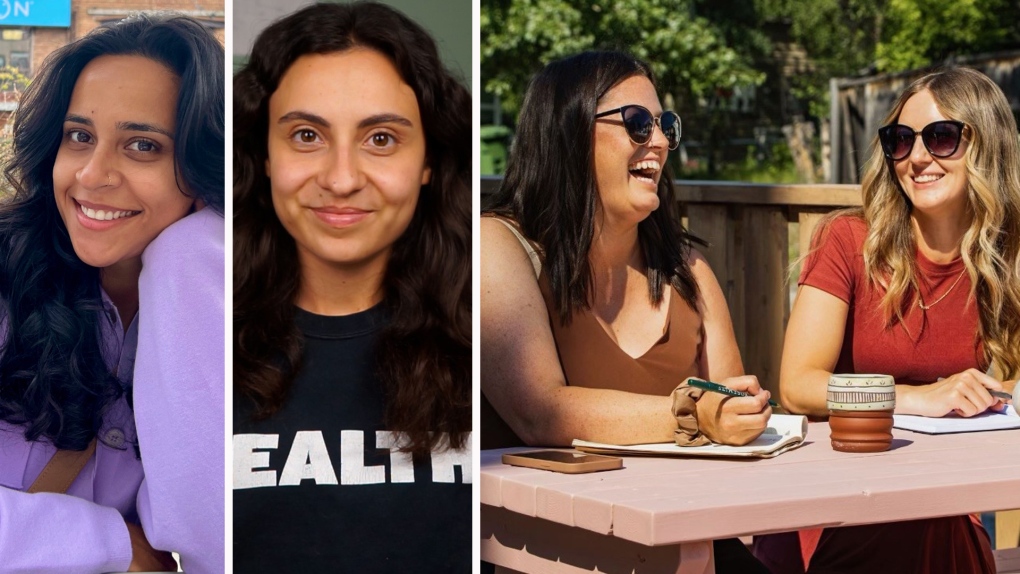 To the left, Ashna Mankotia, Cassandra Melo to the centre and Jessica Rowat and Colleen Kormos to the right.. These Canadian TikTokers are leading the charge for financial advice on FinTok. (Credit: pictures provided)

It’s been a tough year financially, with a 40-year-high inflation rate, climbing housing prices and a sharp rise in the cost of living. More Canadians are seeking financial advice on how to make the most of their money, and Canada’s younger generations have turned to an unlikely yet booming source for the answers to their problems.

Financial TikTok  – or FinTok – has become one of the most popular trends on the platform that originally attracted users from around the world with dancing videos, and is emerging as a go-to resource for Gen Z and millennial audiences looking to learn how to invest, budget or even spend more wisely.

Leading the charge are several Canadian women, all from various professional backgrounds, who’ve taken it upon themselves to pass on the financial skills and information they’ve acquired on their own.

“There is a huge gap in financial education in Canada,” Jessica Rowat told CTVNews.ca on Tuesday.

Rowat and her long-time friend, Colleen Kormos, run a TikTok page from Yukon called Two Girls Investing and have racked up nearly 50,000 followers in less than a year. Their most-watched video, which has been viewed 1.6 million times, outlines a step-by-step procedure on how to invest money through a Tax-Free Savings Account (TFSA).

“When I’m looking at investing and starting out as a beginner, a lot of the language is in U.S. terminology and … so, that’s where I thought that more Canadians need to know about this, and especially women,” she said.

Rowat has a background in health care, while Kormos works in the public sector. Both women picked up their investing and banking knowledge independently and maintain they shouldn’t be considered “financial advisors.”

“We're not trying to tell people what to do with their money, but we're trying to educate them on what is available so they can make informed decisions about their money based on their independent financial situation.”

Toronto-based Ashna Mankotia had never planned for her TikTok account to become an important financial resource for younger Canadians.

Starting her account at the peak of pandemic lockdown in 2020, her videos have now amassed more than 2.3 million likes, with one of her most popular TikToks being about her financial tracker.

“I just never sat down and thought about what my assets look like,” Mankotia told CTVNews.ca on Tuesday.

“I had no sense of what investing meant, or what it meant to have financial awareness. What was helpful to me was being conscious of my spending, that was step one for me.”

Mankotia decided to make the spreadsheet template she used for her tracker freely available on her account, as a “gift” to all her followers.

“A lot of people told me I could charge for it, but it was nice for me to know that a lot of people were deriving value from something I made for myself,” she said.

Almost half of younger Canadians aged 18 to 34 used the internet for financial advice, a 2019 Statistics Canada survey found.

Mankotia, whose account also serves as a daily vlog of her life, said that it's easier for followers to trust those with similar experiences, and who share personal elements about their lives.

Too much trust in FinTok is concerning, according to Caval Olson-Lepage, a certified financial planner with Saskatchewan-based agency Affinity Wealth Management.

“We have to view all financial advice that we are receiving with caution – especially if that advice is coming from individuals who do not have the educational background or licensing to provide that advice, regardless of the platform it is presented on,” she told CTVNews.ca in an email on Wednesday.

Olson-Lepage pointed out that after spending some time on FinTok herself, she noticed highly specific investment recommendations with “no mention of the potential risk of investing in these investments, such as a potential financial loss.”

Viewers may not necessarily understand the general nature of the advice they receive, which isn’t always applicable to one’s personal financial situation, she said.

“There is a reason why every financial ad on TV or social media by a professional comes with a warning – it is to protect the consumer and direct them to seek an expert opinion on whether that product would be a fit for them,” she said.

“Those FinTok videos do not come with that warning.”

While the financial content stream on TikTok is relatively new, seeking financial advice from online sources has been around for decades, Andreas Park, a professor of finance at the University of Toronto told CTVNews.ca on Wednesday.

“Scientific conversations aside, it was probably one of the first use cases for online discussion boards,” he said.

There has always been an element of risk, along with questions around misinformation, scams, deception and conflicting interests when it comes to advice from an online space, according to Park. He added that due diligence is required for all financial advice, regardless of its source.

“Fraudsters definitely try to tap into the whole trust thing … but, then again, TikTok is probably less anonymous as text-based social media and does not lend itself as much to fake-account click farm scams – for now.”

Cassandra Melo, a Toronto-based registered nurse with 123,000 followers on her TikTok account, @MoneywithCass, says that many younger Canadians may not necessarily trust they'll be getting proper guidance from a traditional financial advisor at a bank, due to a “lack of transparency.”

“When (someone) sees a video on TikTok, breaking down the steps in a very honest and transparent way; a lot of people really resonate with and enjoy that,” she told CTVNews.ca on Wednesday.

Park said that there is a generational disconnect between the kind of financial advice that Gen Z is looking for as opposed to their older counterparts, which isn’t necessarily being catered to by traditional sources.

“Gen Zs are, for instance, interested in crypto-assets. 99.9 per cent of financial advisors have no advice to offer other than platitudes. That does not make them look smart to young people, it makes them look uninformed and out of touch,” he said.

He also argues that banks haven’t understood how to engage with younger Canadians, which is potentially driving many away to different sources.

According to Melo, TikTok has changed the game for anyone wanting to pass on their skills and knowledge to the public, as it is relatively easier to gain a large following and views on the platform compared to YouTube and Instagram.

Her own path to personal finance came from a book called, ‘Rich Dad, Poor Dad,’ which she describes as many people’s “gateway drug,” into the world of finance.

‘Rich Dad, Poor Dad,’ which came out in 1997, is considered one of the most popular books on personal finance and currently remains a best seller on Amazon.

“I just want people to know that (they) are completely capable of learning something new,” she said.

“Anyone (can) learn this information and, empower themselves financially.”

Many successful influencers in the FinTok space have started to generate money from their content, through partnerships with financial companies.

Wealth Simple, a Canadian online investment management service, for example, has a popular ambassador program in which influencers can sign up to earn cash for referrals through their content.

According to the company’s guidelines, all ambassadors’ content “may be subject to review and oversight from a number of regulatory bodies,” and their relationship with WealthSimple must be disclosed in all their videos pertaining to the company.

TikTok requires all its users to enable a “branded” toggle on their sponsored content which adds an advertisement disclosure on these videos, a service that the company says is available globally.

It is also important for influencers to choose their collaboration partners carefully and be open about it to their viewers to avoid losing their trust.

“I only agree to a paid video if it meets a couple of my criteria i.e. it’s a brand or product I use and love, and if I believe the information in the video will be helpful,” Melo said.

“Personally, I’m very careful with choosing who I work with and prefer to work with well-established brands or companies.”