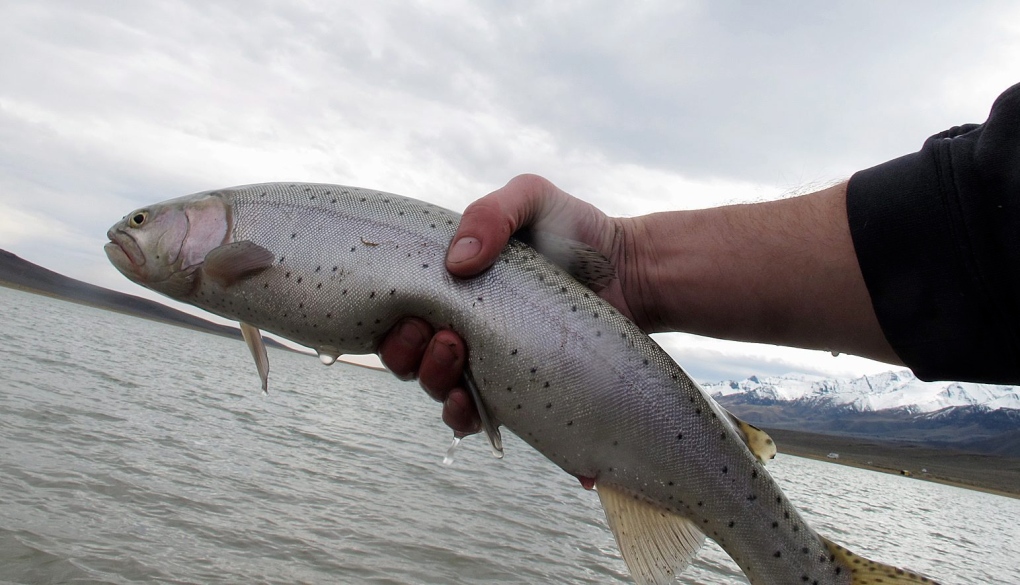 A female cutthroat trout is returned back to Mann Lake near Burns, Ore. on March 8, 2014. (AP /East Oregonian, Tim Trainor)

The federal government has declared dozens of streams and rivers in a scenic section of southwestern Alberta as critical habitat for an endangered trout species.

Wednesday's announcement was welcomed by environmentalists, but it might complicate plans for a mountaintop coal mine proposed for the area.

The Alberta Wilderness Association immediately said it would drop a lawsuit against Ottawa that sought to force the federal government to issue the order. Under law, critical habitat for native cutthroat trout was supposed to have been declared more than a year ago under the previous Conservative government.

"We're happy that we likely do not have to follow through with it," said Brittany Verbeek, the association's conservation director.

Verbeek said the order lends protection to the creeks, streams and tributaries draining into the Oldman and Crowsnest rivers that are home to the trout. The fish were already protected under the Fisheries Act; now their home is protected under the Species At Risk Act.

"It just means that the area surrounding where the fish live has that increased protection."

Changes to the stream, such as increasing its sediment load, are now forbidden.

The Alberta government is considering an application from a subsidiary of an Australian company to build a coal mine on a mountaintop in the protected habitat. Benga Mining proposes to turn 12 square kilometres on the top of Grassy Mountain near Blairmore into a terraced site.

At the same time, the province's energy regulator is investigating the company for a release of coal into Gold Creek, one of the streams included in the critical habitat declaration.

A recent survey by a fisheries biologist found virtually all southern Alberta streams that spawn native trout are threatened by industrial development or overuse.

Lorne Fitch studied 54 small rivers and streams that flow into the Oldman River and which hold bull and cutthroat trout, largely in the area now considered critical habitat. He found nearly all of them face damage from logging roads, energy development and off-highway vehicle trails.

Scientists suggest land that contains trout streams shouldn't have more than just over half a kilometre of trail, cutline or road per square kilometre. The disturbance density in parts of the Oldman watershed is nearly 10 times that.

Cutthroat populations are estimated at five per cent of historic levels.