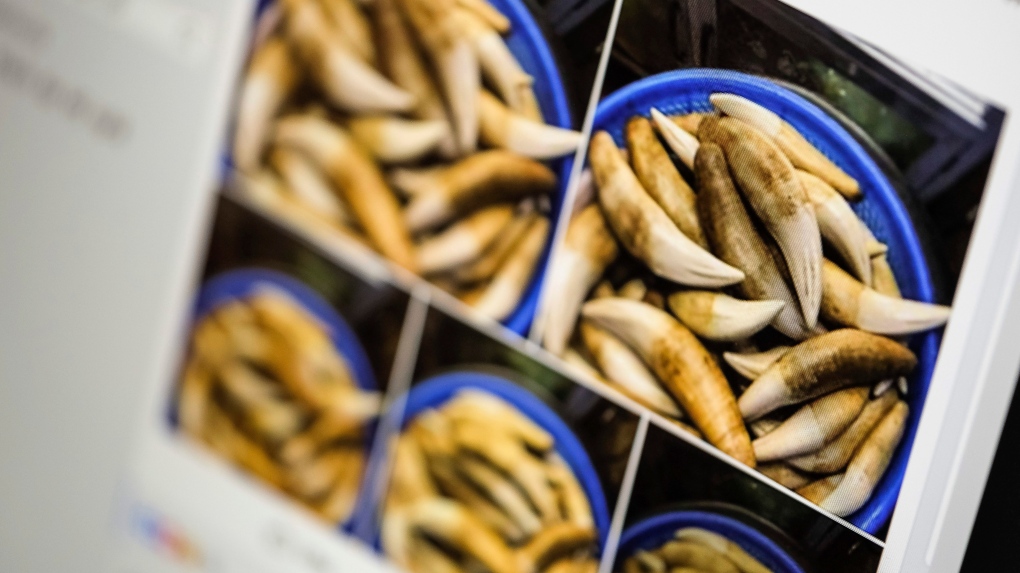 This screen grab from a Facebook group and photographed on a computer screen in Washington, Monday, April 9, 2018, shows what appears to be a bucket of tiger teeth offered for sale on a Facebook page. (AP Photo)

In a secret complaint filed with the Securities and Exchange Commission, wildlife preservation advocates allege that Facebook's failure to stop illicit traders using its service for illegal activity violates the social network's responsibilities as a publicly traded company.

In a statement Tuesday, Facebook said its community standards forbid the sale of wildlife, endangered species or their parts. The company said it removes groups engaging in illegal conduct when it's identified.

Facebook CEO Mark Zuckerberg testified Tuesday on Capitol Hill. Asked about wildlife trafficking and other illegal activity happening on Facebook, he said the company could do a better job.

By the end of the year, Facebook plans to have more than 20,000 people monitoring the site for inappropriate content.

"Over time, we're going to shift increasingly to a method where more of this content is flagged upfront by AI (artificial intelligence) tools we develop," Zuckerberg said.

The complaint, a copy of which was provided to The Associated Press, was initially filed in August on behalf of an undercover informant represented by the National Whistleblower Center, a non-profit legal advocacy group. The identity of the informant, who recorded video of face-to-face meetings with wildlife traffickers set up over Facebook, has been kept confidential out of safety concerns.

The SEC declined to comment Monday on whether the whistleblower complaint triggered an investigation of the company.

"Facebook is not an innocent bystander to these crimes," said Stephen Kohn, executive director of the National Whistleblower Center. "Facebook sold advertisements on the very pages the illegal ivory was being marketed."

Facebook said Tuesday that it stopped displaying paid advertisements inside group pages last year. However, the wildlife advocates provided screenshots showing what appear to be corporate ads showing up on individual news feeds along with illicit posts hawking jewelry carved from elephant ivory -- if the individual has joined the private groups.

"Our community standards do not allow for poaching, the sale of wildlife, endangered species or their parts, and we immediately remove this material as soon as we are aware. We have many systems in place to prevent the sale of illegal goods, and do not allow ads around the sale of endangered animals," Facebook said in a statement. "We are saddened to hear these reports and are investigating this issue."

Facebook is one of 20 technology companies that last month joined the Global Coalition to End Wildlife Trafficking Online, which was organized by Google and the World Wildlife Fund. Weeks after the March 7 announcement, an AP reporter was able to see scores of internationally banned wildlife products for sale in public and private Facebook groups, most based in Southeast Asia.

Among the items available were belts made from what appeared to be the fur of Bengal tigers, a critically endangered species with only about 2,500 still living in the wild. Also advertised were horns from black rhinos, a species heavily targeted by poachers with little more than 5,000 still roaming Africa.

The allegations tying Facebook to the illegal trafficking of wildlife are surfacing while the company is already scrambling to recover from a privacy scandal that has wiped out $79 billion in shareholder wealth during the past three weeks.

The crisis stems from revelations that Cambridge Analytica, a data-mining firm connected to President Donald Trump's successful 2016 campaign, had exploited weaknesses in Facebook's privacy controls to collect personal information about 87 million people without their consent.

The SEC complaint may trigger other lines of inquiry about how much of Facebook's annual revenue of $41 billion has been generated by ads running on pages featuring illegal activity, such as the sale of elephant ivory and tiger teeth.

Facebook hasn't disclosed that some of its revenue may be tied to illegal trafficking in wildlife in regulatory filings that are supposed to outline various risks and other threats that could crimp its profits or stock price.

Trafficking investigators say they have seen no drop off in the illegal products offered for sale on Facebook after prior public pledges by the company to crack down. They are calling on federal security regulators to force Facebook to immediately freeze accounts being used by illegal traffickers and co-operate with international law enforcement to identify the individuals involved for prosecution.

"The amount of ivory being traded on Facebook is horrifying," said Gretchen Peters, executive director of the Center on Illicit Networks and Transnational Organized Crime, which has analyzed online groups where wildlife goods are being marketed. "I have looked at thousands of posts containing ivory, and I am convinced that Facebook is literally facilitating the extinction of the elephant species."