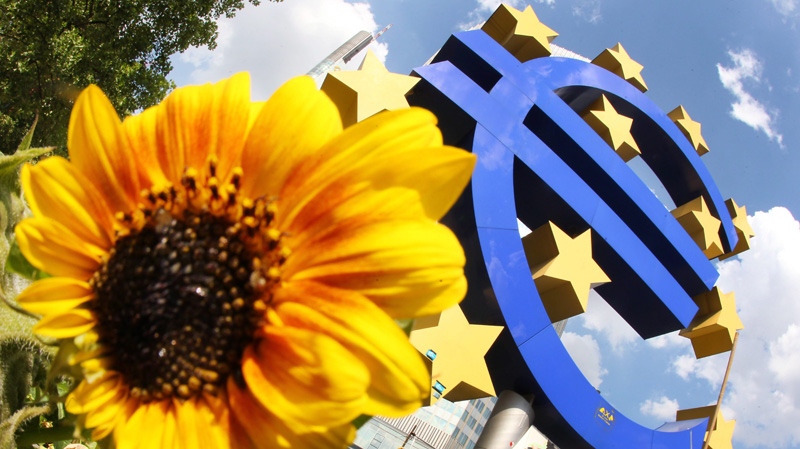 A sunflower stands in front of a Euro sculpture in Frankfurt, Germany, on July 5, 2012. (AP / Michael Probst)

FRANKFURT -- The European Central Bank is ending the massive stimulus program that helped nurse the eurozone economy back to health over the past four years -- despite the emergence of new risks including a global trade war and Brexit.

Thursday's decision to stop the bank's monthly bond purchases at the end of the year closes out a 2.6-trillion euro ($3 trillion) effort that bank President Mario Draghi credits with helping put more than 9 million people in jobs.

Draghi said at a news conference that at times "it was the only driver of the recovery" in the absence of other action by governments, such as increased spending.

Of course, he conceded, "I am kind of biased" in assessing the bank's success.

The bond purchases started in March 2015 to help Europe's hesitant emergence from a debt crisis that threatened to break up the 19-country euro currency union.

The ECB says it can phase out the stimulus at year end because the economy is growing at a steady pace and inflation is near its goal of just under 2 per cent. In November, annual inflation in the eurozone was 2.0 per cent, although excluding volatile food and fuel, it remains at a weak 1.0 per cent.

Economic growth in the third quarter slowed to only 0.2 per cent from the quarter before, well down from higher rates at the end of last year.

By exiting the program, the ECB is joining a retreat by the U.S. Federal Reserve and the Bank of England from stimulus efforts deployed in the years following the global financial crisis of 2007-2009 and the Great Recession. The Fed is farther along, having ended its own bond purchases and started raising interest rates.

Looser monetary policy and low interest rates were a key factor for markets over the past few years, pushing up stocks and other assets as investors turned to riskier holdings since returns on safer holdings like government bonds and savings accounts were often near zero. The stimulus withdrawal therefore raises the prospect of increased financial market volatility. Consumers are likely to see higher returns on savings, but could face higher interest costs for mortgages. Governments could have to divert spending from social welfare and infrastructure such as road and bridges due to higher borrowing costs, or else run higher deficits.

Those effects may be slower to affect Europe because the ECB has made it clear that other stimulus efforts will remain in place for some time.

Its key interest benchmark, which steers short-term borrowing costs, remains at a record low of zero. It also has a negative 0.4 per cent rate on excess funds that banks leave at the ECB, a charge aimed at pushing banks to lend the money instead. The ECB says those rates won't go up until after the summer of 2019, and Draghi has indicated they could stay low for even longer if the economy takes a turn for the worse.

A worsening tariff war between U.S. President Donald Trump and the government of China could sideswipe Europe, which is heavily dependent on trade. Meanwhile, Britain leaving the EU without a deal to define future relations between major trading partners could disrupt the movement of parts and goods. Italy's populist government has raised worries about new debt troubles by defying the EU Commission with a plan to sharply ramp up spending to deliver on promises for more social welfare.

The bond-buying stimulus program was a way of pumping newly created money into the economy. The ECB bought the bonds from banks by electronically increasing the reserves they hold at the ECB -- creating money out of thin air. The purchases drive up the bonds' prices and, in so doing, push down their interest yields. Lower rates make credit more affordable for governments, businesses and consumers.

Draghi noted that in a sense the purchase program is not over, since the ECB has committed to maintain the size of its bond pile for an extended period by reinvesting principal as it is repaid. Otherwise the pile would shrink, gradually tightening monetary policy.

The program and its legacy remain controversial. The program has been criticized in the largest euro member state, Germany, where some argue it took pressure off financially shaky governments such as Italy to shape up their finances by artificially lowering their borrowing costs.