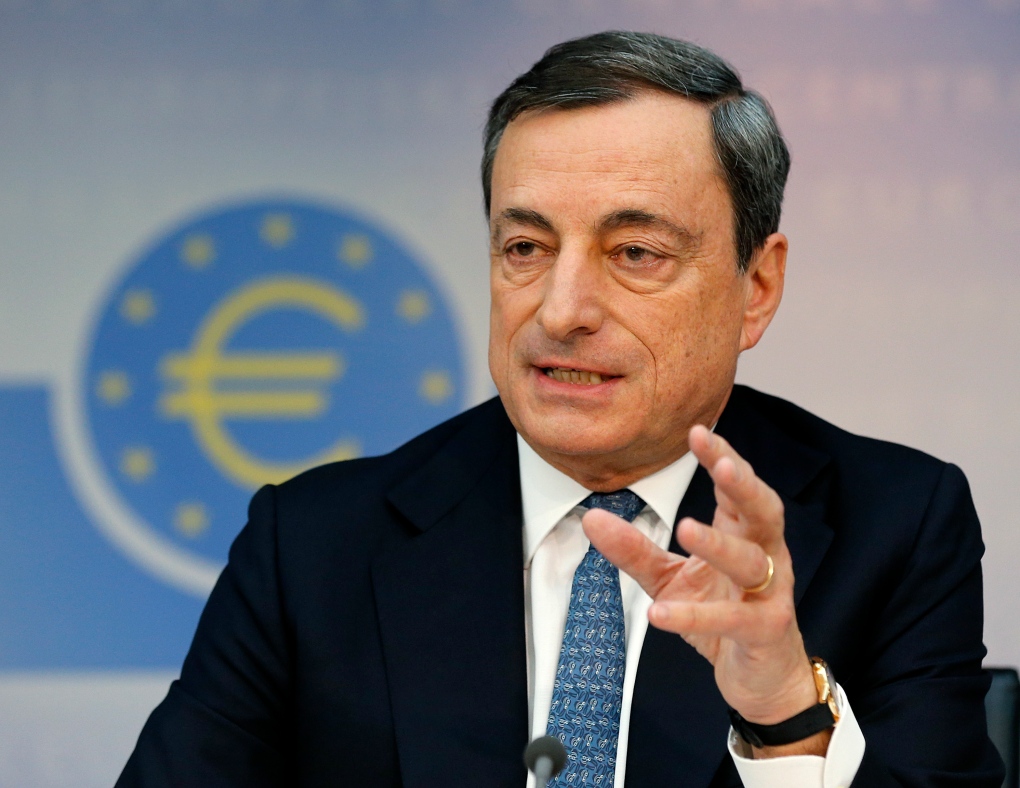 FRANKFURT, Germany -- The European Central Bank startled investors Thursday with a surprise cut in its benchmark interest rate aimed at boosting a hesitant recovery in the 17 countries that use the euro.

The bank lowered the benchmark refinancing rate to a record low 0.25 per cent from 0.5 per cent at a meeting of its 23-member governing council in Frankfurt. Stock markets rallied and the euro slumped.

Recent economic data, such as unexpectedly low inflation of 0.7 per cent, showed the eurozone's economic recovery remains weak. But most economists thought the bank would wait to offer more economic stimulus at least until December, when it will have new forecasts from its own staff.

A lower refinancing rate makes it cheaper for banks to borrow from the ECB. The hope is that would encourage banks to charge less for loans, making it easier for companies to expand and create jobs.

"It is obvious that the ECB under President Draghi has become more pro-active than under any of his predecessors," analyst Carsten Brzeski wrote in a note to investors.

The current eurozone inflation rate -- well below the ECB's goal of just under 2 per cent -- has also untied the banks' hands to try further monetary stimulus without fear that it could stoke inflation. Draghi held the door open for more cuts, although the current rate is now near zero.

"In principle, we could cut even further," he said, noting that inflation is expected to remain low for a prolonged period of time.

He offered no apology for taking markets by surprise, saying that the bank's previous stance was based on the inflation outlook -- and that was now different.

Still, many economists have said the rate cut would have a mostly symbolic impact. The problem is that banks in several countries are not passing on the lower rate because they are worried about their own finances. To address that, the ECB is beginning a year-long check of bank finances, aiming to ferret out hidden losses and force struggling banks to strengthen their finances by raising new capital or restructuring.

The ECB is also extending its offer of unlimited short-term cheap credit for banks until mid-2015. The offer aims to ensure banks do not run into problems raising ready cash to operate and can focus instead on lending, which is needed for growth. It also lessens worry over a possible cash shortage among banks when two, massive rounds of 3-year emergency credit expire in early 2015 and have to be paid back.

Analysts have said another such long-term offer could be coming, but Draghi gave little indication other than to say "we have a whole range of instruments we can activate."

The economy of the 17 European Union countries that use the euro emerged from recession in the second quarter with a modest 0.3 per cent increase in output. High unemployment and cutbacks in government spending in countries burdened by high debt continue to hold back growth.

The rate cut announcement sent stocks markets in Germany and France up about 1.5 per cent.

It also pushed the euro down sharply, to $1.3375 from $1.3520 before the announcement. That's something the ECB won't mind, as the stronger euro can hold back eurozone exports. The prospect of lower interest rates can send a currency's exchange rate down by diminishing investment returns, lowering demand for investments denominated in that currency.