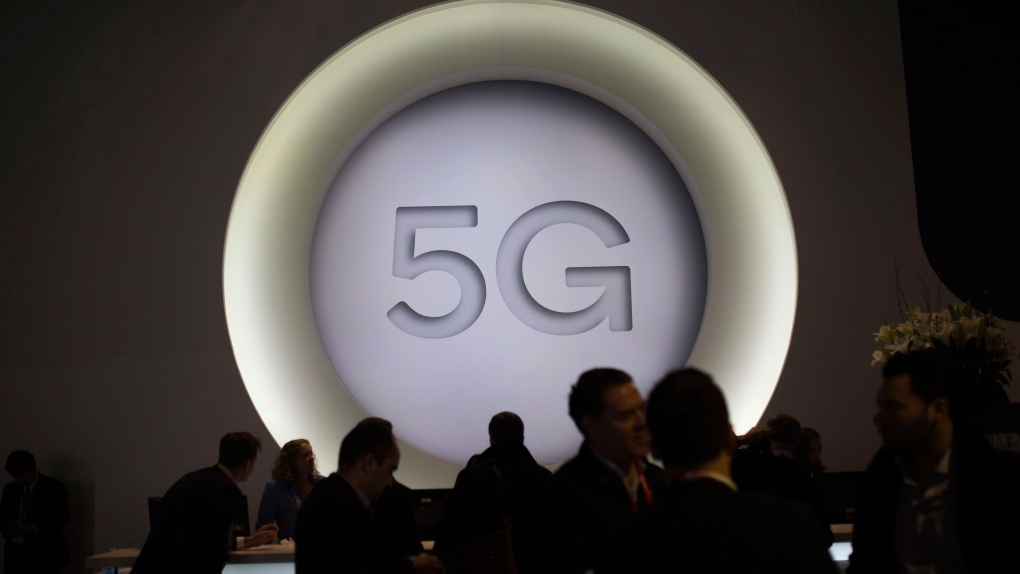 People stand next to a 5G logo during the Mobile World Congress wireless show, in Barcelona, Spain, on Feb. 28, 2018. (Francisco Seco / AP)

LONDON -- The European Union unveiled security guidelines for next generation high-speed wireless networks that stop short of calling for a ban on Huawei, in the latest setback for the U.S. campaign against the Chinese tech company.

The EU's executive Commission on Wednesday outlined a set of strategic and technical measures aimed at reducing cybersecurity risks from fifth-generation, or 5G, mobile networks. The recommendations include blocking high-risk equipment suppliers from "critical and sensitive" parts of the network, including the core, which keeps track of data and authenticates smartphones connecting to cell towers.

No companies were mentioned by name but the term "high risk" supplier was an obvious reference to Huawei , the world's top maker of telecom infrastructure equipment such as routers, switches and antennas -- the hidden plumbing through which wireless companies' internet data traffic flows.

The guidance in the EU's "toolbox" for 5G is aimed at helping national governments handle the technical challenges and geopolitical controversy involving Huawei as they prepare to build new telecom infrastructure costing billions of dollars. But it will be up to individual countries to decide what kind of role Huawei will play.

"As many critical services will depend on 5G, ensuring the security of our networks is of high strategic importance for the entire European Union," the EU's executive vice-president overseeing digital strategy, Margrethe Vestager, said at a press briefing in Brussels.

The U.S. has been lobbying European allies to ban Huawei, over concerns it could be compelled to help with electronic eavesdropping after Beijing enacted a 2017 national intelligence law. U.S. officials also worry that 5G networks would rely heavily on software, leaving them open to vulnerabilities, and have repeatedly warned they would have to reconsider intelligence sharing with allies that use Huawei. The company has denied the allegations.

The measures are similar to those taken a day earlier by Britain, which also opted not to introduce an outright ban on Huawei , disappointing the Trump administration. Instead, the British government prohibited it from supplying equipment used in the core, while limiting its role supplying antennas and base stations for the less sensitive "radio access network."

"Our view of Huawei is putting it in your system creates real risk," said U.S. Secretary of State Mike Pompeo, who was due to arrive in London Wednesday to meet British Prime Minister Boris Johnson and other officials. Pompeo said the U.S. would evaluate the U.K. policy "but our view is we should have Western systems with Western rules and American information should only pass across a trusted network."

New 5G networks are expected to drive the next wave of innovation, transmitting massive amounts of data at super-fast speeds from more objects and locations. They would, for example, help make possible "smart" robotic factories.

The recommendations are "based on an objective assessment of risks and a balanced set of possible measures," Vestager said. "They apply across the board and do not target any specific country or company."

Under the guidelines, the "risk profile" of an equipment supplier, including the likelihood it is "subject to interference from a non-EU country," should be taken into account.

The Commission wants EU member countries to implement the guidelines by April 30.

"This non-biased and fact-based approach towards 5G security allows Europe to have a more secure and faster 5G network," the company said, adding it has been operating in Europe for nearly two decades and has a "proven track record" in security.

The EU recommendations also include tightening security requirements for wireless companies and making sure they have a strategy to buy gear from more than one supplier.

Europe is poised to poised to start rolling out 5G, with wireless companies expected to launch service in 138 cities across the bloc by the end of the year.