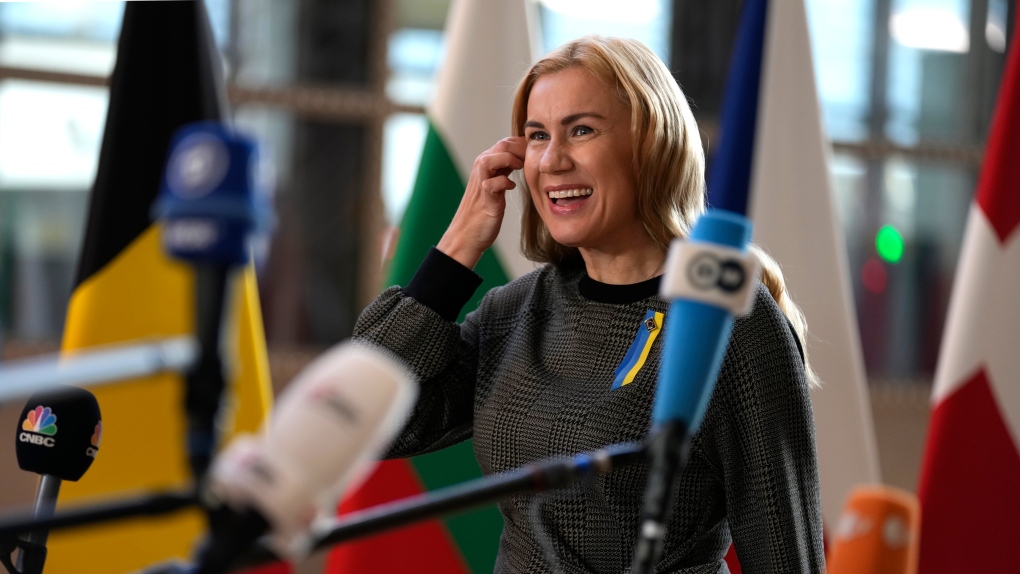 European Commissioner for Energy Kadri Simson speaks with the media as she arrives for a meeting of EU energy ministers in Brussels on Friday, Sept. 30, 2022. European Union energy ministers were set Friday to adopt a package of measures including a windfall levy on profits by fossil fuel companies, but a deal on capping gas prices remained off the table. (AP Photo/Virginia Mayo)
BRUSSELS -

European Union energy ministers on Friday adopted a package of measures to soothe the energy crisis, including a windfall levy on profits by fossil fuel companies, but a deal on capping gas prices remained off the table.

With energy prices skyrocketing across Europe since the Russian invasion of Ukraine, EU member countries reached a deal on proposals from the European Commission that the bloc's executive arm said could help raise $140 billion to help people and businesses hit by the crunch.

The measures include a levy on surplus profits made by companies producing or refining oil, gas and coal. The two other main elements of the plan are a temporary cap on the revenues of low-cost electricity generators such as wind, solar and nuclear companies, as well as an obligation for the 27 EU countries to reduce electricity consumption by at least 5% during peak price hours.

The text should be adopted next week and enter into force soon after.

Estonian Economic Affairs and Infrastructure Minister Riina Sikkut said that "the most promising measure to actually bring down the average price is still the reduction of peak consumption."

Sikkut underlined that any hardship this winter will be nothing compared with the price being paid by Ukrainians. "We can't forget that we are in a situation of war. Ukrainians are paying with their lives, so we temporarily may pay higher bills or prices in the food store," she said.

The measures, however, will not have an immediate effect on the gas prices that have been running wild as Russia reduced its supplies.

"This is just the first part of the puzzle and an immediate patch," said Czech Industry and Trade Minister Jozef Sikela, who chaired the meeting in Brussels. "We must not stop here; we are in an energy war with Russia; the winter is coming. We need to act now... Now means now. Now is not in a week and definitely not in a month."

A group of 15 member countries has urged the European Commission -- the EU's executive arm -- to propose a cap on the price of wholesale gas as soon as possible to help households and businesses struggling to make ends meet.

"The price cap that has been requested since the beginning by an ever increasing number of member states is the one measure that will help every member state to mitigate the inflationary pressure, manage expectations and provide a framework in case of potential supply disruptions, and limit the extra profits in the sector," they said.

The proposal will be discussed during Friday's meeting but has yet to gather unanimous support, with Germany notably blocking.

The European Commission has warned in an analysis that such a cap could weaken the bloc's ability to secure gas supplies on the global market. But it is open to the idea of introducing a price cap on Russian gas to mitigate the impact of the crisis while negotiating a lower gas price with other suppliers.

"We are negotiating with our reliable suppliers of pipeline gas. If this doesn't bring results, then a price cap is possible. Russia is not a reliable partner. In fact, it is at the origin of the problem," said Kadri Simson, the EU commissioner for energy. "I strongly believe we need a price cap on all Russian gas imports, at a level that still makes it attractive for them to export to Europe."

According to the European Commission, Russian gas supplies to the EU declined by 37 per cent between January and August this year.