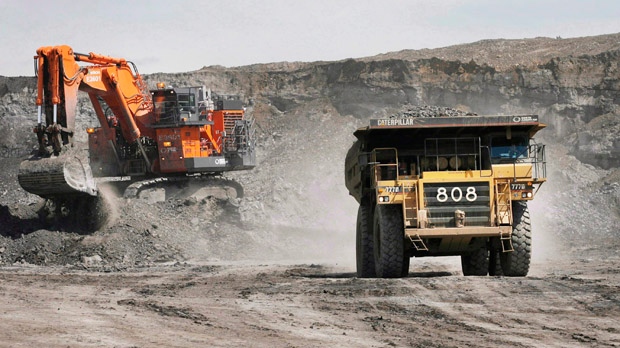 A truck carries a full load drives at the Shell Albian Sands oilsands mine near Fort McMurray, Alta., July 9, 2008. (The Canadian Press/Jeff McIntosh)

CALGARY -- Ernst & Young foresees a lot of "for sale" signs being posted on energy assets around the world -- and Canada's oilpatch is no exception.

The global advisory firm found 37 per cent of oil and gas respondents it surveyed globally are either in the process of selling assets or plan to do so over the next two years.

Barry Munro, who heads up Ernst & Young's Canadian oil and gas group, said Canadian oilpatch companies face their own unique set of challenges that have made capital costlier and harder to come by.

Those headwinds include difficulty in getting crude oil to market amid pipeline bottlenecks, stubbornly low natural gas prices, rising costs and regulatory delays.

Shedding non-core properties is one way for companies to raise enough capital to survive, and is often a more attractive option than raising equity and diluting stock prices or loading on debt.

Though the survey's results weren't broken up by country, Munro said he has a good idea what kinds of conversations are happening around boardroom tables in downtown Calgary.

"I think that virtually every energy company is thinking about whether they should be buyers or sellers of either specifics assets or the whole company," Munro said in an interview.

"Most companies in the energy business today would be concerned about their access to fairly priced capital."

Two big oilpatch names set to report their year-end earnings this week have been active in the divestiture game.

Talisman Inc. (TSX:TLM), which reports Wednesday, has been looking to better-focus its globe-spanning portfolio under new CEO Hal Kvisle.

Low natural gas prices have been particularly tough on Encana Corp. (TSX:ECA), because that's where virtually all of its focus lies. The company, which reports Thursday, has been shedding billions in non-core assets to shore up its finances.

Both have also been selling down part-interests in assets through joint-ventures. Talisman recently inked a deal with China's Sinopec in the North Sea. Late last year Encana did a deal with PetroChina to develop land in Alberta's Duvernay region.

While firms are eager to divest it's not a sure thing that there's a willing buyer at the other end, or that the path toward a deal closing will be smooth.

On a global basis, the survey found 45 per cent of respondents reported an increase in the level of buyer scrutiny.

Ernst & Young advises companies to prune their portfolios on a regular and structured basis, instead of reactively going to market with assets every time there's a financial crunch.

Firms should also approach the "full range" of buyers and not engage in what Munro calls the "cross-town M&A (mergers and acquisitions)" of yore when sellers could find buyers within a small radius of Calgary's downtown core.

As evidenced by China's CNOOC Ltd.'s $15.1-billion offer to buy Nexen Inc. (TSX:NXY) last year, along with a number of other deals, it's key to think global, Munro said.

"It's not just about putting up a for sale sign and thinking the world's going to come to you," he said.

Sellers should also make a specific case for how their properties are poised to grow. Uttering the phrase "resource play" -- industry jargon for a large resource that's technically challenging to exploit -- isn't going to cut it. There needs to be a firm handle on costs and timelines of development.

As well, Ernst & Young urges companies to prepare thoroughly for the divestiture process, lest buyers find skeletons in the closet while they're doing their due diligence.

It's also important to think about what happens after the papers are signed when it comes to staffing, information technology systems and other logistical matters.

For its report, Ernst & Young surveyed more than 567 executives from 42 countries in October and November. Of those, 54 were in the oil and gas sector.