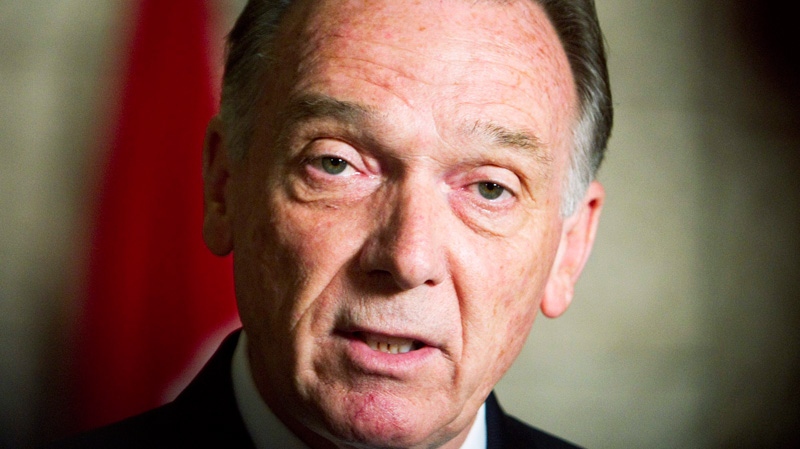 Conservative MP Peter Kent is seen in this file photo. (The Canadian Press)

OTTAWA -- The federal government has vetoed an Alberta gas project proposed by Cenovus Energy (TSX:CVE) because it would have threatened the habitat of 19 species at risk.

Cenovus Energy initially proposed to drill up to 1,275 shallow gas wells in the CFB Suffield national wildlife area, doubling the number of wells that were in place before the area was declared a protected zone.

"It's clear the adverse environmental effects that would be caused by the proposed project are significant," Kent said outside the House of Commons.

"As a result, I've decided that the project will not be granted federal approval to proceed. The environmental impacts are simply too great."

The project was assessed by a joint Ottawa-Alberta review panel that started its work in 2006 and released its findings in 2009. It then took three more years to determine how fragile the ecosystem of the area actually was, set up recovery plans for the species at risk and then make a final decision on the proposal.

The decision proves the government's critics were wrong, said Kent, adding that the new process does not rubber-stamp resource development.

"Contrary to the claims of our critics, responsible resource development is not an automatic green light for all development projects -- only those projects that meet our environmental rigour will be approved," he said.

Cenovus has the right to try again for approval with a revised proposal, but Kent held out little hope for a change of heart.

"There would be significant disruption, I would think, even under a new proposal."

A group of local and provincial environmentalists warmly welcomed Kent's decision, saying it sets a high bar for how governments should protect the prairie.

"The government's decision shows the department is serious about its commitment to the protection of the national wildlife area," Cliff Wallis of the Alberta Wilderness Association said in a statement.

"It is very good news for the species that rely on (the area) and it also sets an excellent precedent about the government's commitment to preserving the integrity of other protected areas."

The opposition NDP, on the other hand, was not impressed.

It has been obvious for years that the Cenovus proposal was a no-go, but the minister waited until the eve of United Nations climate negotiations where Canada's reputation is taking a beating, said environment critic Megan Leslie.

"It's amazing that the minister has set the bar so low that just doing his job is newsworthy," Leslie said in an email.

She said the decision comes on the heels of another non-announcement designed to hype Canada's environmental credentials. Earlier this week, Kent announced new draft regulations to cut emissions from cars and light trucks during the latter half of this decade.

"That's two pretty cynical announcements in one week, the week before the minister leaves for international climate negotiations," Leslie said.

"We always know that when there's economic activity that we're doing to see some sort of environmental impact and from my perspective I think it's important that we ensure that we're always allowing for that development to happen in a way that's environmentally sustainable so we respect that process," she told reporters in Calgary.

The CFB Suffield national wildlife area is one of the few large blocks of dry, mixed-grass prairie still existing in Canada, accounting for 30 per cent of Alberta's protected grasslands, Environment Canada says.

While a decision on the Cenovus proposal took six years from start to finish, Kent argued that under the new rules announced last spring, a decision would have been much faster.

Still, he recognized that scientists needed time to properly assess the fragility of the area and examine ways to mitigate any damage. But he said lots of time was also wasted.

Now, with government-imposed time limits on how long a panel can take to assess resource projects, panel members will be forced to focus on the job at hand, he said.